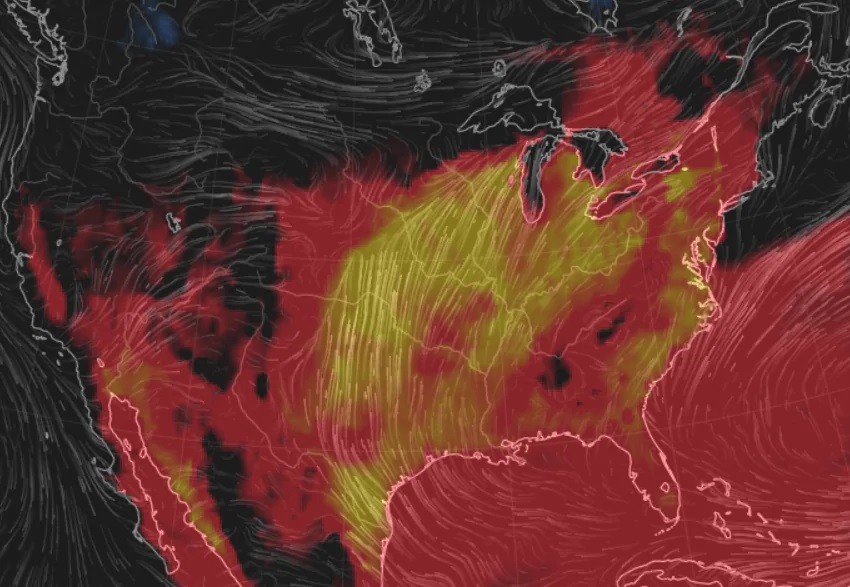 The deadly and dangerous heat wave that enveloped much of the United States over the weekend is being blamed for at least seven deaths: 3 in Maryland, 2 in Illinois, 1 in Arizona and 1 in Arkansas.

Temperatures reached the upper 90s from the Carolinas to Maine on Sunday, and the heat index hit 110 degrees in some places.

“There’s no point being out,” Washington bus driver Ramieka Darby said while taking a quick break amid temperatures of nearly 100 degrees.

In New York City, Consolidated Edison reported roughly 50,000 customers were without power as of 10 p.m. Sunday because of scattered outages, the vast majority in the boroughs of Brooklyn and Queens, according to the Associated Press.

Hundreds of outdoor events were canceled across the country, including the New York City Triathlon. Cities offered free admission to municipal pools for sweltering residents.

The Pitchfork Music Festival went ahead in Chicago but three air-conditioned “cooling buses” were provided for festival-goers.

The Chicago area is facing an excessive heat advisory just in time for @pitchforkfest. To battle the sun, festival organizers ordered 18,000 extra water bottles to hand out, are bring 3 cooling buses to the grounds + more. My latest for @chicagotribune https://t.co/uMm1BRpwUy

Major League Baseball parks also sweltered in the heat. In Cincinnati, “Let It Snow” and “Tenth Avenue Freeze-Out” played on the PA system at Great American Ball Park before the Reds played St. Louis. Cubs and Padres fans gave a standing ovation in the seventh inning when the wind suddenly shifted and began blowing in, AP reported.

On Friday, about a third of New York City’s subway lines were suspended during the hot evening commute, KUTV reported. A computer system failure stranded scores of passengers underground. Others tried to find other ways to get home. Service later resumed on the transportation system that serves more than 5 million people each day.

About a third of #NewYorkCity's subway lines were suspended for more than an hour during a hot Friday evening commute, stranding some passengers underground and sending others searching for alternate ways home.https://t.co/KHi2IAPkfD

In some areas, the heat was so intense that roads buckled. A stretch of Interstate 229 was closed in Sioux Falls when the roadway rose up and snapped under the Western Avenue bridge, according to the Associated Press.

Extreme heat has caused roads to buckle in Wichita, Kansas, where the temperature reached 100 degrees Wednesday, the Wichita Eagle reported.

The worst is on the southbound lanes, but the crack stretches nearly curb to curb. pic.twitter.com/sYME1HLKNa

Extreme heat killed 108 people in 2018, more than any other weather event. Follow this link for tips to prevent heat-related illness. Watch for yourself and your loved ones.