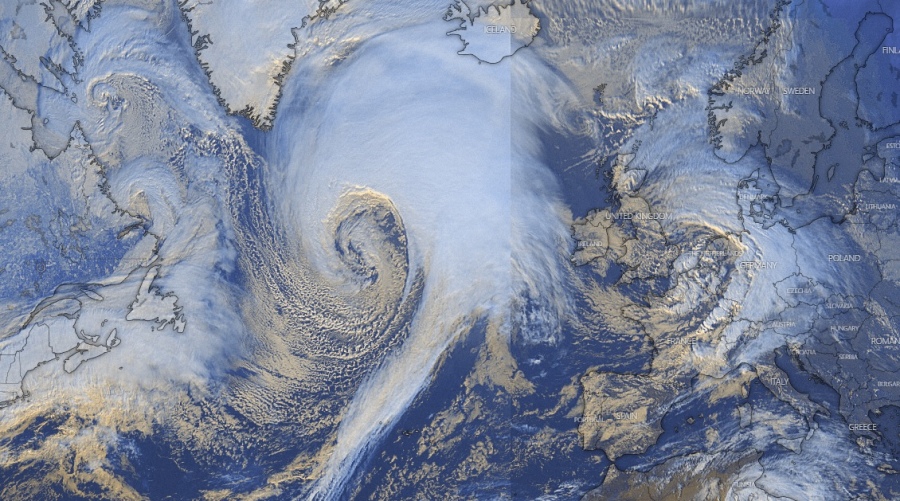 Storm Dennis has developed into a formidable “bomb cyclone”.

After Storm Ciara, less than a week ago, Bomb Cyclone Storm Dennis will lead to another dose of power cuts and major travel disruptions in the UK and northern Europe.

Dennis is now the fourth named windstorm of the season in Europe.

This incredible drop in pressure is almost two times greater than what is needed to be considered a ‘bombogenesis.’

And the explosive cyclogenesis seems to continue as the air pressure at the center of the storm is now around 935 mbar. That’s equivalent to a strong Category 3 Hurricane!

Further strengthening may put Dennis in the running for being one of the most intense North Atlantic storms on record. The top-five most intense storms all recorded a pressure of 27 inches of mercury (925.5 mb) or lower.

And again such air pressures could wreak havoc air traffic!

⚠️Yellow Warning for Wind has been issued ⚠️#StormDennis has been named and will bring very strong winds and potential for disruption to many parts of England and Wales on Saturday.

Tomorrow Iceland is doomed. The North Atlantic cyclone Dennis is about to sweep the island with life-threatening wind gusts of 180-220 km/h (112-137 mph)!

Giant waves as high as 12-15 meters (40-50 feet) are possible west of the British Isles and south of Ireland as Dennis moves through the region this weekend.

Such waves will cause coastal flooding and erosion ahead of and through the duration of the storm in western parts of Ireland, Northern Ireland, Scotland and western France, causing amazing sea foam invasion. 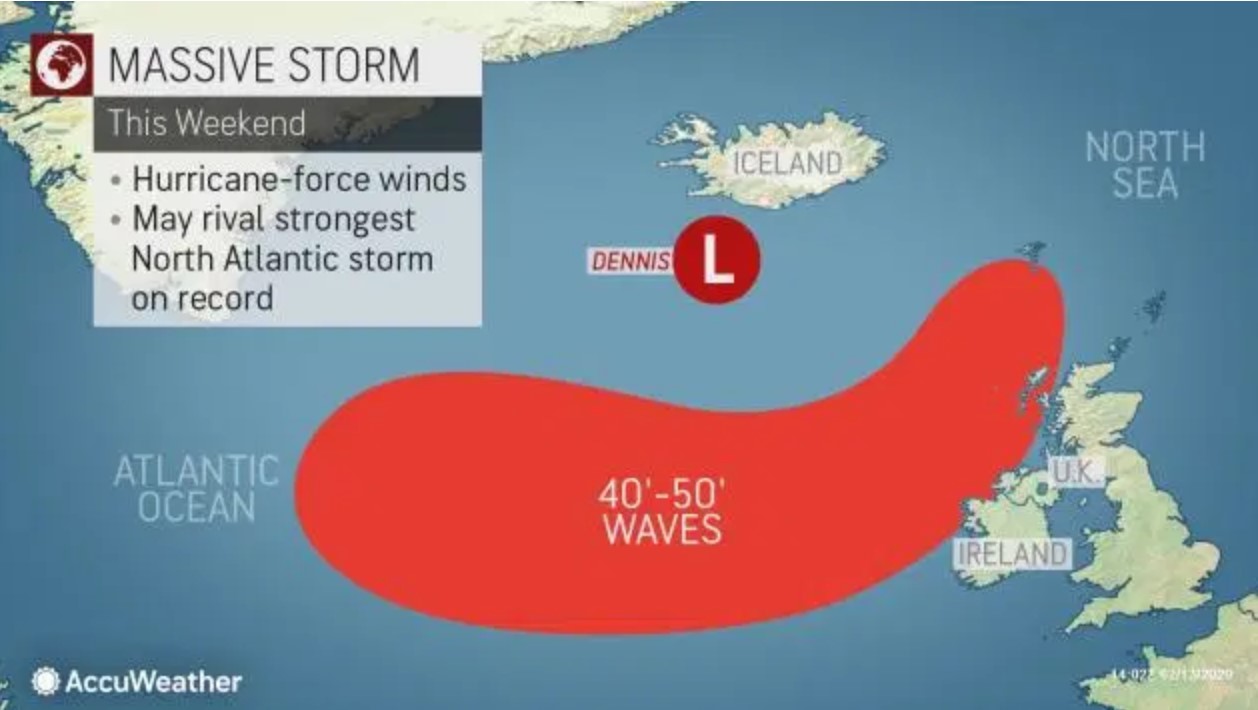 First Ireland and the United Kingdom

The storm will first hit Ireland and the UK and their major metropolitan areas like London, Manchester, Birmingham and Dublin on Saturday morning.

The south-southwesterly winds of 80-96 km/h (50-60 mph; strongest over 100 km/h (62 mph)) will sweep cross most of Ireland and the United Kingdom as early as Saturday afternoon and shuld continue through Sunday.

Consequently, the UK Met Office issued wind yellow warnings for much of the country through the weekend and into Monday for Northern Ireland and Scotland. 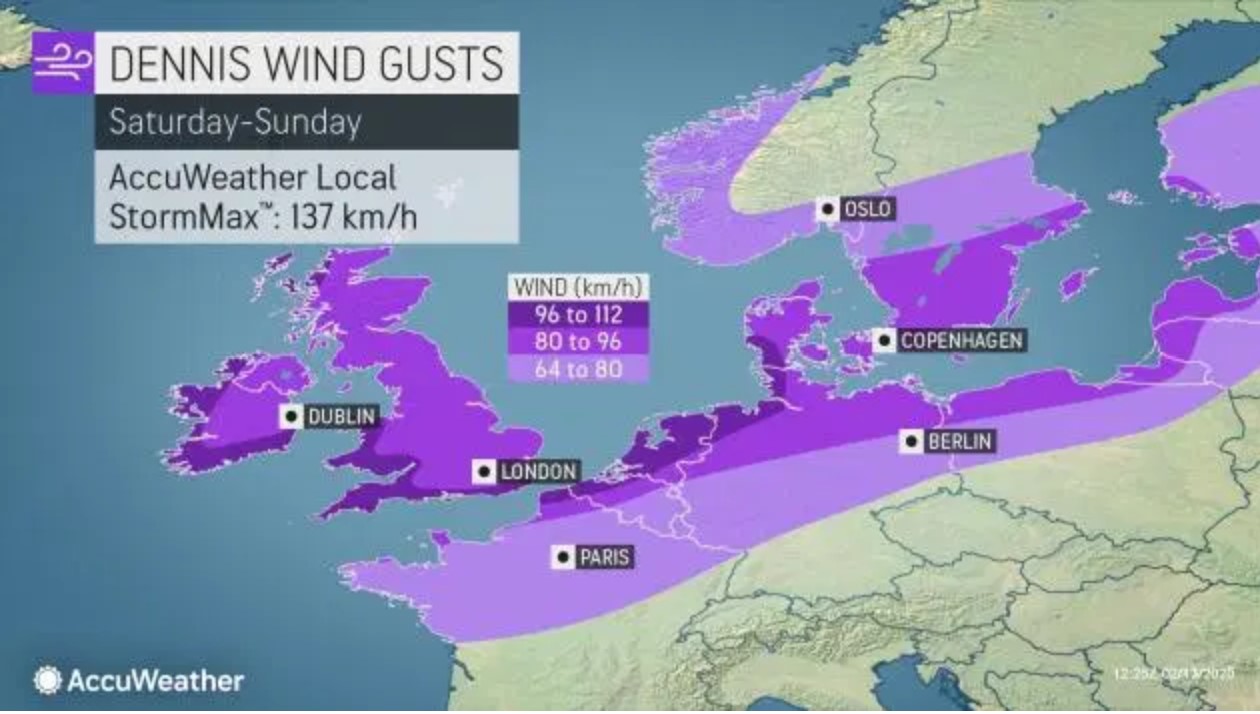 After Storm Ciara, less than a week ago, Storm Dennis will lead to another dose of power cuts and major travel disruptions.

Diverted or cancelled flights into and out of the United Kingdom area are possible due to the strong winds.

And Northern Europe: Wind and rainfall

Increasing winds will be noticeable from northern France through Belgium, the Netherlands and Germany to southern Scandinavia late Saturday, but the strongest winds in these areas will likely hold off until Sunday. 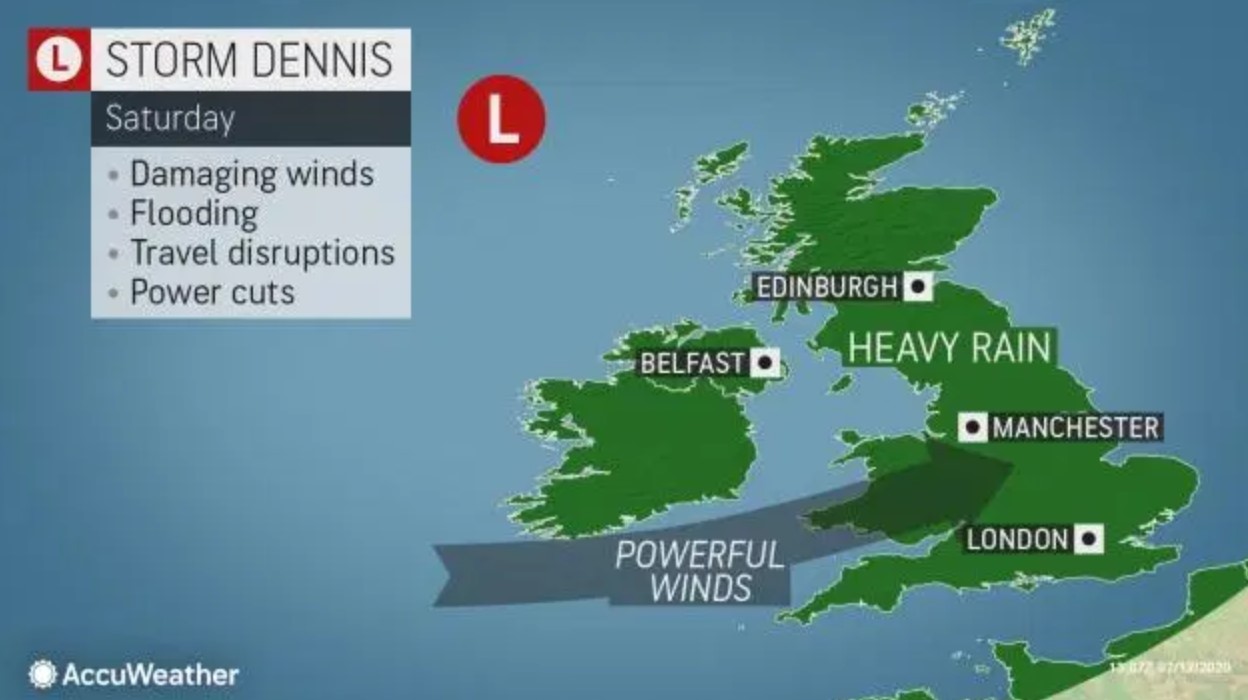 In addition to the wind, there will be lots of rain with widespread rainfall amounts of 12-25 mm (0.5-1 inch) forecast from the British Isles and northern France to southern Finland.

Windy conditions will persist after Storm Dennis. Colder air should also follow the extravagant bomb cyclone, bringing large amount of snow at higher elevations. Get prepared and be ready for this second bombogenesis in a row across Europe….