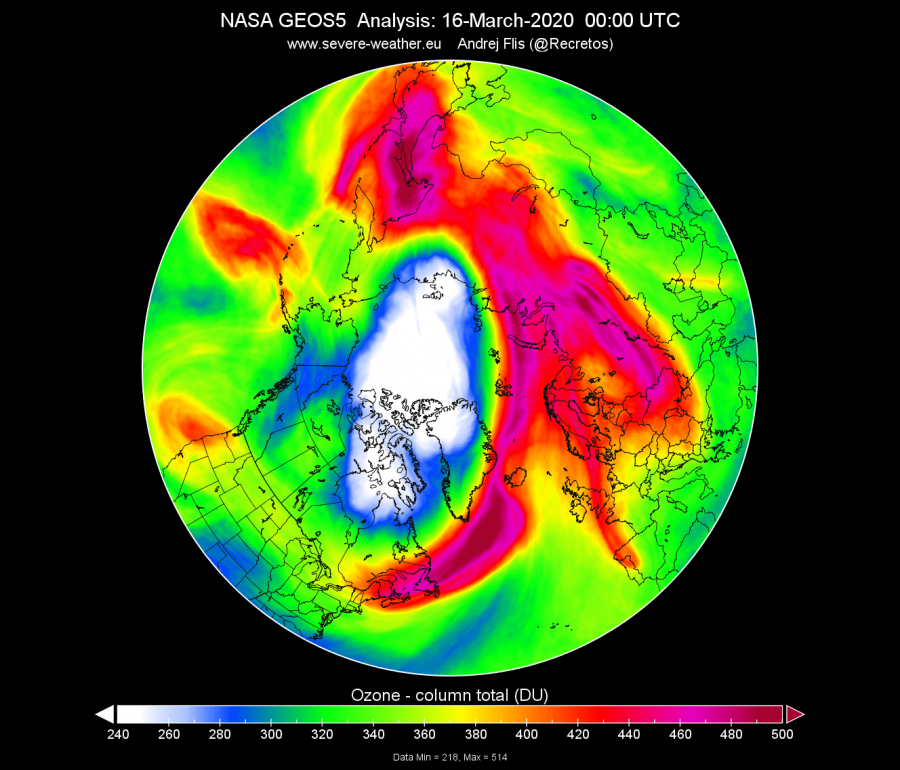 The formation of a large ozone hole is extremely rare over the Arctic regions during the late winter/early spring season.

This year is beating records of unusual weather anomalies… And we get an unusually large area of ozone depletion.

The Ozone layer is a protective zone at 20-30km altitude that protects us from dangerous ultraviolet radiation (UV).

An ozone hole is when that protective layer is gone, letting more UV radiation through 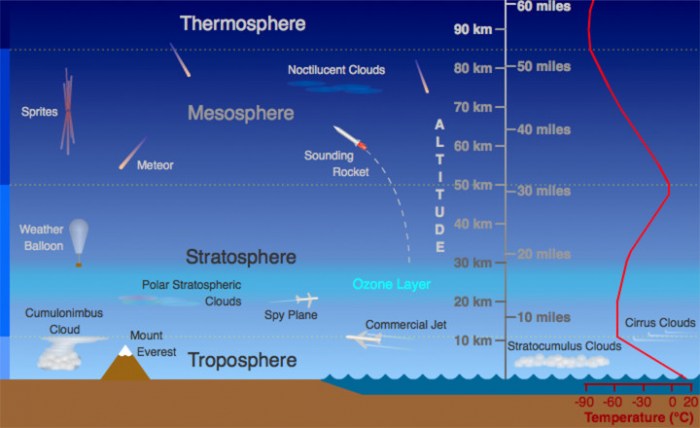 This year, the ozone has started depleting in January 2020, when a mini ozone hole formed over northern Europe.

Such ozone holes over the North Pole aren’t triggered by aerosols and their chemical destruction processes like over Antarctica, but just dispersed by specific weather circulation patterns.

These events are mostly short-lived and tend to occur every year during the cold season. 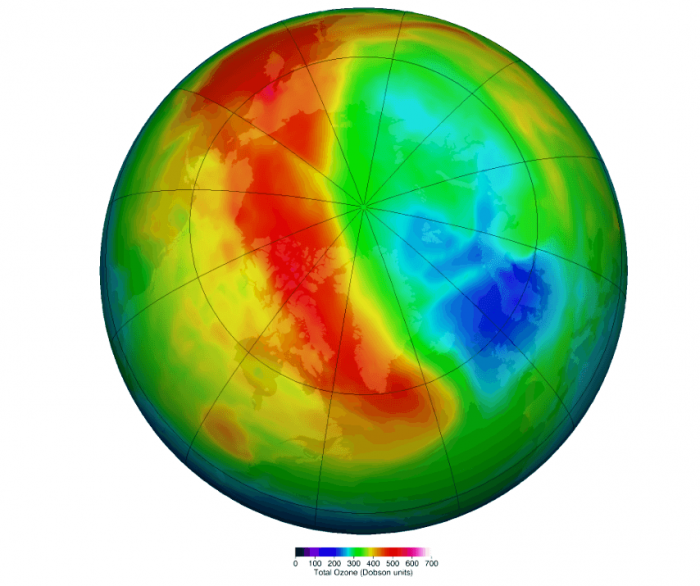 But as shown in the diagram below, the concentration of ozone in early March (red line) is decreasing although its concentration should start growing.

There is currently a giant hole forming over the Arctic, and this time it is linked to an ozone destruction process. 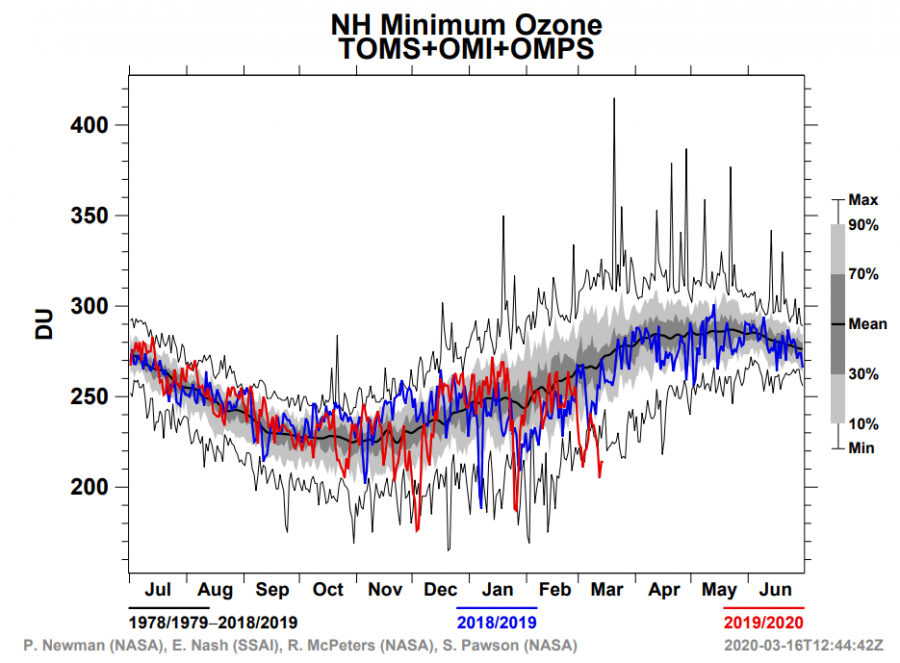 How is ozone destroyed?

In Antarctica, the ozone hole is triggered by a mix of very cold air (below -78°C), sunlight, and human emissions (CFCs and HFCs).

Cold temperature enables the formation of stratospheric clouds. Then sunlight reacts with those clouds and starts a photochemical process that destroys ozone, forming a large ozone hole.

Since sunlight is limited during Arctic winter, ozone depletion is very rare. And when sunlight reaches the pole in late February and March, the stratosphere isn’t cold enough to produce these stratospheric clouds.

But this year, the stratosphere over the North Pole is abnormally cold. Stratospheric clouds can form while sunlight reaches the pole, triggering ozone destruction, as shown in the diagram below. 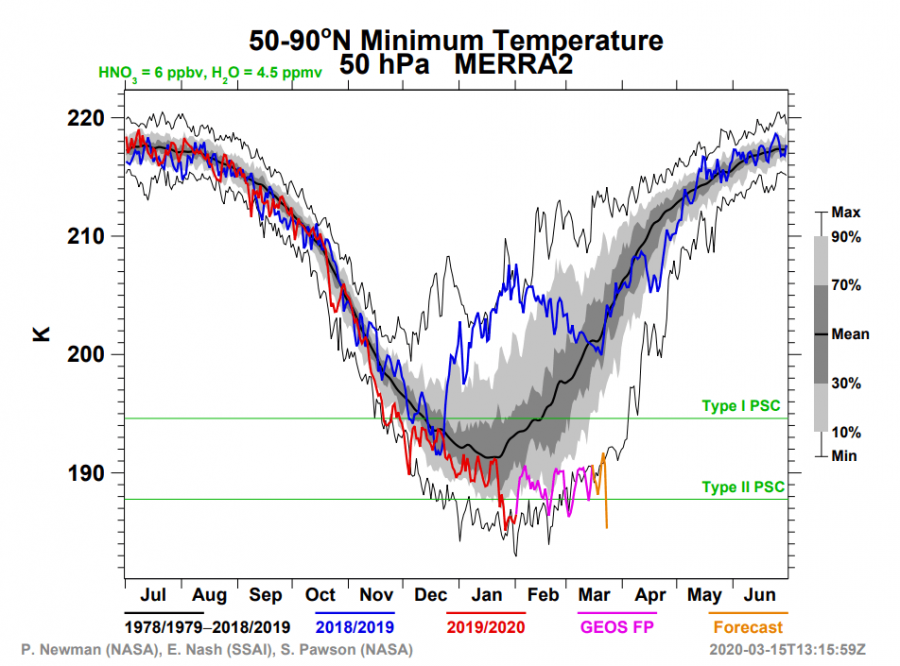 The map below shows pressure (geopotential height) and temperature at 18-20km altitude.

The pink area shows the area which is cold enough for stratospheric clouds to form, suggesting that the clouds are currently forming over northern Canada, Greenland, and the Arctic ocean. 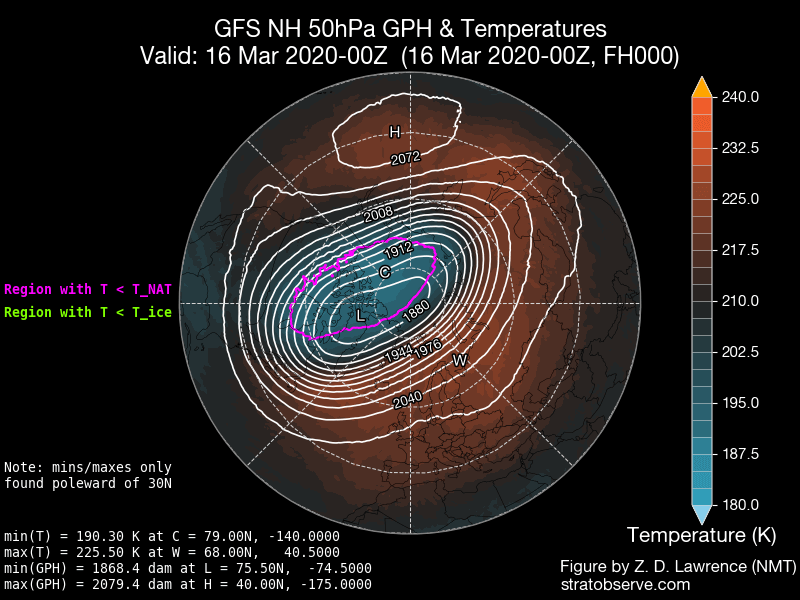 This is exactly where the ozone hole sits.

The ozone depletion over the Arctic is unusually large for the Northern Hemisphere, and has record low ozone values, going down to 217 Dobson Units at lowest.

However, it is still not as big and strong as the Antarctica ozone hole due to cooler temperatures in the south and the presence of aerosols.

But the Arctic ozone hole will slowly disappear within the next days as temperatures in the stratosphere are going to rise, becoming to warm for stratospheric clouds to forms and thus decreasing the rate of ozone depletion.