Hottest Ever Temperature Recorded North of the Arctic Circle 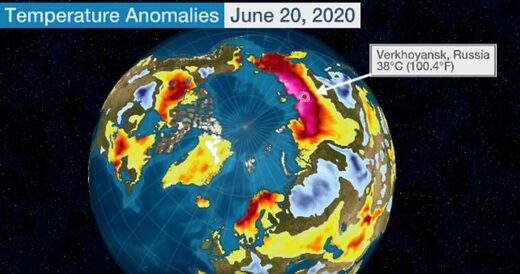 A Russian heat wave smashed an all-time record high in one Siberian town this weekend, possibly the hottest temperature on record so far north in the Arctic, continuing an off-the-charts warm year in what is typically one of coldest places on Earth.

The high temperature in Verkhoyansk, a town in northeast Russia about 260 miles south of the Arctic coast and about 6 miles north of the Arctic Circle, topped out at 38 degrees Celsius, or 100.4 degrees Fahrenheit, Saturday.

If that reading is found to be correct, that would smash the town's all-time record of 37.3 degrees Celsius - 99.1 degrees Fahrenheit - set on July 25, 1988. Temperature records in Verkhoyansk date to 1885.

It would also be the hottest temperature on record north of the Arctic Circle, according to Etienne Kapikian, a meteorologist with Meteo France.

The average high in late June in Verkhoyansk is only in the upper 60s, or around 20 degrees Celsius.

So it goes - anomalous (even record-breaking: https://t.co/DlEH9RdRkF) warmth continues in parts of Siberia (shifted a bit to the east)... 🔥

Let that soak in for a moment.

Siberia, one of the world's coldest places in winter, just reached 100 degrees (F) this year before Dallas or Houston did.

To escape the heat, children were seen swimming in a lake near Verkhoyansk, Sunday, a lake that would be frozen solid in the depths of winter, when average temperatures in Russia's "Pole of Cold" typically plunge into the minus 40s and 50s Celsius.

Expansive blocking high pressure aloft over Siberia was responsible for this latest heat wave, which has been in place since June 12.

By far and away, Russia has been the epicenter of the planet's most expansive and extreme warm anomalies in 2020.

The persistent warm and dry weather fueled wildfires which already began scorching parts of northern Russia in April and are continuing to burn in this latest heat wave.

It's also no surprise Arctic sea ice coverage along the coast of Siberia is also at a 41-year record low for this time of year, as pointed out by climate scientist Zach Labe.

Even more troubling is these temperatures appear to be occurring decades ahead of climate change projections, according to climate specialist Jeff Berardelli.

A diesel fuel spill earlier this month in Norilsk, Russia, was found to be caused by supporting pillars of a storage tank sinking into thawing permafrost, causing the tank to collapse.