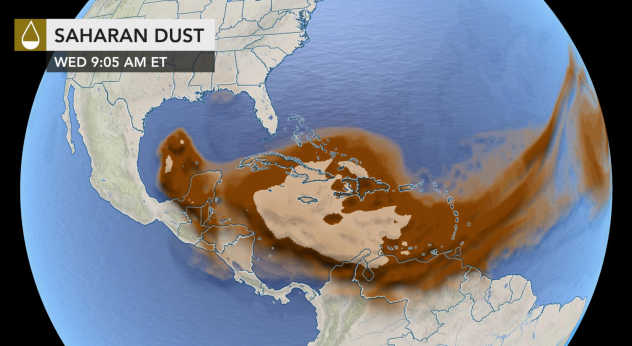 Massive Saharan dust cloud is engulfing the Caribbean as it heads toward the U.S., with air quality across much of the region falling to record hazardous levels. The phenomenon is described to be the most significant in 50 years, according to environmental health specialist Pablo Mendez Lazaro with the University of Puerto Rico.

The vast cloud of dust, known as the Saharan Air Layer (SAL), has been dubbed "Godzilla dust cloud" by some experts, the Associated Press reported.

"Dust has been flowing off the coast of Africa for several weeks now, which is not uncommon," AccuWeather senior meteorologist and lead hurricane expert Dan Kottlowski explained.

"But the extent and concentration of dust currently in the Caribbean are by far very impressive."

"The depth of the dust, as measured in various places, suggests that this is one of the most concentrated areas of dust we have seen in the past several years," he added, although he acknowledged that dust concentration records are not well established. 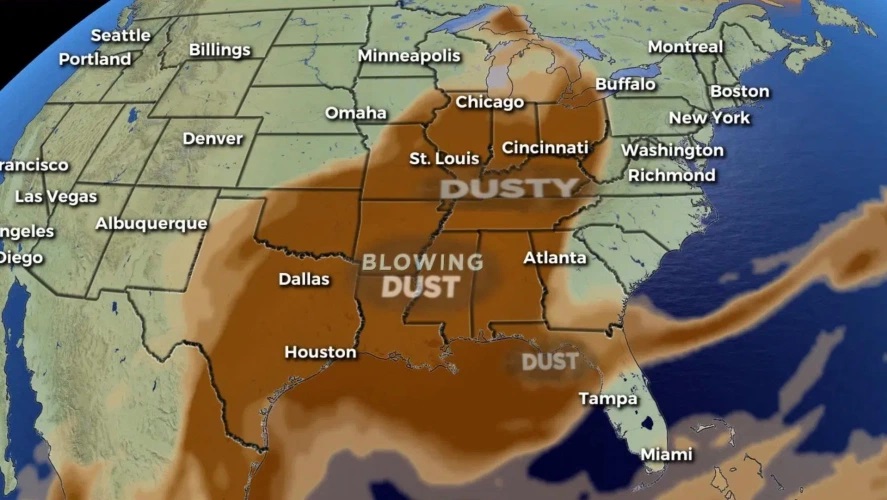 The dust reached Puerto Rico on Monday, June 22. The visibility at the airport on St. Croix, U.S. Virgin Islands dropped to 5 km (3 miles) and was limited to 8 km (5 miles) in San Juan, Puerto Rico.

According to National Weather Service (NWS) meteorologist Gabriel Lorejo, the SAL plumes have allowed 16 km (10 miles) or more of visibility at the surface.

"We have many models that indicate the highest dust concentration is from around 1 524 m (5 000 feet) all the way down to the surface. It’s pretty extreme," he said.

Kottlowski noted, "this is probably the worst air quality caused by Saharan dust in recent memory."

"Dust particles are like any other pollution such as smoke. Low-level dust is usually a very short-term issue such as when one experiences dust in a dust storm."

He continued, "But this is different because it's not local dust, it's dust that originated at least 6 437 km (4 000 miles) away and has been falling out to the ground since then"

#SATELLITE SPOTLIGHT: This #SaharanAirLayer (#SAL) tracking animation shows how the plume of #dust and #sand from the #SaharaDesert has moved westward over the last 5 days. Areas of red and pink represent the dry, dusty air as seen from @NOAA's #GOES16 🛰️ pic.twitter.com/mh7gULXFSU

8 am: Preliminary measurements from #SaharanDust in #PuertoRico are between 350-380 ug/m3 (PM10) and AQI estimated 173-237: VERY UNHEALTHY 🔴. According to Dr. Olga Mayol, @UPR_Oficial this is a historic event in PR, unseen in 50-60 years. Image from #Villalba 📷 Osvaldo Burgos. pic.twitter.com/oVAyOOViCa

A "Godzilla" Saharan dust cloud is covering parts of the Caribbean and is headed to the southern U.S.

Some meteorologists say the dust cloud is the most dense in 50 years. pic.twitter.com/M05Zwpxy59

Lazaro also pointed out that conditions are dangerous in many Caribbean islands. Many health specialists were concerned about patients battling respiratory symptoms to COVID-19.

He added that the concentrations were so high in the previous days that it could have effects, even on healthy individuals. Limited visibility and extremely hazy conditions were reported from Antigua to Trinidad and Tobago.

"This is the most significant event in the past 50 years," Lazaro noted.

Sahara Dust entry from Dioni Marin Photography's eye in the sky. How is the dust looking from your point of view? Location Belize, C.A. #dionimarinphotography #SaharanDust pic.twitter.com/LfFYXA6i2m

As of Wednesday morning, air quality in Puerto Rico was fair, according to data from Plume Labs. However, SAL has blanketed some cars outside in a fine layer of dust.

A small tropical wave headed toward the Caribbean is expected to ease the conditions by Thursday, June 26, according to Jose Alamo, a meteorologist with the NWS San Juan.

A thin layer of #Saharandust is in the surface of our cars, exterior tables, fans, etc. This extraordinary dense SAL was lifted from the Saharan desert and traveled to the Caribbean. The red color comes from the iron minerals that travel in this layer. pic.twitter.com/DRLP13kXRp