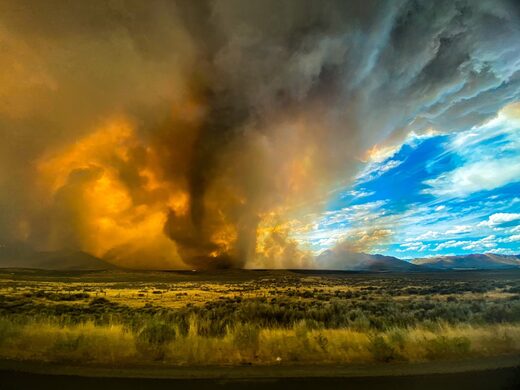 The Loyalton Fire currently raging in California, as seen in this one-hour timelapse, produced a fiery vortex on Saturday, leading the National Weather Service to issue its first-ever tornado warning for a twister spawned by fire.

Apparently running out of cataclysmic events to throw at us this year, Mother Nature decided to reach deep into her bag of tricks and pull out a Biblical classic: swirling hellfire.

The National Weather Service issued its first-ever tornado warning for a twister spawned by fire early Saturday afternoon after a wildfire in Northern California produced a towering, flaming vortex. While not unheard of, fire tornadoes are some of the rarest weather phenomena on Earth, and meteorologists are saying this is the first time one's received an official tornado warning.

The NWS Reno office issued a warning for residents in Lassen County, California shortly after 6 p.m. ET on Saturday after a pyrocumulonimbus cloud "capable of producing a fire induced tornado" emerged from a wildfire in nearby Loyalton. Officials also cautioned people to stay clear of the eastern Sierra Valley and issued evacuation orders to several of the surrounding communities.

Onlookers shared footage of the blazing vortex online, and it is nothing short of terrifying. The images looks like something more at home in a blockbuster disaster flick than a newsreel. In the image of the reported scene on the ground shared below, the towering cloud kicked up by the Loyalton Fire dyes the sunlight orange while obscuring the mountains. The outlines of the firenado rising over the landscape are clear, though, amid the chaos. Other images shared on Twitter appear to confirm the tornado on the ground, swirling and sucking smoke up into the sky.

The Loyalton Fire, which remains largely uncontained as of Saturday evening, has been burning since Friday and has reportedly grown to more than 2,000 acres. Freakishly hot weather responsible for rolling blackouts across California along with gusty winds and dry conditions have allowed the flames to spread rapidly. These types of conditions are becoming more common due to the climate crisis, leading to larger and more destructive wildfires across the West. Despite that, firenados remain thankfully rare (for now).

Only a few fiery vortices have ever been recorded, including 2018's Carr Fire. What went on to become one of California's most destructive and largest fires on record also spawned a firenado with winds of 143 mph (230 kph) and killed at least one firefighter. Their rarity has made them somewhat of a mystery.

Exactly how a fire tornado becomes, well, a firenado is still an area of very active research. What scientists do know, though, is that a key part of the formula to spin up a firenado is that a wildfire has to be monstrous enough to essentially form its own weather system. When that happens, pyrocumulous clouds and pyrocumulonimbus thunderclouds form as the hot air rises above the flames and goes through the cycle of cooling and condensing in the upper atmosphere.

What happens next, though, is what researchers are still trying to work out. One theory is that if those updrafts of superheated air rise and rotate, you get a spinning whirl of fire and smoke stretching into the sky. Another possibility is that an area of horizontal rotating wind due to the turbulence near the ground gets swept up and tilted vertically. Good on the scientists for working to figure this out, but either way, it's safe to say you don't want to be anywhere near a firenado when it forms.

The National Weather Service's Reno office later announced on Twitter that the fire tornado had weakened by around 7 p.m. ET, though it warned that "extreme fire behavior" will continue into the evening as gusts are expected to remain in excess of 60 mph (97 kph).

A fire tornado in California because it wouldn’t be 2020 without one https://t.co/5HbJVsugVm

Look at this firenado in California this evening! pic.twitter.com/2AXAwJZ8vW