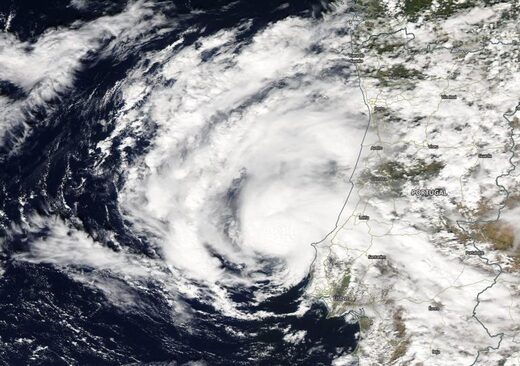 The first ever subtropical storm has been recorded in an occurrence described by meteorologists as a "historic fact".

According to weather experts, subtropical storm Alpha, which barrelled along the Portuguese coast and through some parts of Spain last weekend, was the first event of its kind to be registered since weather records began.

This was first put forward by Spanish meteorologists and later confirmed by the Portuguese Met Office (IPMA).

In some cases along the Portuguese coast, particularly the stretches along the Algarve and up to Lisbon, entire beaches were consumed by rapid rises in sea levels, while winds of up to 100km/h were registered in some inland locations.

On 18 September, 522 occurrences were registered by civil protection authorities due to strong rain and wind which wreaked havoc in various parts of the country.

Newspaper Observador reported two tornados in Beja and Palmela, which occurred due to supercells.

The districts of Leiria, Lisbon and Faro were the most affected by the unseasonably bad weather.

According to Visão magazine, Juan Jesús González Alemán, a researcher in atmospheric dynamics, quoted by Spanish daily newspaper El País, has no doubts: "it is a historical fact."

Rubén Del Campo, spokesman for the Spanish meteorological agency, added: "It was a very profound storm and, above all, rare for the time of year and for the latitudes where it passed."

Weather experts appear to be in agreement, Visão reports, that there seems to be a growing movement of weather phenomena more typical of the American coastline on Europe's doorstep. Last year, three other tropical phenomena landed in Portugal and Spain, whereas the norm would be the odd occurrence over extended periods.

Tropical storms are a type of cyclone that carry sustained winds - that is, the average wind speed in one minute - of between 60 and 120 kilometres per hour. The next step up, hurricane category, exceeds 120km/h.

Subtropical storms are hybrids that have the characteristics of the occurrences of the tropical system, but which occur at mid-latitudes.