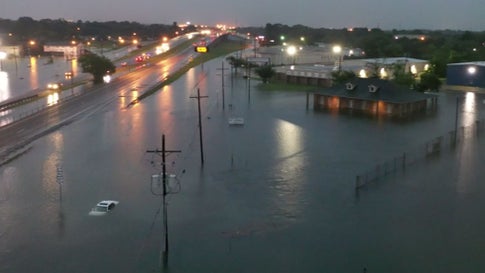 Tropical Depression "Imelda" formed on September 17 and strengthened into a tropical storm just before making landfall near Freeport, Texas. The storm continues to unleash life-threatening floods in the southeast part of the state, particularly in the Houston suburbs and Beaumont area on September 19. A tornado also wreaked havoc in Bayton on the same date.

The storm has been declared the 5th wettest tropical cyclone for the contiguous US. Several areas outside Houston has faced more than 254 mm (10 inches) of rain since September 17. Beaumont received 305 mm to 508 mm (12 inches to 20 inches) of rain, while Jefferson County has received more than 762 mm (30 inches).

Floods started hitting neighborhoods in the Beaumont area, trapping people including physically disabled elderlies. Reports said that the situation in the place is turning worse by the minute.

The National Weather Service warned residents of Montgomery, Liberty, Chambers counties, and northeastern Harris County of flash flooding risks, asking people to stay indoors. "Do not venture on to any roads in these areas," said the warning.

Over 64 000 residential and commercial properties experienced power outages as of 10:30 LT, while more than 1 000 residents called for rescue.

A rain gauge in Jefferson County, Texas, has recorded a total of 33.6 inches of rain from Imelda. Over 1,000 people have requested to be rescued in the area: https://t.co/pnJZJFgg1Y pic.twitter.com/pIl1swbgoE

Floodwaters also struck the Winnie community between Houston and Beaumont. Motorists and commercial buildings in the flood-stricken area have been suffering ever since.

A photo on social media showed a truck trapped in the waters. According to reports, the truck driver was supposed to be heading back to Houston.

Sheriff Brian Hawthorne reported that at least 200 homes were hit by floods in CHambers County that rescue operations team had to use an airboat to reach victims.

The Beaumont Police Department also said that they received over 250 calls for rescues and 270 evacuation requests.

The violent rains not only caused flash floodings but also produced a tornado, which was spotted in Baytown. The city was about 41.8 km (26 miles) east of Houston.

According to locals, the twister blew a propane tank away which landed into a house. The tornado lasted about three minutes.

These are current conditions in Aldine and Kingwood areas. Please be safe, several motorists are stranded. #HouNews #HouWx pic.twitter.com/X3d7Y5iJNZ