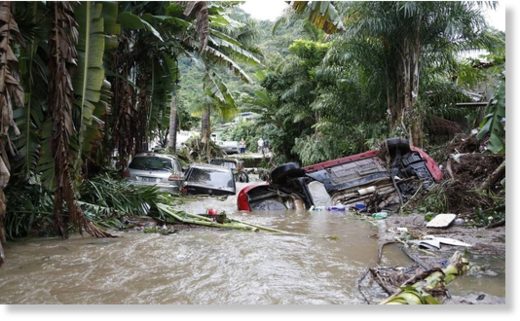 Heavy rain from 29 February triggered flooding and landslides in the state of Rio de Janeiro, Brazil, causing widespread damage and at least 3 deaths, according to local media.

Some areas recorded more than 180mm of rain from late 29 February to early 02 March. A weather station in Mendanha recorded 61.4mm of rain in 1 hour late on 29 February, with 17.6mm falling in 15 minutes.

The rain triggered flooding and landslides causing severe damage in the Metropolitan Region of Rio, particularly western areas, and also in the Baixada Fluminense region of the state.

Dozens of roads were flooded, cars swept away and houses damaged. Two people were injured when a house collapsed in Magé, in Baixada Fluminense. Rio Metroplitan Civil Defense responded to 161 calls in total, many of them for collapsed or damaged buildings.

Local media said the Fire Department has confirmed at least 3 fatalities, two in Zona Oeste (West Zone) and one in Baixada Fluminense. There are unconfirmed reports of a fourth fatality in the Acari neighbourhood.

The severe weather in Rio de Janeiro follows a series of flood events in south-eastern Brazil throughout January and February 2020 in the states of Espírito Santo, Minas Gerais and São Paulo. Belo Horizonte saw its rainiest February in 16 years.