“We haven’t stopped shaking. It’s the first time something like this happens,” said the emergency management director for the southern coastal town of Ponce.

The most recent quake occurred eight miles south of Guayanilla at a shallow depth of four miles and was felt in the capital of San Juan and elsewhere in Puerto Rico. It was reported by more than 320 people on the USGS website. 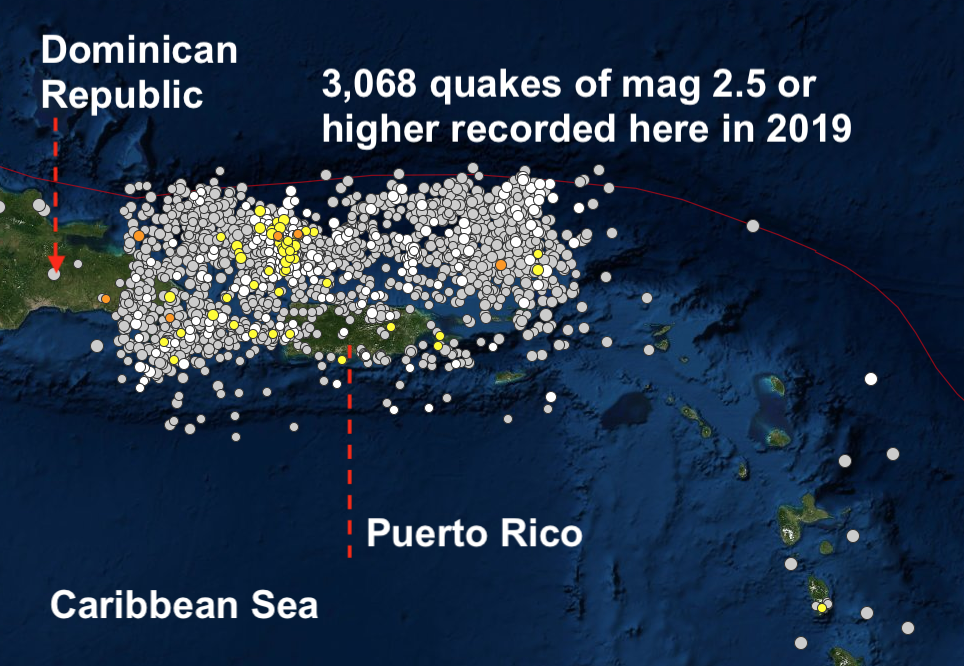 The quake swarm began on December 28, with a M4.7 followed by a M5.1 tremor that hit near Puerto Rico’s south coast and sent dozens of panicked people into the streets.

These first two jolts made goods fall off supermarket shelves, created cracks in homes, and triggered a large rock to fall and block a road. No injuries were reported.

Meanwhile, more than 1,100 earthquakes have been recorded in that region. Most have not been felt, except for a M4.2 on December 31 and that of yesterday.

“I’ve spent 29 years with Puerto Rico’s Seismic Network, and it’s the first time I observe this kind of activity,” director Víctor Huérfano told The Associated Press. “There’s no way to predict when it’s going to end, or if it’s going to lead to a major event.“

“In general, the force behind all of this is the North American plate and the Caribbean plate squeezing Puerto Rico,” he said.

The series of quake has been very shallow and have occurred along three faults: Lajas Valley, Montalva Point and the Guayanilla Canyon.

Back in 1918, a deadly tsunami was created by a strong and shallow M7.3 earthquake that killed at least 116 people on the island.

Earthquakes in the Caribbean

The M6.0 earthquake that occurred near Puerto Rico on September 24, 2019, was the largest earthquake to strike the U.S. territory in five years.

It was not, however, the largest recorded earthquake there. That distinction goes to the July 7, 1943, M7.7 earthquake that thankfully did not generate a tsunami.

Other earthquakes, and sometimes the landslides they cause, have produced tsunamis throughout the Caribbean Sea region, including one in Puerto Rico in 1918.

Therefore the following animation begins in 1918 and covers the 101 years up until the present day to show all of the recorded seismic activity in this region over that time period.

Tectonic and seismic of the Caribbean

The Caribbean Sea lies over the Caribbean Plate, a section of the earth’s crust bounded by active faults separating it from other tectonic plates.

These other plates include the North American Plate to the north and east and the Pacific Plate to the west. Relative motions between these plates cause earthquakes at their boundaries.

Most of the east-west trending boundaries are “strike-slip” or transform faults such that the plates move past each other horizontally, similar to the famous San Andreas Fault in California.

Since they move sideways they do not generally cause earthquakes that move the ocean water above them, though they can trigger landslides that generate tsunamis, such as in Haiti in 2010.

But the boundaries of the Caribbean Plate that run northwest-southeast in Central America and the Leeward Islands are subduction zones, a type of plate boundary that can produce megathrust earthquakes with large vertical motions that can cause devastating tsunamis, such as the pair of devastating Dominican Republic earthquakes in 1946.

Some earthquakes in this region that produced significant tsunamis include: