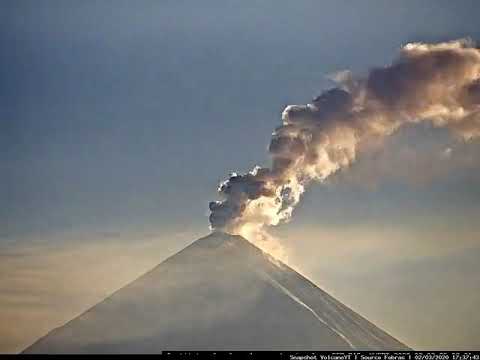 Russia's highest volcano, Klyuchevskoy, has erupted, sending ash and steam in a volcanic cloud up to 20,000 feet into the air.

On Monday, a report from the Kamchatka Volcanic Eruption Response Team (KVERT) said a "moderate explosive eruption" of Klyuchevskoy was ongoing, and that explosions of ash between 16,400 and 23,000 feet "could occur at any time."

The aviation code of the volcano, which informs of the risk posed to aircraft, was listed as orange, the second highest warning level. An orange code means the ash cloud produced by the eruption has the potential to impact flights. If volcanic ash gets into an aircraft it can lead to the failure of navigation instruments and engines. "Ash particles sucked into an engine can melt quickly and accumulate as re-solidified deposits in cooler parts, degrading engine performance even to the point of in-flight compressor stall and loss of thrust power," the United States Geological Survey (USGS) notes.

According to the KVERT report, the height of the volcanic cloud had reached between 18040 and 19680 feet. The cloud had traveled nine miles and was drifting westwards.

According to Russia's RIA Novosti, no ash had been reported in settlements in the region. However, it said Kozyrevsk village is on the path of the plume, so may encounter ash fall as a result of the eruption.

Klyuchevskoy is the highest active volcano in Eurasia, at an elevation of 15,580 feet. It is a stratovolcano with a cone shape and crater that is almost 2,300 feet wide. It is thought to be around 7,000 years old and is part of the Klyuchevskaya group on the Kamchatka Peninsula in eastern Russia.

The Klyuchevskaya group consists of 160 volcanoes, 29 of which are still active. Other volcanoes in the group that are currently classified as erupting or restless are Sheveluch, Ebeko and Bezymianny.

Bolshaya Udina, which sits at the center of the Klyuchevskaya group, also raised concerns last year after researchers said the volcano, which was considered extinct until 2017, could produce an eruption as large Vesuvius in 79 A.D. In a study published in the Journal of Volcanology and Geothermal Research, researchers found seismic activity in the area around Udina, concluding it was the result of magma intrusions beneath the volcano.

Lead author Ivan Kulakov told the newspaper Science in Siberia that when a volcano has been quiet for a prolonged period, its first eruption can be "catastrophic."

"A large amount of ash is thrown into the air, it is carried far away, and not only the surrounding settlements, but also large territories all over the planet can suffer," he said. "Recall Pompeii: the awakening of Vesuvius was preceded by a lull for several thousand years. And the eruption in Peru in 1600 led to a cooling in Europe and famine in Russia."