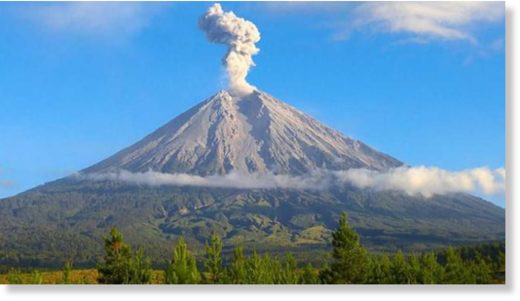 Mount Semeru in Lumajang, East Java, has reportedly shown elevated volcanic activity that was marked with a 300-second tectonic earthquake and a 2,000-meter-high column of ash blowing south.

The increasing activity was recorded on Friday morning at around 6 a.m., the Volcanology and Geological Hazard Mitigation Center (PVMBG) confirmed, citing that the mountain had persistently erupted and expelled lava from its crater since the beginning of April.

"For now, the volcano will potentially expel lava and hot ash in the direction of the Besuk Bang, Besuk Kobokan and Besuk Kembar deltas," the PVMBG staff member in charge of monitoring Mount Semeru, Kristyanto, said as reported by kompas.com.

Authorities, however, still maintained caution in the alert status for the volcano, which is the second-highest level, despite the increasing activity.

A top official at the Lumajang Disaster Mitigation Agency, Wawan Hadi, separately called on local residents not to panic yet remain alert.