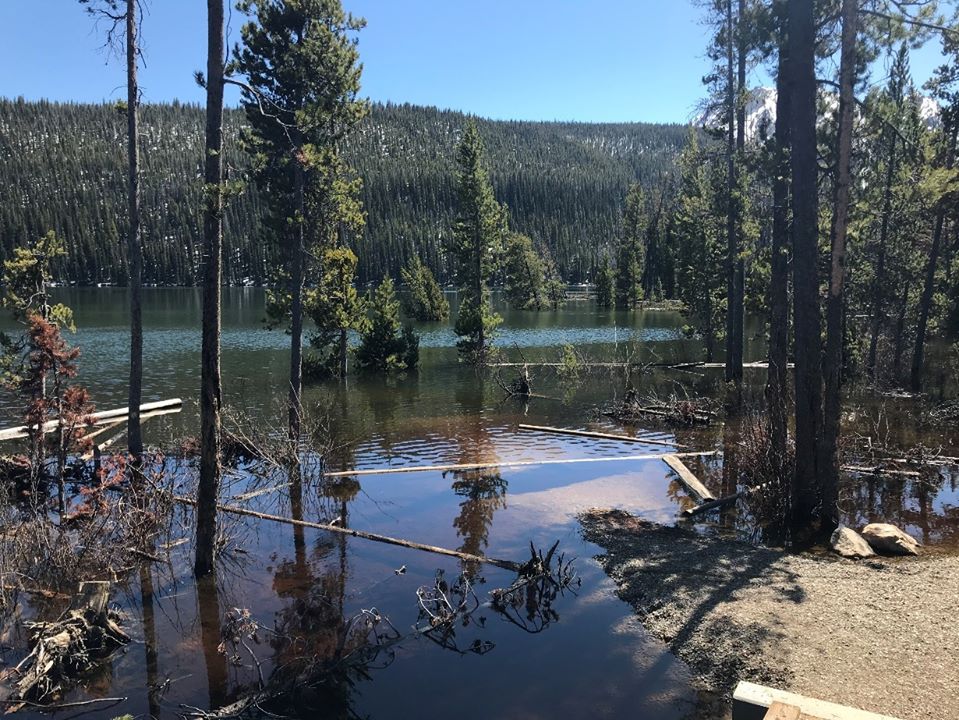 With the melting of winter snowpack and ice at lakes in the Sawtooth National Recreation Area, several observers noted something was different at the Stanley Lake inlet.

Initial reports noted that this former boat launch, beach, and popular fishing area was flooded with deep water and had seemingly disappeared.

Yep, according to new investigations, geologists believe that the Stanley Lake inlet beach collapsed as a result of the March 31 M6.5 earthquake.

The Idaho Geological Survey reviewed photos and pre- and post-earthquake satellite imagery of the inlet and linked the flooding with geologic processes associated with the powerful Idaho earthquake.

“The most probable cause for the “disappearing” of the inlet delta is a combination of liquefaction and compaction of saturated sediments and some possible sliding and lateral spreading on the delta toward the deeper part of the lake as a result of the March 31 earthquake or the associated aftershocks,” said Claudio Berti, Director and State Geologist, Idaho Geological Survey.

The Sawtooth National Recreation Area recently redesigned the recreation facilities at Stanley Lake. In 2019, a newly constructed boat ramp replaced the inlet delta for boats accessing the lake. Aging campground infrastructure was removed from the shoreline near the inlet and replaced with a new Stanley Lake Campground at the east side of the lake. The inlet beach remained accessible with a trail and boardwalk for recreationist and anglers.

“The loss of the inlet beach for fishing and recreation is unfortunate because that area was so popular with visitors at the lake, fortunately, the new boat ramp and campground construction were completed before this event, ensuring access for boaters and campers going forward,” said Brian Anderson, Deputy Area Ranger for the Sawtooth National Recreation Area.

Geologists will further investigate the site to collect data that would better describe this event and the overall geological characterization of the March 31 earthquake and aftershocks.