More than 500 earthquakes rattle western Nevada in one week 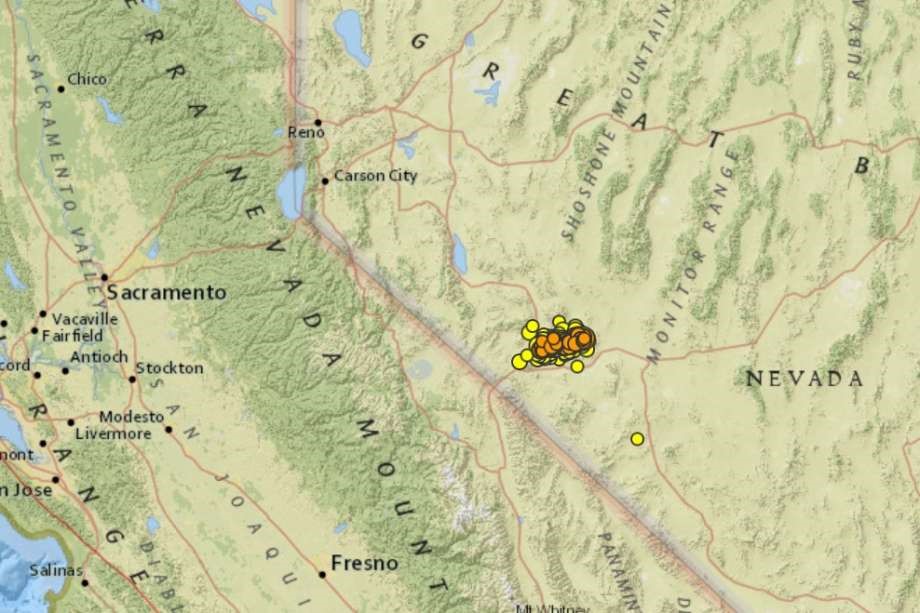 The ground has come alive in a pocket of western Nevada.

A magnitude-6.5 earthquake rocked a remote region 35 miles west of Tonopah on May 15 and hundreds of aftershocks have followed — an event this corner of the county hasn't seen in over half a century.

The initial big quake struck at 4:03 a.m. last Friday east of the Sierra Nevada, roughly halfway between Reno and Las Vegas, according to the U.S. Geological Survey. It was the largest to hit Nevada in 66 years and caused cracking along US 95 in Esmeralda County and broke some windows in Tonopah but, because this area is mostly unpopulated, damage was minimal.

A dozen aftershocks of 4.5 and above — and 500 quakes of 2.5 and above — have been recorded near Tonopah since the 6.5 quake. As recently as Wednesday morning, a 5.0 temblor struck.

"This is your classic shock-aftershock sequence," said Dr. Graham Kent, director of the Nevada Seismological Laboratory. "This is similar to what you’d expect in the aftermath of the big quake."

The 6.5 quake and following aftershocks occurred in the Walker Lane Seismic Region, a fault zone that roughly aligns with the Nevada-California border from Death Valley to Pyramid Lake.

Across time, Nevada has had an abundance of earthquakes and is considered the third most actively seismic state. The largest earthquake in state history was a magnitude 7.3 in 1915 and the next biggest was a 7.1 in 1932. In 1954 alone, the state saw five earthquakes of magnitude 6.5 or greater.

"And then it just went cold for 66 years," Kent said. "We would tell people it's all going to end and now it has. We knew sooner or later it would break and it broke in an area that's not that populated."

The western United States as a whole has generally been seismically quiet since the 1990s but Kent said this is changing. He pointed to a 5.7 near Salt Lake City and a 6.5 in Idaho in March, as well as several earthquakes in the 5.0 range near Mono Lake in California.

The increase in seismic activity is an important reminder for people living in more populated areas of the West such as the Bay Area, and Kent emphasizes that earthquakes can happen at any time, even during a pandemic.

"People get too wrapped around the axle about a single hazard," he said. "Mother Nature doesn't wait for the pandemic to end."