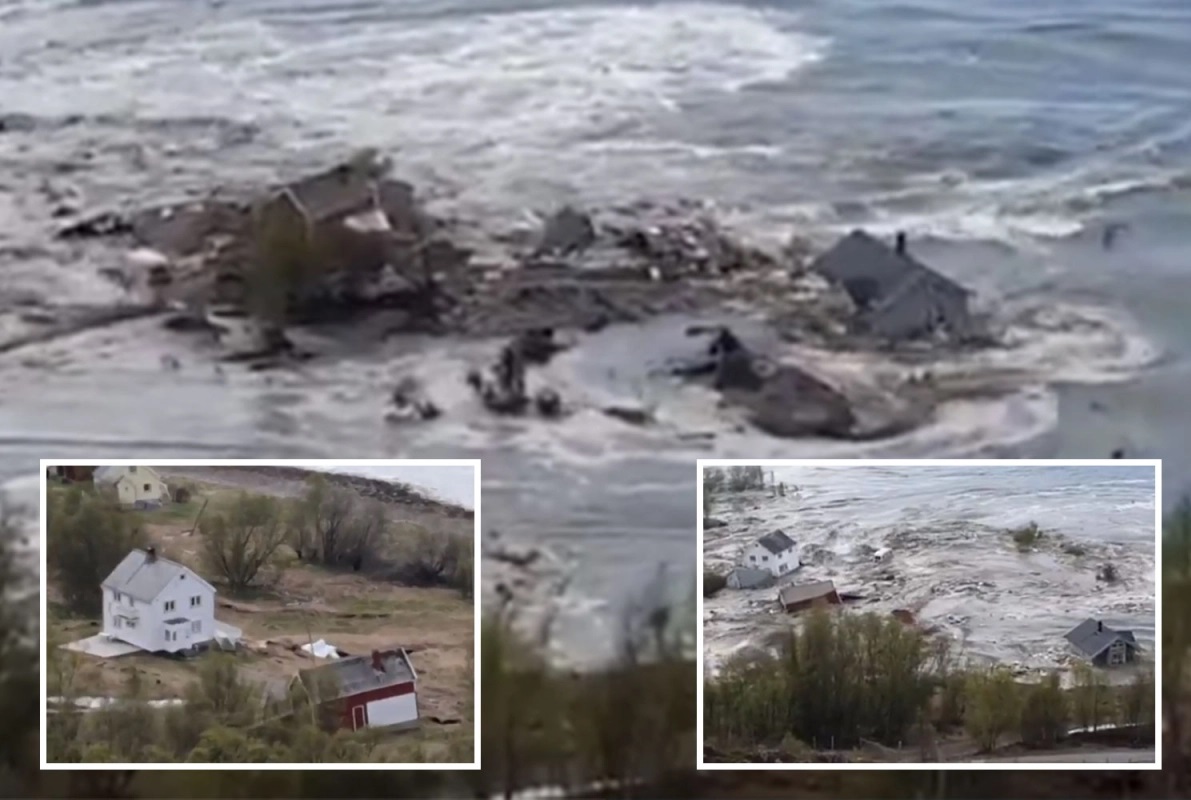 Bjordal was called to the scene at 14:00 UTC (16:00 LT) to assist the police and rescue team. Among the houses destroyed were four cabins used as holiday homes.

A dog had also been swept away into the sea but was eventually rescued by a helicopter from the 330th Squadron.

One resident named Jan Egil Bakkeby, who was able to film the terrifying event, said he and his wife noticed a crack in the downslope from his home Tuesday, June 2, prior to rainy conditions.

"We saw a large and deep crack in the road below the cabin. We were a bit skeptical, but still chose to stay overnight."

"At first I thought there was someone in the loft, but then I saw out of the window that the power cord was smoking and then I saw that it was raining."

"I stormed out and fled up the mountainside where I saw it all from a distance," he continued. "You could say I ran for my life."

"We thought maybe the road would crash, but not that the whole cabin would go."

The homes were situated on clay soil, which becomes weak in wet conditions.

Mudslides of this scale "seldom happen in Norway, maybe every one or two years," said Bjordal. "Here in Alta, there has never been a slide that big,"

Officials will be monitoring the land for further movement over the following days, as well as the sea and seabed level. Next week, officials will take soil measurements, he added.

The far end of the cape where the landslide took place was closed off Thursday, June 4. "The extent of the damage is considerable, and there's a lot of debris," said Alta mayor Monica Nielsen.

Work is underway to make sure the rubble does not end up in shipping lanes.

Dr. Dave Petley of The Landslide Blog stated that footage of the landslide confirmed that a substantial failure occurred before the main Alta clay landslide.

"There is a large vacated scar in the background, whilst in the foreground, slumping has developed," he wrote.

"First, further failures have developed even after the viral video was captured. In particular, the landslide has developed laterally, so that a larger portion of the coast has now been affected"

Petley also noted that the footage captured a small retrogressive landslide in the rear scarp of the mudslide. "Notable here is the highly mobile nature of the failed material," he continued.

The material was sufficiently strong to stand in an almost-vertical scarp, but once failed, flows like a fluid. "This is a good illustration of the very challenging geotechnical properties of quick clay."

The caption on the uploaded footage says that NVE has reported a minor landslide in this area on May 29, a few days before the major landslide.

NVE has warned of the possibility of more landslides in the country. "It’s important to stress that there’s still a lot of snow in the mountains," said NVE hydrologist Bjorn Sonju-Moltzau on Thursday.

"We’ve only gotten rid of around half of it. That means we still have the rest of it in the central and northern parts of the country."

Meteorologists forecast a lot of rain in the southern region, heightening the risk of mudslides.