Signs of thermal unrest and magma intrusion at Yellowstone Steamboat Geyser in Wyoming is the world's tallest active geyser, which sometimes blasts water over 90 m (300 feet) into the air. At times, the geyser stays quiet for years then abruptly bursts back to life-- a behavior that has been puzzling scientists. A new study, along with an analysis by volcanologist Erik Klemetti, delves into this restless behavior to understand what prompts deformation around the caldera and how it might be connected to Steamboat Geyser.

Yellowstone caldera is a supervolcano that covers over 1 500 square km (580 square miles) in the state's northwest corner. As described by Charles Wicks from the USGS, "Yellowstone's roots seem to extend all the way to the core-mantle boundary. In that dimension, it’s a magmatic system of continental scale."

The caldera has geothermal features such as geysers, hot springs, mud pots, and geothermal pools. This hydrothermal activity is propelled by the massive reservoirs of heat beneath the Yellowstone area, most of which comes from the magma found deep underneath the caldera.

According to Klemetti, also an associate professor of Geosciences at the Denison University in Ohio,  the heat and water mean the land surface often ascends and descends, indicating that Yellowstone is best described as a restless caldera.

A new period of activity beginning 2018 has provided new insights into the causes of surface deformation around the caldera-- a subject that has been debated since its discovery more than four decades ago. 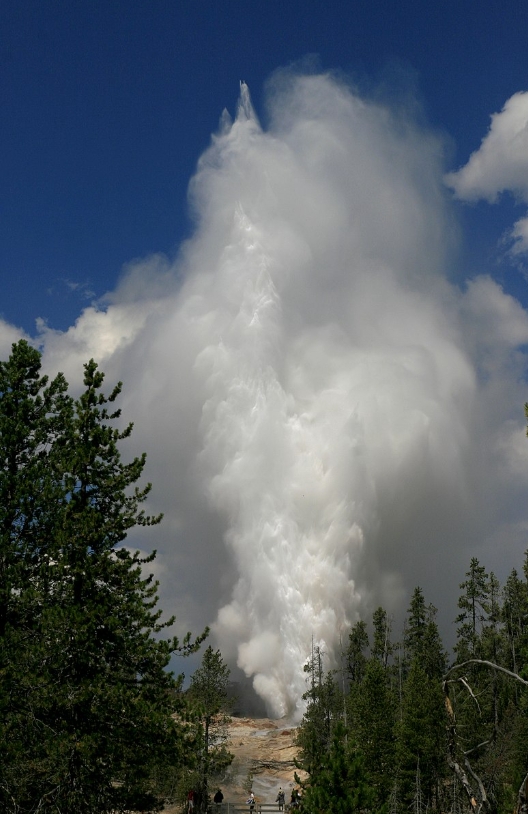 "It turns out that the rising and falling of the land, the behavior of some geysers, and the introduction of new magma underneath Yellowstone could all be linked," Klemetti remarked.

For decades, the north rim area and caldera floor have been deforming. The team looked at the North Rim Uplift Anomaly (NRUA) and used deformation data from new techniques to model potential sources of the changes.

"Magma, volatiles released from magma, or hydrothermal fluids could all cause the surface to rise or fall," said Klemetti.

The team used data from 2000 to 2018 to stud how much the NURA either inflated or deflated. The findings showed that the deformation in the NRUA may represent the magmatic volatiles accumulation from a basaltic intrusion around 2000.

Mike Poland, scientist-in-charge of the USGS Yellowstone Volcano Observatory who was not part of the study, believes the connection may be more complex. "Why would just a single geyser respond to processes beneath Norris [Geyser Basin]? Wouldn’t that impact all the geysers?"

One explanation might be that Steamboat Geyser possibly has a more complex and deeper system than other geysers at Yellowstone.

"With only two episodes of observed deformation near Norris, the eruption frequency appears to respond to the surface deformation. Of course, that’s a very small sample size, so the apparent connection might be happenstance," said Wicks, noting that scientists have limited data set for Steamboat Geyser so far.

Any link between Steamboat Geyser's activity and gas accumulation near the surface could increase the risk of hydrothermal explosions.

"Continuous monitoring of volatile flux rates are really needed to put the geophysical models in context," Wicks stated, suggesting that the ability to have constant geochemical monitoring of the hydrothermal fluids would help scientists make more precise models.

"If surface inflation is caused by the accumulation of pressurized fluids and deflation occurs when those fluids escape to the surface, we might be able to detect changes in volatile flux over time," he added.

"The ability to link deeper processes like magmatic intrusion with surface phenomena is tantalizing for geoscientists monitoring an active caldera like Yellowstone," Klemetti also pointed out.

To Wicks and Poland, studying the connection between magmatic and hydrothermal systems at Yellowstone is also important for making better hazard models.

Two recent uplift episodes, from 2013–2014 and 2016 to present, at Norris Geyser Basin in Yellowstone National Park appear to be related to a magma intrusion event during 1996–2001. The uplift probably results from fluids that have been expelled from the intruded magma. The expelled fluids have accumulated at a shallow depth (most likely 2–3 km), and the record number of eruptions of Steamboat Geyser since March 2018 are probably related to the resulting uplift. The shallow nature of the magma‐derived fluid accumulation may represent an increased risk of hydrothermal explosions at and around Norris Geyser Basin.