An intense earthquake swarm started near Salton Sea, California on September 30, 2020, with 421 earthquakes detected by 07:00 UTC on October 1.

"This earthquake [M4.9] and the associated swarm are located in an area of diffuse seismic activity between the San Andreas fault in the north and the Imperial fault to the south," USGS seismologists said in a statement.

"This area has also seen swarms in the past – notably the 1981 Westmorland swarm, which included a M5.8 earthquake, and the 2012 Brawley swarm, which included a M5.4 earthquake. Past swarms in this region have remained active for 1 to 20 days, with an average duration of about a week. The current swarm is occurring about 40 kilometers (25 miles) to the south of the swarm that occurred near Bombay Beach in August 2020." 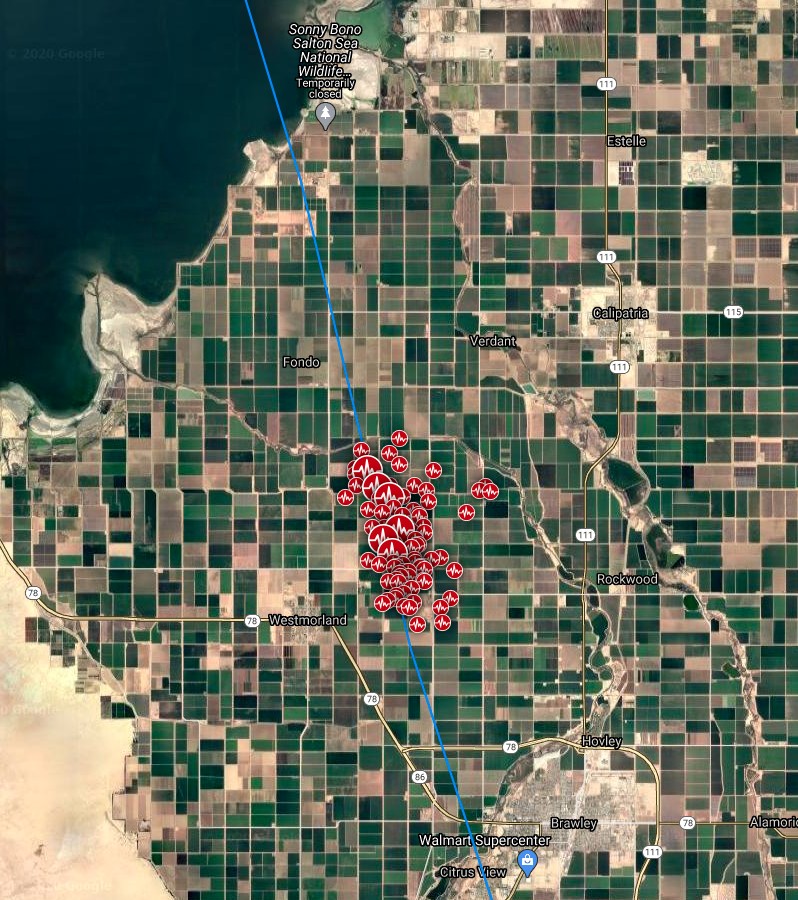 According to the USGS, there is approximately a 3 in 10 000 chance of a magnitude 7+ earthquake in the vicinity of this swarm in a typical week.

"[This is] one of the largest swarms we have had in the Imperial Valley," seismologist Dr. Lucy Jones said.

"None of the earthquakes that have been happening in the Imperial Valley are anywhere near the San Andreas fault," Jones added.

"They are in the Brawley Seismic Zone – a network of small faults that connect the San Andreas and Imperial faults. Historically largest Brawley event was M5.8."

The following three scenarios describe the possibilities of what could happen from September 30 to October 6, according to the USGS forecast released on September 30.

Only one of these scenarios will occur within the next week, USGS said.

These scenarios include the possibility of earthquakes on and off the Imperial and San Andreas Faults.

1. Scenario 1 (most likely): Earthquakes continue, possibly including earthquakes up to magnitude 5.4.

The most likely scenario is that the rate of earthquakes in the swarm will decrease over the next 7 days. Some additional moderately sized earthquakes (M4.5 to 5.4) may occur, which could cause localized damage, particularly in weak structures. Smaller magnitude earthquakes (M3.0+) may be felt by people close to the epicenters.

A less likely scenario is a somewhat larger earthquake could occur (up to M6.9). Earthquakes of this size could cause damage around the area close to the earthquakes that have already occurred and would be followed by aftershocks that would increase the number of smaller earthquakes per day. This scenario occurred in a previous swarm in the area – in 1981, when a swarm in this region included a magnitude 5.8 earthquake.

3. Scenario 3 (least likely): A much larger earthquake (magnitude 7 or higher) could occur within the next 7 days.

A much less likely scenario, compared with the previous two scenarios, is that the ongoing swarm could trigger an earthquake significantly larger than the M4.9 that occurred on September 30 (i.e., M7.0 and above). While this is a very small probability, if such an earthquake were to occur, it would have serious impacts on communities nearby and would be followed by aftershocks that would increase the number of smaller earthquakes per day.