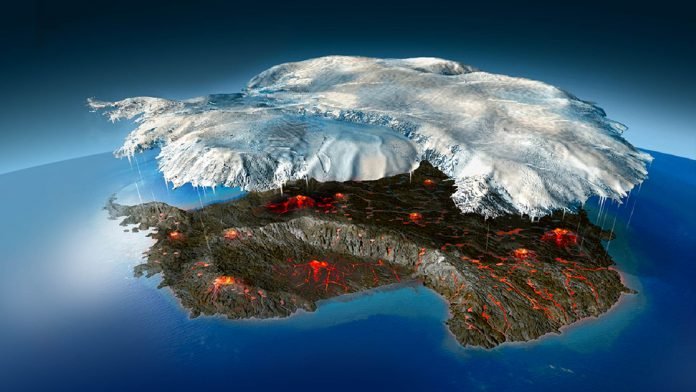 The icy continent is home to some 5,000 scientists around the world who study the unspoilt region to learn more about the Earth’s history and the effects of climate change.

But researchers got a shock when they discovered more than 100 dormant volcanoes below the continent’s ice sheet, making it the largest volcanic region on Earth. 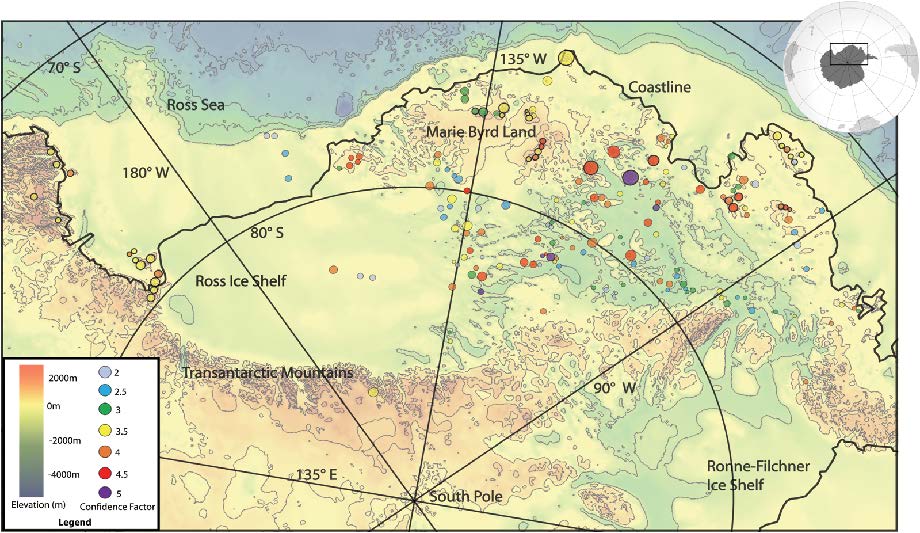 The find was particularly important because the activity of these volcanoes could have crucial implications for the rest of the planet.

If one erupts, it could further destabilise some of the region’s ice sheets, which have already been affected by Earth changes.

John Smellie, Professor of Volcanology at the University of Leicester, told The Conversation: “The volcanoes would melt huge caverns in the base of the ice and create enormous quantities of meltwater.

“Because the West Antarctic Ice Sheet is wet rather than frozen to its bed – imagine an ice cube on a kitchen worktop – the meltwater would act as a lubricant and could cause the overlying ice to slip and move more rapidly.

“These volcanoes can also stabilise the ice, however, as they give it something to grip onto – imagine that same ice cube snagging onto a lump-shaped object.

“In any case, the volume of water that would be generated by even a large volcano is a pinprick compared with the volume of overlying ice.

“So a single eruption won’t have much effect on the ice flow. What would make a big difference, is if several volcanoes erupt close to or beneath any of West Antarctica’s prominent ‘ice streams’.”

More than 80 percent of Earth’s freshwater reserves are stored in Antarctica – enough to raise global sea levels by about 60 meters if it melted – make the planet “uninhabitable” – as scientists have previously pointed out.

And Prof Smellie said an eruption beneath the ice could trigger a catastrophic speeding up of this process.

He added: “Ice streams are rivers of ice that flow much faster than their surroundings.

“They are the zones along which most of the ice in Antarctica is delivered to the ocean, and therefore fluctuations in their speed can affect the sea level.

“If the additional ‘lubricant’ provided by multiple volcanic eruptions was channelled beneath ice streams, the subsequent rapid flow may dump unusual amounts of West Antarctica’s thick interior ice into the ocean, causing sea levels to rise.

“Something similar might have occurred about 2,000 years ago with a small volcano in the Hudson Mountains that lie underneath the West Antarctica Ice Sheet – if it erupted again today it could cause the nearby Pine Island Glacier to speed up.”

And Prof Smellie said it could have a knock-on effect.

He added in 2017: “Most dramatically of all, a large series of eruptions could destabilise many more subglacial volcanoes.

“As volcanoes cool and crystallise, their magma chambers become pressurised and all that prevents the volcanic gases from escaping violently in an eruption is the weight of overlying rock or, in this case, several kilometres of ice.

“As that ice becomes much thinner, the pressure reduction may trigger eruptions.

But for now, these volcanoes are dormant, meaning they have not erupted in the past 10,000 years, but could do so in the future. Look at Mount Erebus and Deception Island. The latter was recently hit by a powerful swarm of earthquakes