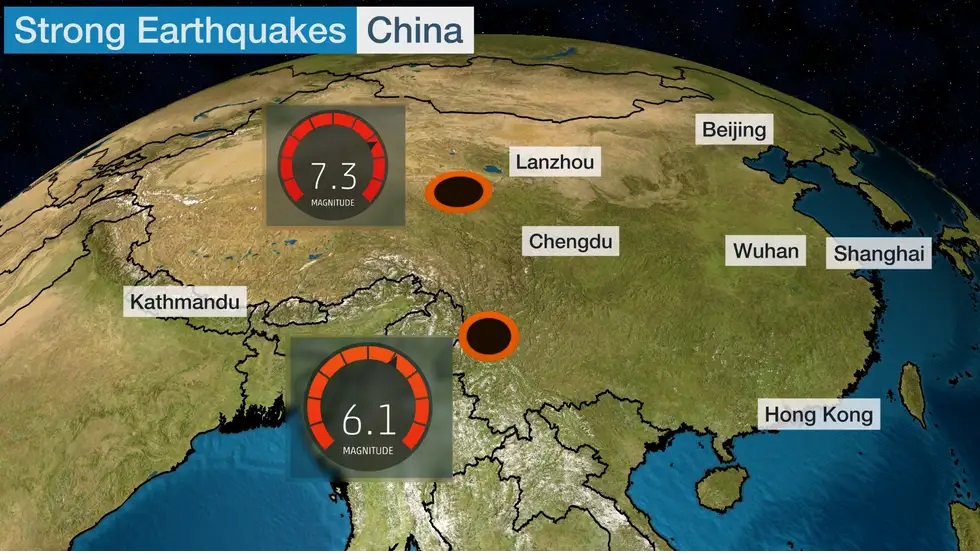 The first one, rated magnitude 6.1 by the U.S. Geological Survey, hit in the southwestern part of the country near the city of Dali in Yunnan province on Friday night local time.

Chinese news reports said strong shaking was felt but showed very little damage, according to the Associated Press; One person was reportedly killed.

The second earthquake hit about four hours later, roughly 1,000 miles to the north in Qinghai. The USGS gave it a preliminary rating of 7.3 magnitude.

At least 10 aftershocks have rattled the region following the main quake with magnitudes ranging from M3.3 to M4.5.

Citizens Fleeing into the Streets:

A little bit less than 5 hours before, a strong M6.1 earthquake hit the southwestern Chinese province of Yunnan at 21:48 (1348 GMT) near the city of Dali at a depth of 10 kilometres.

The China Earthquake Networks Center warned people to “stay away from buildings.”

The first quake was followed by a series of strong aftershocks with magnitude ranging from M3 to M5.1.

The twin earthquakes in China come just days after a G3 Geomagnetic storm warning was issued by the NOAA.

U.S. Preparing for a Cataclysmic Solar Super-Storm That Would Take Down the Grid