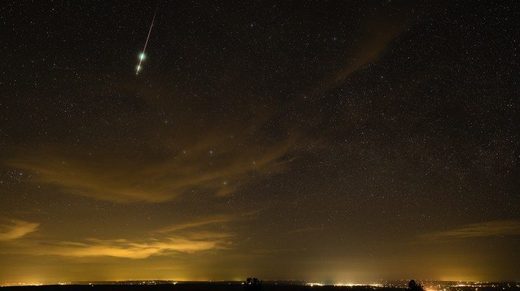 An amateur stargazer was lucky enough to spot the exact moment a fireball hit the sky, discharging a fantastic bright aura. Wade Earl from Oregon captured a meteorite explosion during the Lyrid meteor shower.

The image, taken on April 21, 2020, was sent to the IMO (the International Meteor Organization) and AMS (the American Meteor Society) displays the meteor seemingly shattering twice as it reaches the atmosphere, meaning that Earl captured a double bursting fireball. In the image, we can spot the "W" of Cassiopeia lying to the lower right of the fireball.

Various space objects, such as comets or asteroids, produce a bright explosion of fore when they reach the sky. Air flows into cracks and pores of the rock, dragging apart and causing it to burst. Fireballs, on the other hand, are meteors that might be brighter than anything else ever seen.

Meteorite Explosion Lit Up the Sky over Oregon

Due to their speed at which they touch the Earth's atmosphere, fragments bigger than one millimeter can produce a bright light as they streak through the sky. These bright meteors are also dubbed fireballs, and they sometimes strike awe or fear for those who spot them.

While the chances of a significant asteroid crashing on Earth are small, NASA thinks there is a one in 300,000 chance every year a cosmic feature that could bring environmental damage will hit. However, there are some projects on the go which could aid Earth against possible asteroid hits.

The space agency is now examining Asteroid Bennu, where its OSIRIS-Rex vehicle arrived back in 2018, for collecting more data. The asteroid has the potential to destroy a whole country on Earth, and according to scientists, it could crash our planet in 2135. Osiris-Rex's mission will provide important information on how to divert space objects from their impact course with Earth.