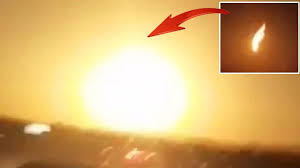 A bright fireball exploded over northern Turkey around 17:35 UTC (20:35 LT) on Wednesday evening, May 27, 2020. The American Meteor Society (AMS) received three reports, including from a witness in Tbilisi, Georgia.

Based on the AMS' trajectory, the fireball traveled in a west to east direction, from an area near Surmene town in Turkey to northwestern Azerbaijan.

"It was looking like an ordinary meteor but then it began burning [and] became really bright," said one witness in Kasutu, who described the object as orange in color.

Local media reported that the fireball was also seen in several provinces, including Artvin, Erzurum, Sivas, Tuncel, and Ardahan.

Observers took to social media to share videos of the fireball erupting into a bright flash of light before disappearing.

A meteorite was seen over the skies of Turkey at approx 20:30 local time! ☄🌠
pic.twitter.com/IFd4HQQpTB

Footage shows a supposed meteorite falling from the night sky, witnessed by people in northern Turkey.pic.twitter.com/Ps1LVsbEOO

"According to our first assessments, we think that it may have fallen into the sea," said Ozan Unsalan, associate professor at the Ege University's Department of Physics.

"I even asked the eyewitnesses, 'Was there a small shake?' Because this shaking of the ground is also expected, but it depends on the size and structure of the meteor. It can trigger a small earthquake."

Unsalan said they are in contact with NASA to evaluate footage of the event.