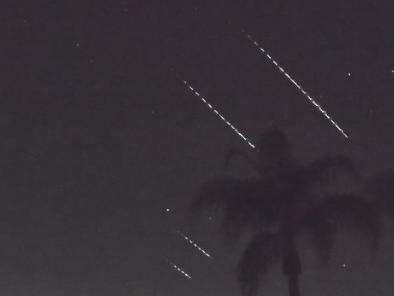 The American Meteor Society (AMS) camera system captured a swarm of 7 bright meteors of unknown origin within just 3 seconds of one another at 11:50 UTC on January 18, 2021.

Five of the seven meteor paths intersected in an area just east of the 3rd magnitude star Zubenelgenubi (alpha Librae), Robert Lunsford of the AMS said.

The radiant lists published by the IMO and the IAU MDC showed nothing matching any of the above-given positions.

"Calculating the positions of non-conventional sources such as the apex radiants revealed that the southern apex source lies close to pi Hydrae on this date," Lunsford said.

"This is not a source in the sense of a common orbit related to an object but rather a sum of meteoroids on similar near parabolic orbits with high inclination. This might explain the different radiant positions."

The close sequence of the observed meteors may suggest that the meteors are fragments of a meteoroid that recently fragmented prior to encountering the Earth, resulting in the swarm that was caught by these cameras, Lunsford concluded.