Bay Area residents took to Twitter Thursday night to report what sounded to some like a sonic boom.

Some said their houses shook. Others reported hearing an explosion-like noise or a loud boom. Some speculated that the sound may have been the result of a meteor.

One Twitter user said the phenomenon occurred around 7:20 p.m. Most of the reports appeared to be coming from residents of Santa Clara and Santa Cruz counties.

OK, unfortunately the time lapse makes it really hard to see on video, but I got some stills of what I think was a meteor that could be seen to the South from the Bay Area:@NWSBayArea https://t.co/Zn4SmDkZFT pic.twitter.com/ojY30Z60vO

The National Weather Service's Bay Area branch said it was aware of the social media reports, but did not see or hear anything unusual from its Monterey office. Thick clouds hanging over the office, however, would have obscured anything in the sky, NWS said.

Just heard a pretty big boom in San Jose. Shook the house. Was two booms together, reminded me of the space shuttle sonic boom.

UPDATE A METEOR which flew through the Californian skies in broad daylight left some locals wondering if the incoming space rock hit the Santa Cruz mountains.

Earlier today, a meteor flew through the skies of California. Tens of people in California saw the meteor, most of those around the San Francisco area. Witnesses flocked to the International Meteor Organisation (IMO) to report their sighting.

Some were concerned that it was going to make land surface - which it did not.

A person named Cole told the IMO: "It was extremely close looking compared to any other meteor-like object I've observed and was headed towards the direction of Briones Reservoir.

"Could've touched down not too far from my location but am unsure. Very visible fragmentation."

Daniel added: "It was headed toward Black Mountain technically in the Santa Cruz Mountains; I am quite curious if it impacted on the face of the mountains I can see or if it streaked over or burned up before impact."

Julia said: "It was a clear blue sky and the sun was still up.

"It had a trail as it streaked across and it looked like silver and blue fire. Then the fireball vanished." 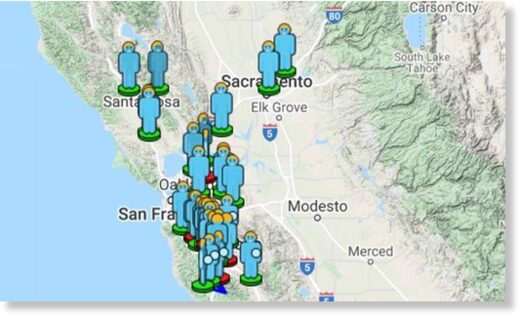 Ryan told the IMO: "I have seen quite a few meteors, this was the first I've ever seen during the day time.

"It was significant enough my peripheral vision caught it immediately while driving down a busy interstate."

Thankfully, the meteor did not make land and the explosion can be attributed to a small meteor hitting the atmosphere.