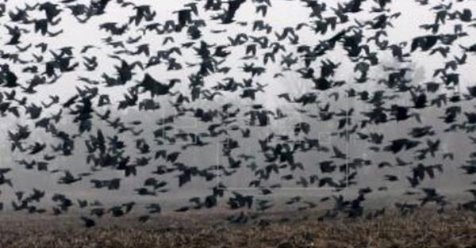 Someone from the online community provided a possible answer: “The crow is an eater of carrion. The elderly say that crows seem to anticipate death because they can smell it, even before a person dies. In other words, they can smell the odor of a dying person; but we humans cannot. They will then circle around this person waiting for him to die. That is why in Chinese culture crows are considered inauspicious and are always linked with death.”

Most of the videos, all filmed and posted online on January 28, 2020, show flocks of crows are from Yichang, Jingzhou, and Hanchuan, cities situated in Hubei Province, the epicenter of the Wuhan coronavirus.

In the Hanchuan City video, a large, dense flock of crows was videotaped flying around and cawing loudly. One observer said, “This situation has never occurred before.”

In a similar video from Yichang City, a man exclaimed, “Oh my God, it is said that abnormal scenes predict something unusual is about to happen.”

After those videos were viewed on the internet, netizens from other cities, including Jiaozuo and Puyang, in Hunan Province; and Beijing and Tianjin cities, wrote that they had observed similar phenomena recently.

A netizen from Beijing wrote: “I saw an even larger flock of crows in Beijing’s Haidian district last month. There were at least 1,000 crows.”

Meanwhile, a resident of Beijing noticed a large number of oversized mosquitoes clustered underneath a highway ramp in the city’s Haidian District on Jan. 25.

“This has never been seen before. It is very abnormal indeed. Can a research team in the related field come and examine it?” he asked.

Beijing is very cold in winter and adult mosquitoes, like the ones in the video, usually don’t emerge until April.

Ancient Chinese wisdom tells us that when there are a large number of overwintering mosquitoes or when they emerge in the early spring, they will likely bring about an outbreak of contagious diseases.

But the number of newly infected patients will reach maximum, about 200,000 per day, in April, while other cities like Chongqing, Guangzhou, and Shenzhen, will peak in May.