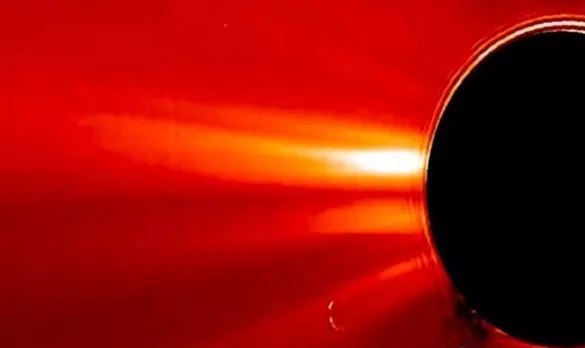 A PLANET-sized UFO hovered by the sun, before being hit by and surviving a massive solar explosion, according to analysis of NASA video from a self-described UFO ‘expert’.

The video was recorded by NASA’s Solar and Heliospheric Observatory. It appears to show a large stationary object near the sun being hit by a solar flare. However the object doesn’t appear to move or sustain any damage following the strike.

Speaking to International Business Times Scott Waring, a blogger specialising in UFOs, claimed only part of the mystery object is visible because of its orientation.

He believes this proves the sun is hollow and contains planets holding alien civilisations.

Mr Waring added that he had previously seen footage of an object five times the size of Earth leaving the sun.

Advocates of the ‘Hollow Sun’ conspiracy theory believe whole systems of planets are contained inside the sun, holding a wide range of alien life. 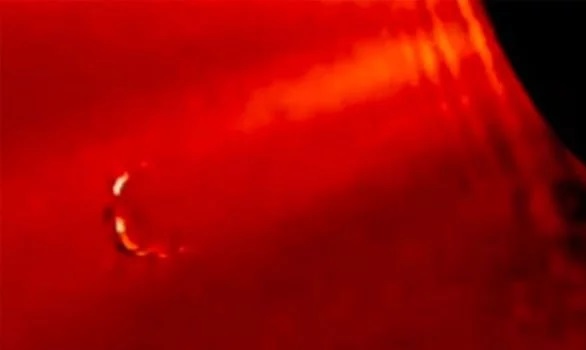 According to the theory these aliens enter and exit the sun via a giant door like device on its surface.

However these claims are widely regarded as nonsense within established scientific communities.

On his blog Mr Waring bizarrely argued the truth about UFOs is being covered up by the American government and NASA.

He wrote: “It’s amazing that so many videos of UFOs exist and yet the US government won’t take any of it seriously.

“Which means they are deliberate hiding the truth from the public.”

Respected scientists have yet to find proof that any advanced alien civilisations exist, but many believe they could be established somewhere in the universe.

Speaking on the Discovery Channel he warned: “If aliens ever visit us, I think the outcome would be much as when Christopher Columbus first landed in America, which didn’t turn out very well for Native Americans.”