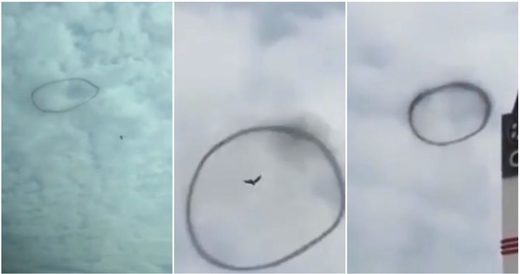 A mysterious black O-shaped cloud spotted over a city in Pakistan has prompted a torrent of unusual theories from residents and netizens alike, with some suggesting the odd sight is a harbinger of an alien invasion.

Seen floating over Lahore on Tuesday, the "evil cloud" - as some have taken to calling it - left onlookers perplexed, many of whom took to social media to try to get to the bottom of what they had just witnessed.\

They are here. #Lahore #Aliens pic.twitter.com/OfWPG20Il9

I think they are here to take back Gulbukhari now that her shrink has given up. pic.twitter.com/WXjoVyeWeP

They are here. #Lahore #Aliens pic.twitter.com/OfWPG20Il9

Others soon weighed in to note similar observations made elsewhere in the world, with one user sharing a clip taken in Dubai of the same phenomenon.

I noticed a similar thing some weeks ago in Dubai pic.twitter.com/qGl6xhgMtk

While some users thought they were missing out on an elaborate prank of some sort, such dark, ring-shaped clouds have been spotted all over the world. The explanation is more mundane than an extraterrestrial offensive or a portal to the netherworld, however, most likely caused by a small explosion or combustion. In one infamous case in the UK in 2014, dubbed the "Black Ring of Leamington Spa," the object was created by fireworks.