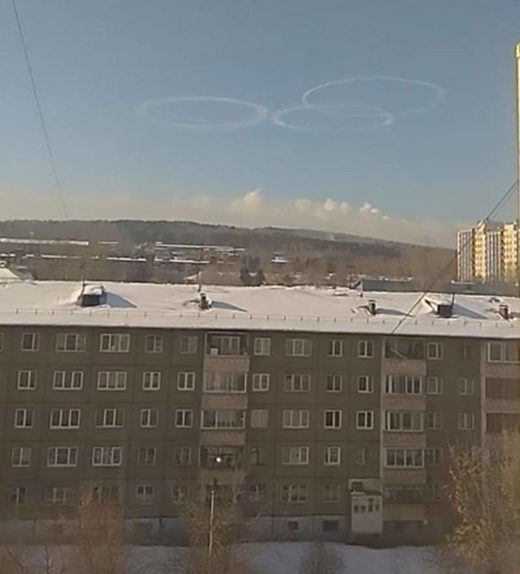 Bizarre footage of two mysterious large ring-shaped clouds appearing in the sky above a Russian city has baffled the internet.

Video has emerged showing the two disc-like clouds floating before a third suddenly becomes visible. Towards the end of the footage, a plane is seen heading towards the sky rings and pierces the first circle. Local media said a fourth ring appeared shortly afterwards.

The incident was filmed in the city of Irkutsk in the southern Russian region of Irkutsk Oblast by numerous local residents, and the images were later widely shared on social media.

The unusual phenomenon has raised discussions among web users over possible UFO sightings and even coronavirus scare.

Some suggested the circles could have been produced by a quadcopter or type of drone while others speculated that they could have been the result of secret test flights.

"I bet someone was having a cigarette and they blew huge smoke rings," one joked.

Another added: "Someone spreading coronavirus?"

Director of the Astronomical Observatory of the Irkutsk State University, Sergei Yazev, 61, said the circles in the sky were probably the inversion traces of a plane or aircraft. He added that the observatory had been contacted by local media enquiring whether the sky rings could be the result of a UFO.

Last week, a bizarre cube-shaped object was seen soaring across the sky over Colombia.

A Viva Air pilot captured the mysterious UFO as it glided down through the clouds in a controlled manner, at an angle.

Earlier this week, a glittering snake-like UFO, illuminated in red and gold, stalked the skies above São Paulo, Brazil, a city of 12million people.