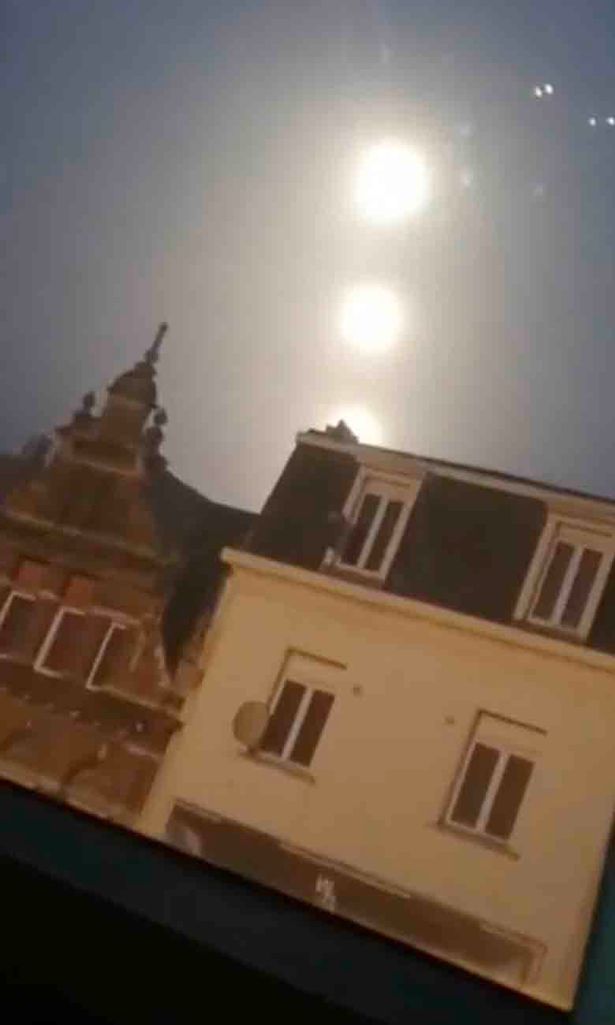 A bizarre video recorded by a witness has sent conspiracy theorists into a frenzy after three glowing orbs spotted moving in the sky.

Madison van't Zelfde, from Antwerp, Belgium, described the orbs the size of "giant moons" when it appeared outside her home in the neighbourhood of Schipperskwartier at around 7am on Wednesday, December 16.

The footage captures three bright orbs moving in a linear motion and a diagonal angle above buildings at dawn.

As the clip goes on, the mysterious white glowing hue lights up the surrounding area like spotlights.

The video ends when they move towards the left and disappear behind a building shortly.

Madison wrote: "The three orbs stayed in the same position in the sky (they almost looked like giant moons) for a short period of time, before moving, disappearing, and never returning.

"Note that the small lights in the upper right corner were a reflection of some Christmas lights that I have hanging up in my flat – those weren't part of it."

She added that the sun was not up at the time of filming.

The truth-seeker posted to Reddit asking for viewers' opinion and to her surprise, some shared a very similar experience in the comments.

One said: "This is almost exactly like something me, my two brothers and my mother seen outside her back window over 11 years ago.

"There were eight to nine glowing orbs slowly gliding through the sky with no ascent or descent and these orbs weren't blinding."

Another wrote: "This is wild! Almost looks like three suns moving across the sky."

But many more suggested it could be lights from a nearby tower crane.

Madison replied that she had checked the nearby area and found no large crane.

She explained: "This was definitely one of my first guesses, but I did notice some differences, such as the orbs being quite big, and the fact that they completely disappeared after less than a minute.

"I scouted out my entire area, including the site where I saw it happening, and found zero cranes in the vicinity that could explain it."