Millions of locusts have invaded the Italian island of Sardinia, seriously affecting farmers’ livestock and crop production in the worst insect invasion in more than 60 years.

The biblical plague has been described as the worst of its kind in six decades. Vegetation has been severely hit and the industry fears it may be too late to save this year’s crop.

Up to now, the locusts of the apocalypse have destroyed 2,500 hectares (6,200 acres) of agricultural land in the province of Nuoro, between the towns of Ottana and Orani.

Italian agricultural organization Coldiretti has pleaded for government assistance in fighting the plague. “We are walking on locust carpets,” Coldiretti said in a statement. The locust invasion has been linked to a recent rise in temperatures after months of cooler weather on the island.

“There are millions in the countryside,” the Italian farmers’ association Coldiretti warned in a statement on Monday.

“The locusts emerge on uncultivated land, but then they go to cultivated land to eat,” the group said, adding that there was little that could now be done to remedy the situation.

Coldiretti fears it may be too late for this year’s crop, but preventative measures should be put in place for next year.

“We had droughts in 2017 and a lot of rain in 2018, the ideal climate for locusts to emerge from fallow land and then move to cultivated fields to eat,” Michele Arbau from the lobby group said. “There is nothing we can do about it this year.“ 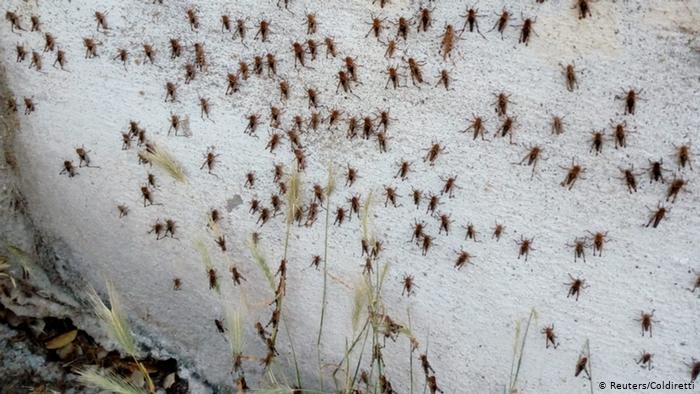 On the mainland, Northern Italy is also battling a plague of brown marmorated stink bugs, which are destroying swathes of fruit trees, Coldiretti added.

Locusts usually appear on the Mediterranean island of Sardinia in the summer months, between June and August. The invasion of the tropical grasshoppers has been described by experts as the worst in the region in 60 years.