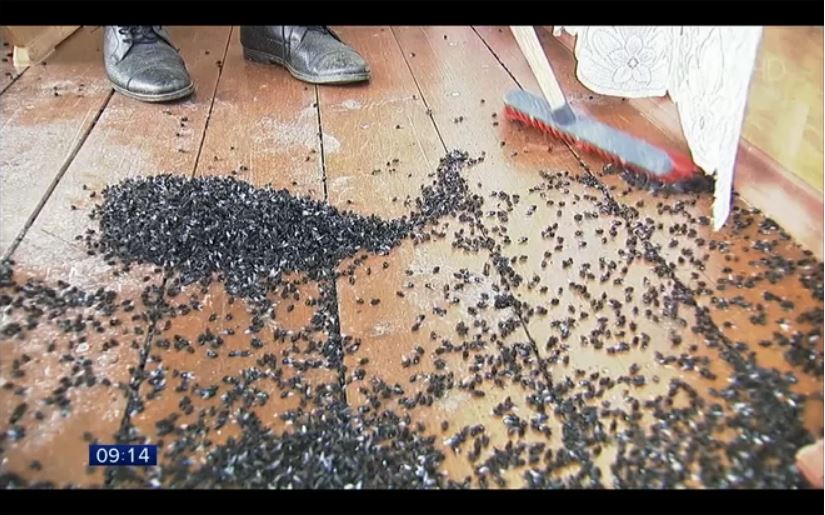 An apocalyptic footage recently released reveals unsettling views from the village of Lazorevy in Russia: Piles of dead and near-dead flies cover floors, tables and other surfaces in villagers’ homes. Meanwhile, outdoors, seething swarms of flies gather on roads, yards and fields.

In one terrifying scene, a reporter tosses a handful of soil into a crawling fly mass on a dirt path; he then cringes as a cloud of flies erupts into the air to form a buzzing tsunami of insect bodies.

One local resident, seen in the video sweeping up dead flies from the floor of his house, said that every day he would sweep up enough tiny corpses to fill at least half a bucket.

“It’s unbearable. The flies are everywhere,” said another resident.

Dense clouds of flies first appeared in Lazorevy weeks ago. Since then, villagers and local authorities have turned to pesticides to control the airborne invaders, but since flies breed so quickly, the toxic sprays provided only a brief respite from the insects before their numbers swelled yet again.

Suddenly acquiring millions upon millions of flying-insect neighbors is understandably horrifying, but it also carries a threat from the diseases that flies are known to carry. Villagers are also concerned that widespread and prolonged use of chemicals to kill the flies could harm human health.

Authorities have opened a criminal investigation to determine if illegal use of hazardous waste could have triggered the swarms.