Locust Plague Spreads, Darkening the Sky over the Middle East 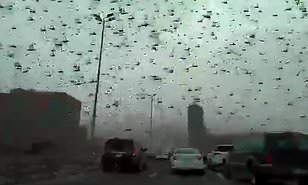 After East Africa, millions of locusts have now invaded Middle East countries like Yemen, Bahrain, Kuwait, Qatar and Saudi Arabia from the Horn of Africa.

People report biblical scenes as giant swarms of locusts are so thick they darken the sky.

The worst plague of locusts in 70 years is currently ravaging East Africa. In recent days, the insects spread to South Sudan, Uganda and Tanzania, after having devastated crops throughout Ethiopia, Kenya and Somalia.

The biblical plague has also engulfed Pakistan, India and is approaching the border to China, where thousands of starving ducks are waiting to eat them.

Meanwhile the Middle East countries report apocalyptic sceneries showing millions of insects darkening the sky as they invade Yemen, Bahrain, Kuwait, Qatar and Saudi Arabia from the Horn of Africa.

This shocking video below shows cars brought to standstill by a swarm of locusts that darken the sky in Bahrain.

The following video is made up of various Twitter footages from Saudi Arabia and Kuwait on February 20, 2020.

The Plagues of Egypt

Meanwhile, Egypt will soon be hit as swarms are heading northbound along the Red Sea.

Rarely since the Exodus of Hebrew slaves from Egypt has the African continent seen locusts swarming throughout Ethiopia, Kenya, Somalia, South Sudan and Uganda.

“And the Lord said to Moses, ‘Stretch out your hand over Egypt so that locusts swarm over the land and devour everything growing in the fields, everything left by the hail’.

“So Moses stretched out his staff over Egypt, and the Lord made an east wind blow across the land all that day and all that night.

“By morning the wind had brought the locusts; they invaded all Egypt and settled down in every area of the country in great numbers.

“Never before had there been such a plague of locusts, nor will there ever be again.

“They covered all the ground until it was black. They devoured all that was left after the hail – everything growing in the fields and the fruit on the trees.

“Nothing green remained on tree or plant in all the land of Egypt.“

Latest News on the Locust Plague