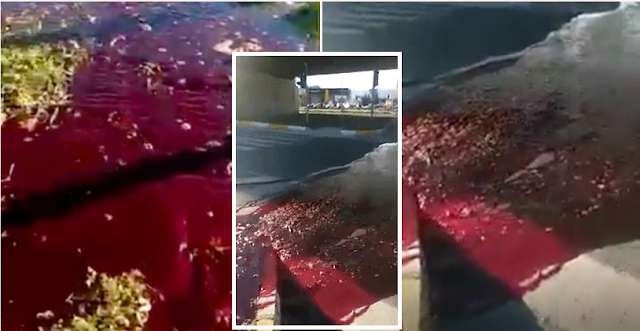 And it produced an unexpected replay of the first plague in Egypt as the river began flowing deep red.

Videos and pictures of red water flowing into the Nile River appeared on the internet soon after the earth stopped shaking.

For the Biblically inclined, the image of a blood-red river evokes a strong message.

Thus says Hashem, “By this you shall know that I am Hashem. See, I shall strike the water in the Nile with the rod that is in my hand, and it will be turned into blood.” Exodus 7:17

The Egyptians and Pharaoh worshiped the Nile as a god. When Moses and Aaron struck at the Egyptian River God was an irrefutable reminder to the Egyptians and to Pharaoh that no matter how advanced or powerful Man is, he will always be dependent and subservient to on his Creator.

According to Jewish tradition, the ten-plagues will reappear before the Messiah as stated by the Prophet Micah.

I will show him wondrous deeds As in the days when You sallied forth from the land of Egypt. Micah 7:15

Causes of the strange red water

The video was heavily discussed when it first appeared on Reddit, suggesting the blood red color:

Istanbul is overdue for a strong earthquake

A few days after the deadly earthquake, Turkish Interior Minister Suleyman Soylu indicated that Istanbul – a city of more than 15 million people – is overdue for a cataclysmic earthquake.

The most populous city of Turkey was built beside the North Anatolian Fault Zone that runs just outside of the megalopolis gates below the Sea of Marmara.

“We expect a M7.5 quake in Istanbul … We are seriously working on the possible scenario of the earthquake,” he told CNN Turk.