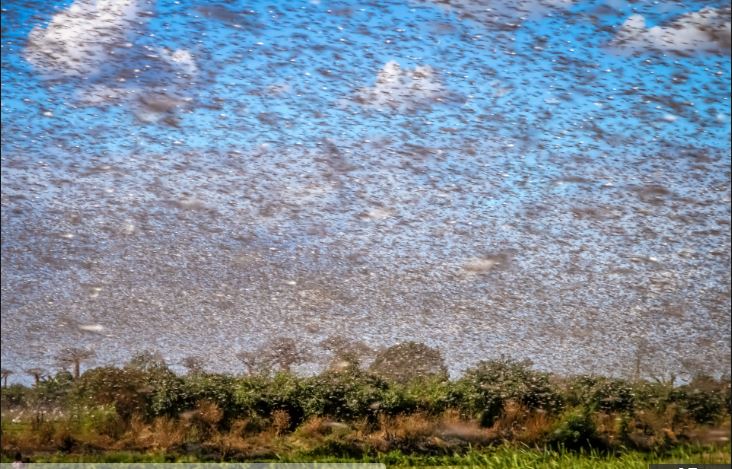 The insects are breeding so quickly that they could grow four hundred fold by June.

The main threats are in East Africa and Yemen, as well the Gulf states, Iran, Pakistan and India. 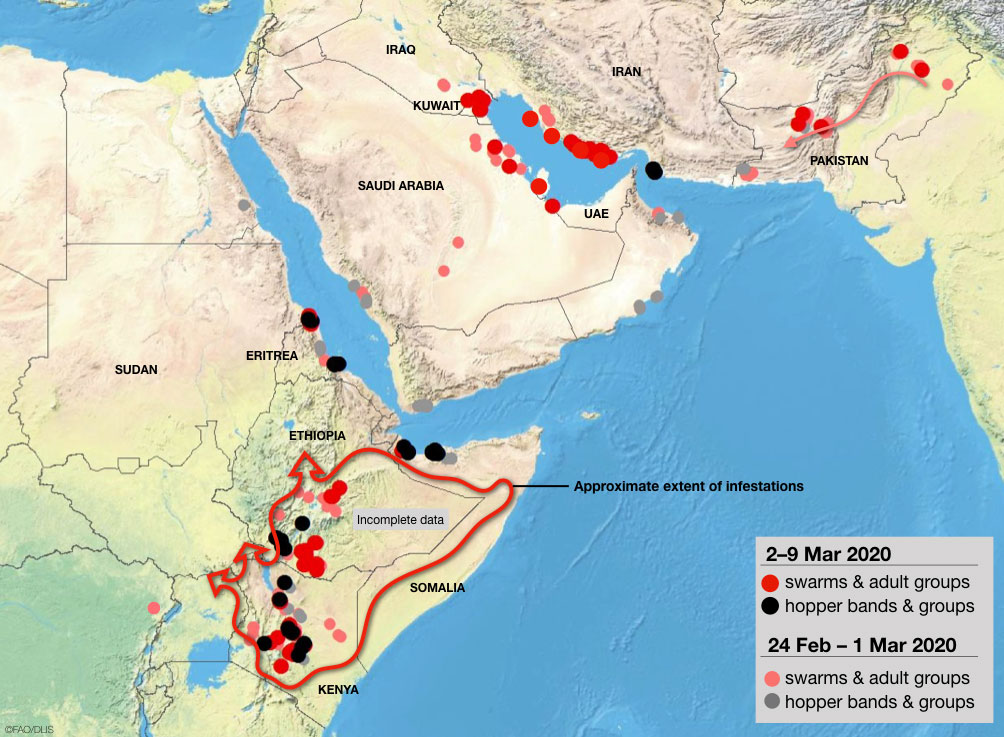 Map showing the current situation of the record-breaking locust plague in 2020. Locust map by FAO

Most recently, locusts have been seen in the Democratic Republic of Congo and swarms have arrived in Kuwait, Bahrain and Qatar and along the coast of Iran.

But locals and officials say there are 3 times more than at the beginning of the year:

Millions of acres of crops have already been destroyed and all attempts to contain or eradicate these pests have failed so far in India, Pakistan and Africa.

Aerial and ground spraying combined with constant tracking of the swarms are viewed as the most effective strategies. But aircrafts are in short supply. 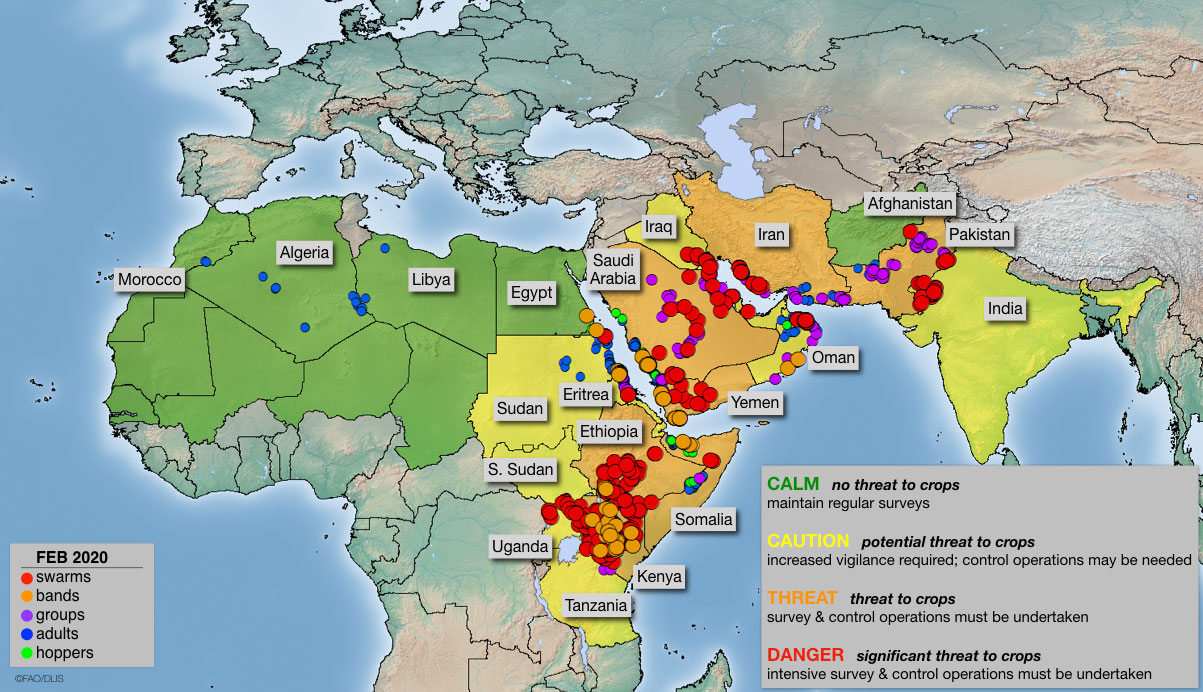 Currently, Ethiopia was using five and Kenya six for spraying and four for surveying. But the Kenyan government says it needs 20 planes for spraying – and a continuous supply of the pesticide Fenitrothion.

See the plague invading an airport on the Abadan Island in southwest Iran:

The Chinese government announced in February it was sending a team of experts to neighbouring Pakistan to develop “targeted programmes” against the locusts. 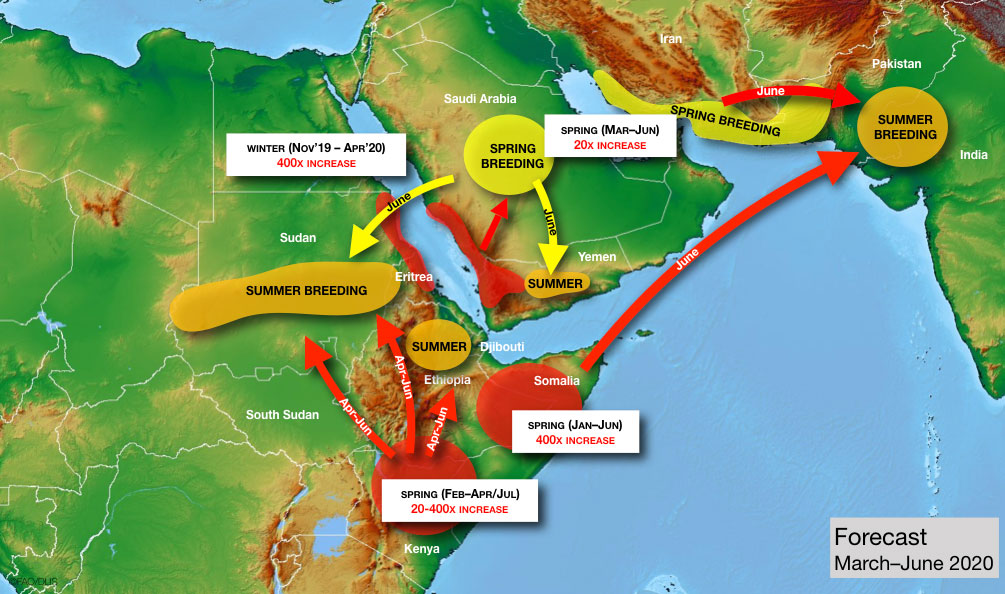 According to reports, China is ready to send 100,000 ducks to its border to devour the insects, telling the birds were “biological weapons,” capable of eating more than 200 locusts a day (chickens can ‘only’ eat about 70 locusts in one day. What about the locusts themselves then?

The situation remains extremely alarming in the Horn of Africa, specifically Kenya, Ethiopia and Somalia where widespread breeding is in progress and new swarms are starting to form, representing an unprecedented threat to food security and livelihoods at the beginning of the upcoming cropping season.

Widespread swarm breeding continues in northern and central counties where an increasing number of hopper bands and first-generation immature swarms are forming.

This may be supplemented by new-generation immature swarms arriving from Somalia.

Breeding continues within a widespread area of Oromiya and SNNPR regions, including the Rift Valley, where early instar hopper bands are forming in some places.

Immature swarms are present in the south where cross-border movements are likely from adjacent areas of Somalia and Kenya.

Late instar hopper bands, maturing adult groups and at least one mature swarm on the northwest coast where egg-laying continues.

Late instar hopper band, fledglings and immature adult group and swarm on the southern coast of the Red Sea near the Eritrea border.

Scattered adults in Tokar Delta, the northeast and in the Nile Valley.

Immature adult groups on the northern coast of the Red Sea near the Sudan border.

Hopper groups on the Buri Peninsula.

Mature swarm and laying adult groups near the Persian Gulf between Dammam and Qaryat Al Ulya.

Immature swarms in the north and near Kuwait City.

Immature swarm on the western coast near Qatar.

Local breeding continues in the southeast where hoppers are forming groups and bands in eastern Hormozgan.

Control operations are in progress.

New generation immature groups and small swarms are likely to start forming in Baluchistan by the end of March.