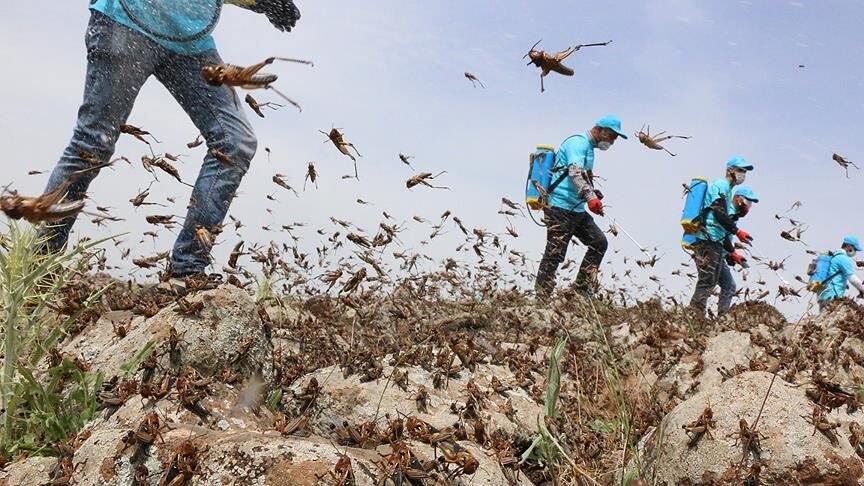 Iran is under its worst desert locust outbreak in the past 50 years and for the second year in a row. Compared with last year, the swarms of desert locusts are much larger, and it is safe to claim that the recent attacks are unprecedented, officials said.

According to the Food and Agriculture Organization's (FAO) situation update on May 27, 2020, adult locusts are forming groups and small swarms in spring breeding areas along parts of Sistan-Baluchistan and the southern coast area as vegetation is drying out.

FAO noted that the infestations will continue moving east to the Indo-Pakistan summer breeding areas. With the worsening situation, Iran may deploy its military to help contain the invasion in the country's southern region.

The outbreak is adding to problems the nation is facing amid its battle against the coronavirus pandemic, as well as the economic turmoil following ending U.S. sanctions.

An official of the Iranian Agriculture Ministry said the military has offered to assist in combating locusts for the second year in a row.

"Compared with last year, the swarms of desert locusts are much larger, and it is safe to claim that the recent attacks are unprecedented," said the secretary of the Chabahar Agricultural Trade Union.

"It's going to be BIBLICAL.
Q" pic.twitter.com/AjxzUU3xps

Amid warnings of another wave of locust attack from Iran & Muskat, Pak top disaster Mgt.official says the country is prepared to deal with it. “We have pesticides available & 9 planes ready for aerial spray.” The UN says the attack can threaten the whole country if not contained. pic.twitter.com/KPdm699IsZ

"The military has promised to help fight the desert locusts, including by providing all-terrain vehicles for use in areas which are hard to access," said Mohammad Reza Mir, a spokesman for the ministry's Plant Protection Organization.

"Last year the military provided personnel and vehicles, and that was a big help."

The provinces of Sistan-Baluchistan, Bushehr, Fars, Hormozgan, Kerman, and Khuzestan have been under the attacks. As of May 28, reports said around 260 000 ha (640 000 acres) have been treated so far.

Based on the agricultural calendar, there is a chance to scale up operations by the end of July to lessen harvest damage. This is also key to reduce locusts' migration to Pakistan and India.

Although FAO's appeal extends until the end of this year, prompt support is needed for both the immediate scale-up until the end of July and to preposition equipment for when locusts occur again in November.