New Aurora Has Been Seen in The Northern Sky

A collaboration between physicists and amateur stargazers has yielded the discovery of what researchers say is a previously unknown kind of aurora phenomenon.

Called ‘the dunes’, this stunning apparition of luminous, rippling wave patterns does not appear to fit within any established categories of aurora – and it’s only been documented now because of a rapport between hobbyist space photographers (aka ‘citizen scientists’) and professional astronomers in Finland.

If this sounds familiar, you might be thinking of Steve – the brilliantly named ribbon-like phenomenon first identified in 2017.

Despite excitement over the discovery, subsequent investigations indicated Steve was not an aurora, technically speaking, but rather a similar kind of atmospheric glow produced by charged particles flowing through Earth’s ionosphere.

While authoring a guide book on the aurora borealis (aka northern lights), computational space physicist Minna Palmroth from the University of Helsinki had her attention drawn to the dunes, which at the time did not fit into the known kinds of aurora.

Shortly after the book was published, members of the Finnish hobbyist community again identified and photographed the dunes phenomenon in the sky, sharing the imagery with Palmroth and her colleagues so they could investigate it.

“One of the most memorable moments of our research collaboration was when the phenomenon appeared at that specific time and we were able to examine it in real time,” says astronomy hobbyist Matti Helin.

“It was like piecing together a puzzle or conducting detective work. Every day we found new images and came up with new ideas.”

The fruits of that team effort are now documented in a newly published scientific paper, which details how the collaboration worked, and also explains what the dunes actually are.

According to the researchers, the dunes emerge at an altitude of about 100 kilometres (62 miles), in the upper reaches of the mesosphere, and visible simultaneously from different locations in Finland and Sweden.

The phenomenon, which has been recorded seven separate times, is suspected to be an example of what’s called a ‘mesospheric bore’, manifesting when waves of oxygen atoms in the atmosphere are excited by interactions with solar wind, producing the glowing, dune-like effects.

“We associate the dunes to the oscillation of the oxygen density, giving a variability to the auroral emission from the variability of the excitation targets within the atmosphere,” the authors write in their paper.

“While the evidence is not sufficient for us to conclude beyond a doubt that the dunes are not a manifestation of variations in the auroral precipitation, we argue they are more suggestive of them being a result of atmospheric waves.” 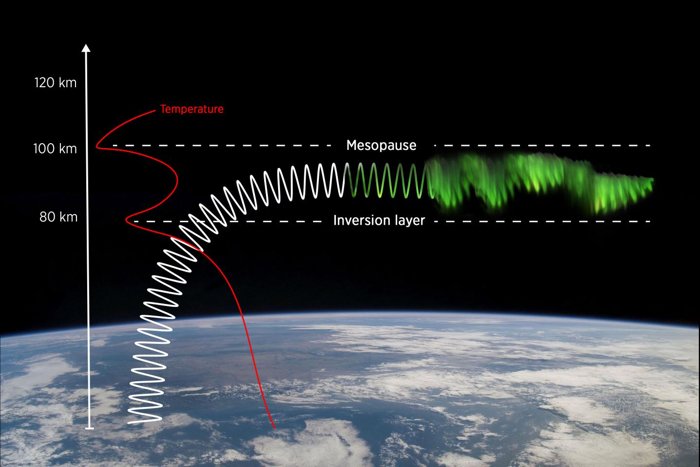 Beyond specific explanations of the physics involved, it’s an inspiring story of how anybody can get involved with science, helping out to investigate strange and exotic phenomena – the understanding of which benefits everybody, a point the authors themselves are eager to emphasise.

“Our paper adds to the growing body of work that illustrates the value of citizen scientist images in carrying out quantitative analysis of optical phenomena, especially at small scales at sub-auroral latitudes,” the researchers say.