Giant Jet appears in the night sky over Paraiba, Brazil 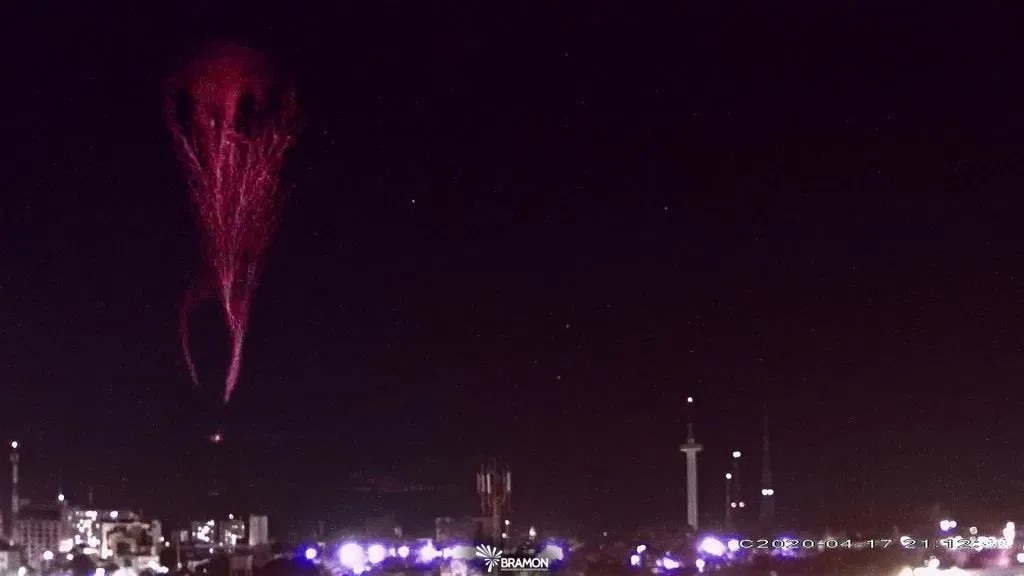 Something out-of-this-world has been recorded in the night sky over Paraiba, Brazil on April 17, 2020.

The newly observed transient luminous event was luckily captured by a camera in João Pessoa, which monitors the skies 24 hours a day:

The giant jet formed over a storm cloud close to Caicó, in Rio Grande do Norte, about 250 km from where it was recorded.

Gigantic jets are the rarest of the known Transient Light Events (TLEs), which are upper atmospheric optical phenomena associated with thunderstorms, like red sprites, blue jets and elves. 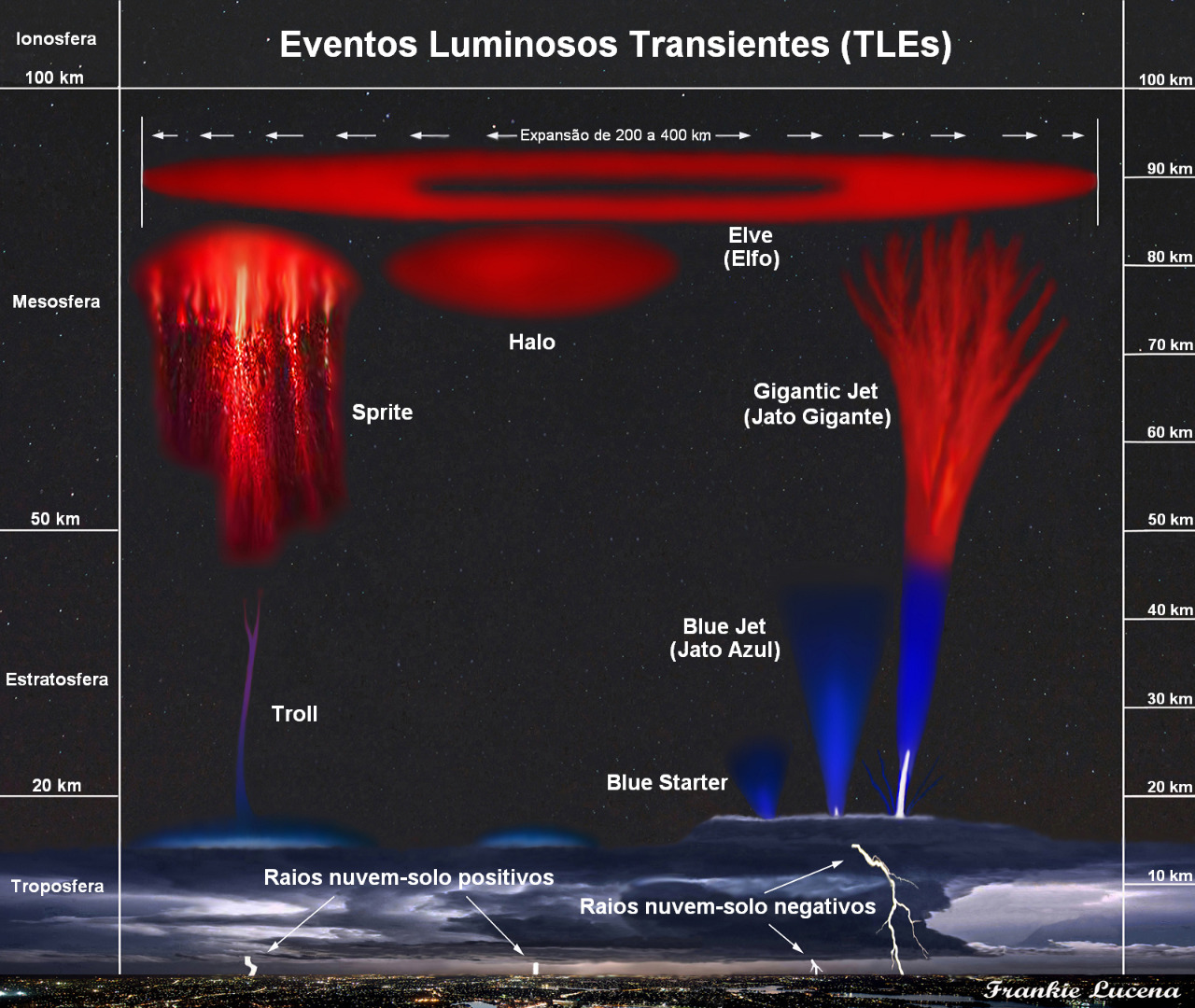 They are similar to carrot-shaped red sprites in spatial extent but propagate upward from the core of oceanic thunderstorms and are not directly associated with cloud-to-ground lightning.

The giant jets are so rare that the first one in Brazil was recorded in 2017 in Taperoá, Brazil.

Other types of Transient Luminous Events

Red sprites are large but weak luminous flashes that appear directly above an active thunderstorm system and are coincident with powerful positive cloud-to-ground lightning strokes.

Their spatial structures range from small single or multiple vertically elongated spots, to bright groupings which extend from above the cloud tops to altitudes up to almost 60 miles (about 95 km).

Sprites are predominantly red and they usually last no more than a few milliseconds.

The brightest region lies in the altitude range 40 to 45 miles (about 65-75 km), above which there is often a faint red glow or wispy structure that extends to about 55 miles (90 km).

Some events are loosely packed and may extend across horizontal distances of 30 miles (50 km) or more.

Their shapes can be variously described as resembling jellyfish, carrots, or columns. Because of their low surface brightness, they have only been imaged at night (primarily with highly sensitive cameras).

However, if ones eyes are sufficiently dark-adapted, one can actually detect them without any visual aid.

The first images of a sprite were accidently obtained in 1989, although anecdotal reports of “rocket-like” and other optical emissions above thunderstorms go back more than a century (see for example an early account by Johann Georg Estor.

Now they are simply referred to as sprites, a whimsical term that evokes a sense of their fleeting nature, while at the same time remaining nonjudgemental about physical processes that have yet to be determined.

Blue jets are a second high altitude optical phenomenon, distinct from sprites and first documented in 1994 (although pilots had earlier reported similar sightings).

Blue jets are optical ejections from the top of the electrically active core regions of thunderstorms, but not directly associated with cloud-to-ground lightning.

Following their emergence from the top of the thundercloud, they typically propagate upward in narrow cones of about 15 degrees, fanning out and disappearing at heights of about 25-30 miles (40-50 km) with a lifetime of a couple of tenths of a second.

Blue starters differ from blue jets in that the are brighter but shorter (reaching to only about 12 miles altitude).

These were reported to occur over regions where large hailstones were falling.

Upward lightning is similar to a conventional lightning bolt, generally rather straight and may be tilted off vertical axis, but does not flicker like cloud-to-ground flashes.

Lasts one, two and even 5 seconds with a yellow or white lightning channel, maybe with blue flames above.

Elves are rapidly expanding (up to 300 miles across) disk-shaped regions of luminosity, lasting less than a thousandth of a second, which occur high above energetic cloud-to-ground lightning of positive or negative polarity.

Elves most likely result when an energetic electromagnetic pulse (EMP) propagates into the ionosphere. Though they can be accompanied by sprites, the causative mechanism is of an entirely different nature.

Predicted to exist in 1991and discovered with a low-light video camera aboard the Space Shuttle in 1992, elves got their name as an acronym for Emission of Light and Very Low Frequency perturbations due to Electromagnetic Pulse Sources.

Sprite halos were mistaken as elves until 1999. They are diffuse disk shaped glows that apparently precede sprites and propagate downward from about 50 miles to 40 miles (85 to 70 km) altitude and last about a millisecond.

Trolls, also recently observed, resemble blue jets, but are red and seem to occur after tendrils of vigorous sprites extend downward toward the cloud tops.

Gnomes are possibly just a different manifestation of blue starters but appear with a more compact shape above convective domes.

Pixies are pinpoints of light, lasting less than 16 milliseconds, on the surface of convective domes that produced gnomes.

Gigantic jets, first documented in July 2002, are similar to carrot-shaped red sprites in spatial extent but propagate upward from the core of oceanic thunderstorms and are not directly associated with cloud-to-ground lightning.