Astronomers monitoring Comet C/2020 F8 (SWAN) spotted a powerful outburst from the comet on May 5. Such outbursts usually indicate a fragmentation, but scientists are hopeful that this could just be a volatile comet. The comet is approaching Earth and the Sun-- its closest will be on May 13 and 27, respectively.

This week, the comet started turning bright enough to be visible to the naked eye and many observers in the southern hemisphere were able to see the object without the use of binoculars or telescopes.

Around May 5, SWAN appeared to have released a huge blast from the comet's surface, leaving a trail of debris. Explosions of gas and dust as it heats up while approaching the Sun may have triggered the outburst, which is an indicator that it might be breaking apart.

However, according to Karl Battams of the Naval Research Lab in Washington, DC, outbursts do not necessarily imply fragmentation, "and ground-based images are not yet showing evidence of a breakup," noting that SWAN may just be a particularly "feisty and volatile" comet.

@Slooh members are rediscovering the art of observing - the oohs and the ahs are fine, but look deeper to analyse what we see - what makes our images and the moment so special?#CometSWAN #C2020F8 @c2020f8 #FollowTheComet #astrophotography

Cracking and exposing veins of a volatile material is usually how fresh comets behave as they get near the Sun for the first time, and SWAN is behaving such.

It has a hyperbolic orbit, which indicates that it has never been near the Sun before, and sunlight touching its surface for the first time may yield unpredictable results.

"It would not surprise me at all to see another outburst-- may be several-- in the coming weeks as it closes in on the sun later this month," said Battams.

Observers in the southern hemisphere are in for a spectacular sight as SWAN is set to make its closest approach to Earth on May 13, at around 85 million km (53 million miles) away.

"This week, observers in the southern United States should get their first glimpse of the comet very low in the eastern sky during morning twilight as it speeds from Cetus into Pisces," said astronomer Bob King.

"The comet's height above the eastern horizon will vary depending on latitude, with more northerly latitudes favored from about May 20 through early June. The peak magnitude of 2.8 is expected around May 21." 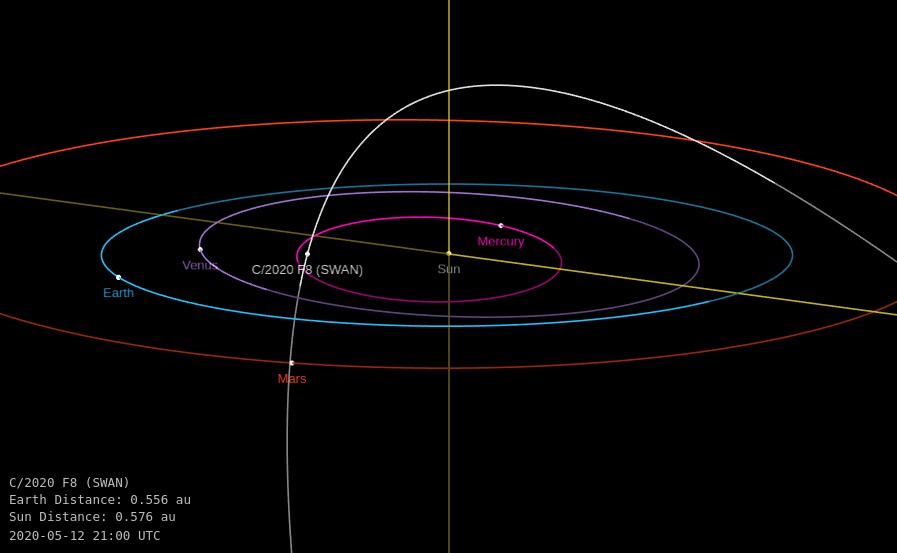 More outbursts could be in the offing, said Dr. Tony Phillips of the SpaceWeather.com. Dates of special interest include May 12 when the comet passes by Earth (0.56 AU) and May 27 when the comet slingshots past the Sun not far from the orbit of Mercury (0.43 AU).

On May 27, it will reach its nearest point to the Sun or perihelion at 64 million km (40 million miles) away.