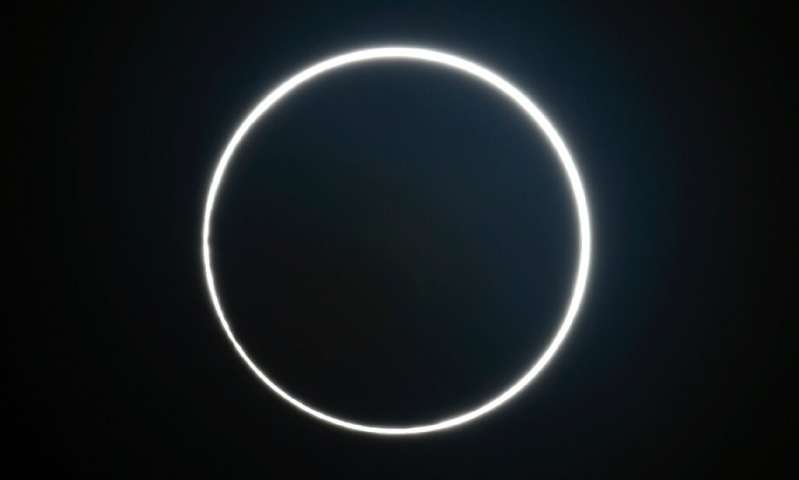 Skywatchers along a narrow band from west Africa to the Arabian Peninsula, India and the Far East witnessed a dramatic "ring of fire" solar eclipse Sunday, June 21, 2020.

So-called annular eclipses occur when the Moon—passing between Earth and the Sun—is not quite close enough to our planet to completely obscure sunlight, leaving a thin ring of the solar disc visible.

They happen every year or two, and can only be seen from a narrow pathway across the planet.

Sunday's eclipse arrived on the northern hemisphere's longest day of the year—the summer solstice—when the North Pole is tilted most directly towards the Sun.

It was first visible in northeastern Republic of Congo from 5:56 local time (04:56 GMT) just a few minutes after sunrise.

That was the point of maximum duration, with the blackout lasting a minute and 22 seconds.

Arcing eastward across Africa and Asia, it reached "maximum eclipse"—with a perfect solar halo around the Moon—over Uttarakhand, India near the Sino-Indian border at 12:10 local time (0640 GMT).

More spectacular, but less long-lived: the exact alignment of the Earth, Moon and Sun was visible for only 38 seconds.

In Nairobi, East Africa, observers saw only a partial eclipse as clouds blocked the sky for several seconds at the exact moment the Moon should have almost hidden the Sun. 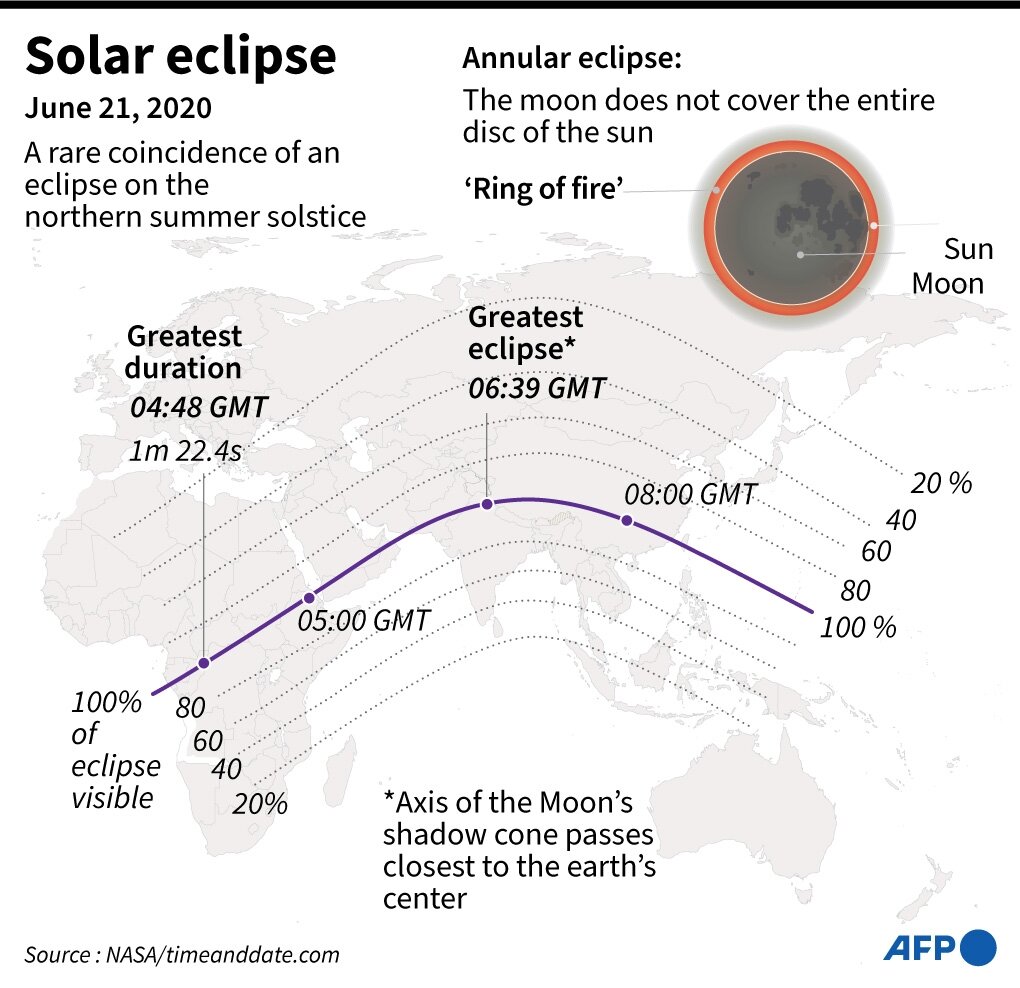 Despite some disappointment, Susan Murbana told AFP: "It was very exciting because I think I'm so obsessed with eclipses.

"Today has been very kind to us in terms of the clouds. And we've been able to see most of it," said Murbana who set up the Travelling Telescope educational programme with her husband Chu.

Without the coronavirus pandemic, they would have organised a trip to Lake Magadi in southern Kenya where the skies are generally clearer than over the capital.

"With the pandemic situation, we're not able to have crowds... and get kids to look through or do stuff," she said, but still managed to share the event on social media.

The annular eclipse is visible from only about two percent of Earth's surface, Florent Delefie, an astronomer at the Paris Observatory, told AFP. Sri Lanka closed its planetarium to prevent a gathering of amateur astronomers due to the coronavirus outbreak, but live-streamed the celestial event on Facebook.

A small group of about 15 students huddled around a telescope at the University of Colombo to watch the eclipse. 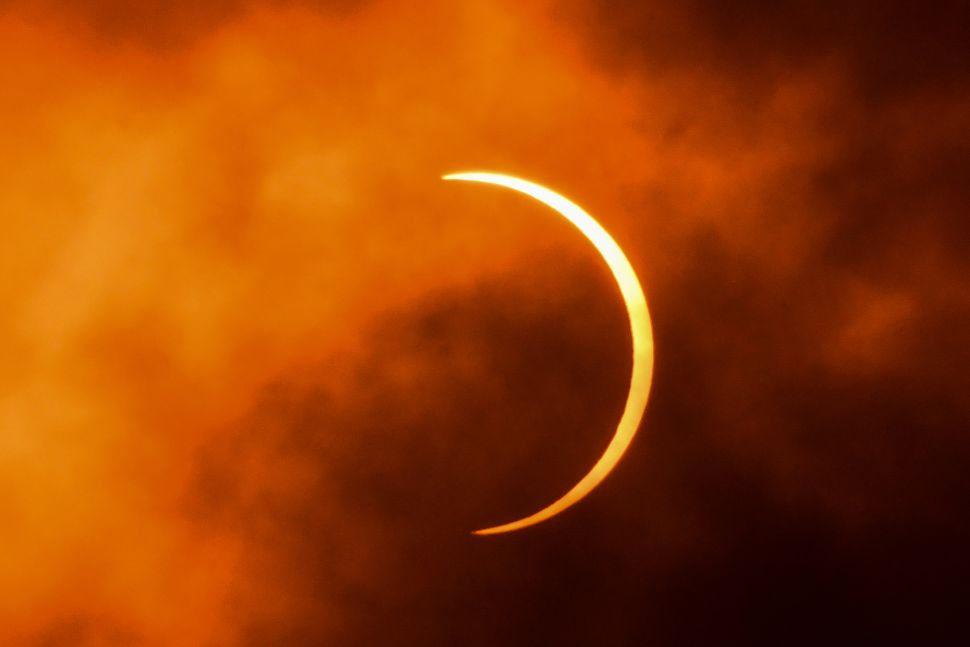 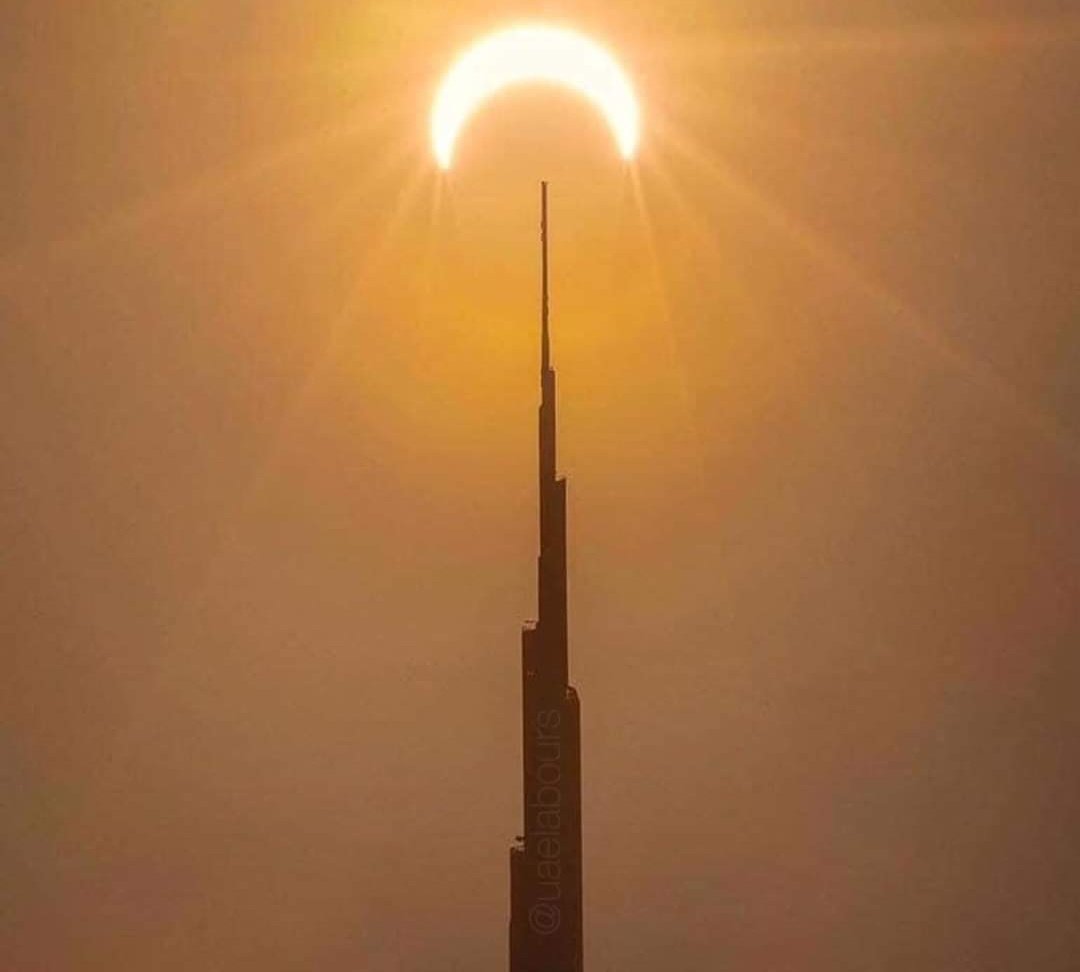 Some students used a welding mask to stare at the sun, while others wore glasses made with filters that cut out ultra-violet rays.

Coronavirus precautions were also taken in Nepal's capital, Kathmandu, as dozens of students and astronomy enthusiasts gathered on a rooftop.

Only a few were allowed at the viewing area at a time, wearing masks and sanitising their hands as they waited their turn.

"I was worried because it is a cloudy day, but the view was excellent," 19-year-old student Swechhya Gurung told AFP.

In Hong Kong, dozens of skywatchers ranging from astronomy enthusiasts with telescopes to families enjoying Father's Day gathered at a waterfront park in east Kowloon to witness the spectacle, which lasted about 90 minutes. 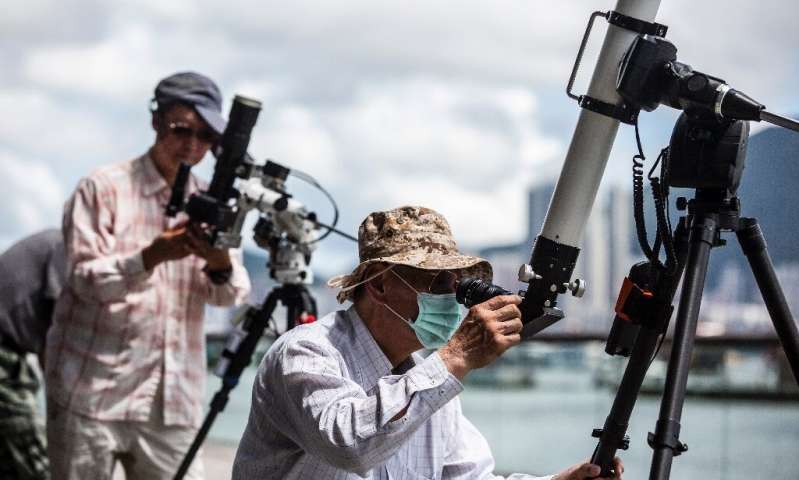 Cheers erupted from the crowd when the cloud cleared and the eclipse was clearly visible.

The full eclipse was visible at successive locations over a period of nearly four hours, and one of the last places to see the partially hidden Sun was Taiwan.

A solar eclipse always occurs around two weeks before or after a lunar eclipse, when the Moon moves into Earth's shadow. Lunar eclipses are visible from about half of the Earth's surface.

A lunar eclipse is due on July 5, with the best viewing over North and South America, southern Europe and Africa.

There will be a second solar eclipse in 2020 on December 14 over South America. Because the Moon will be a bit closer to Earth, it will block out the Sun's light entirely.