NASA Readys for Near Approach of Another Asteroid AN ASTEROID is set to fly by Earth this weekend, coming almost as close to our planet as the Moon is.

A space rock known as 2020 WC4 will be "near Earth" according to NASA, as it swings by our planet on Saturday, November 28. The asteroid will whizz by our planet at a distance of 429,846 miles. For reference, the Moon is an average of 239,000 miles from our planet, in what is known as a lunar distance (LD).

As such, 2020 WC4 will be just 1.8 LDs from Earth on Saturday, before it continues on its voyage around the Sun.

According to observations, the asteroid is travelling at an impressive speed of 5.2 kilometres per second. That is the equivalent of almost 19,000 kilometres per hour.

However, the asteroid is only around six metres wide, according to observations from NASA.

Nonetheless, NASA has classified it as a near Earth object (NEO), which allows them to study the system of the solar system 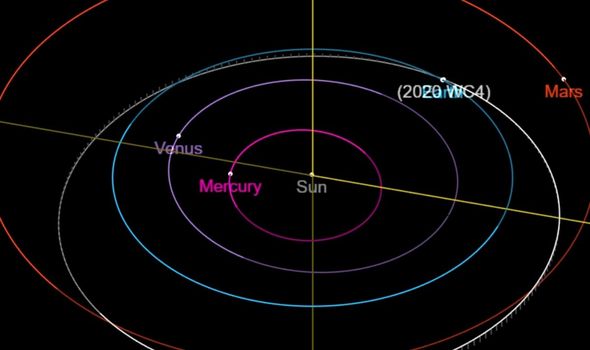 A recent study found Earth is not safe from asteroids, with one in particular - known as Apophis - posing a threat.

Last month, an astronomer from the University of Hawaiʻi Institute for Astronomy (IfA) revealed the 370-metre wide asteroid could still hit Earth.

Scientists had initially ruled out the 2068 collision, but the research showed there is a minute chance - roughly one in 530,000 - the asteroid Apophis could hit Earth.

The new study was announced following the detection of a small Yarkovsky acceleration on the surface of the asteroid.

The Yarkovsky effect is when an asteroid or celestial body changes its orbit due to small push of heat, either from itself expelling gasses, or the gravitational push and shove from celestial bodies including the Sun and Earth.

In this instance, the scientists have discovered a small thermal reaction which could slightly alter Apophis's course, and send it Earth-bound.

A statement from the University of Hawai'i said: "All asteroids need to reradiate as heat the energy they absorb from sunlight in order to maintain thermal equilibrium, a process that slightly changes the orbit of the asteroid.

"The detection of this effect acting on Apophis means that the 2068 impact scenario is still a possibility.

"Further observations to refine the amplitude of the Yarkovksy effect and how it affects Apophis' orbit are underway.

"Astronomers will know well before 2068 if there is any chance of an impact."