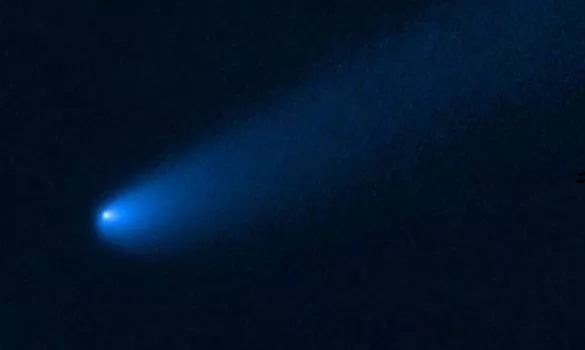 NASA'S Hubble Space Telescope made a surprise find when it spotted a comet with a 400,000 mile tail lingering near Jupiter, the space agency has announced.

Following Jupiter's journey around the Sun are space rocks known as Trojan asteroids. These asteroids are some of the early remnants of the solar system and follow the same path as Jupiter around the Sun. Now, NASA's Hubble Space Telescope has spotted a huge comet lingering near the asteroids.

It is the first time a comet has been seen taking its place in line with the Trojan asteroids.

NASA said: "After traveling several billion miles toward the Sun, a wayward young comet-like object orbiting among the giant planets has found a temporary parking place along the way.

"The object has settled near a family of captured ancient asteroids, called Trojans, that are orbiting the Sun alongside Jupiter.

Analysis from NASA revealed the comet belongs to a family called 'Centaurs'.

Centaurs are icy bodies that live between the orbits of Jupiter and Neptune.

Scientists have called this particular one P/2019 LD2 (LD2) and have managed to track its orbit and future path.

LD2 came close to Jupiter two years ago, and it will come close again in another two years 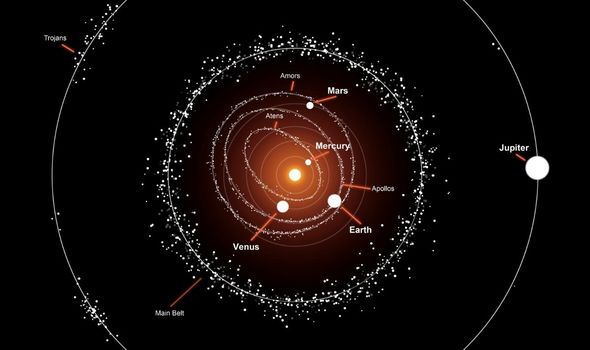 Carey Lisse of the Johns Hopkins University Applied Physics Laboratory (APL) in Laurel, Maryland, said: "The cool thing is that you're actually catching Jupiter flinging this object around and changing its orbital behaviour and bringing it into the inner system.

"Jupiter controls what's going on with comets once they get into the inner system by altering their orbits.

"Short-period comets like LD2 meet their fate by being thrown into the Sun and totally disintegrating, hitting a planet, or venturing too close to Jupiter once again and getting thrown out of the solar system, which is the usual fate.

"Simulations show that in about 500,000 years, there's a 90 percent probability that this object will be ejected from the solar system and become an interstellar comet."

Bryce Bolin of Caltech in Pasadena, California, added: "Only Hubble could detect active comet-like features this far away at such high detail, and the images clearly show these features, such as a roughly 400,000-mile-long broad tail and high-resolution features near the nucleus due to a coma and jets

"The visitor had to have come into the orbit of Jupiter at just the right trajectory to have this kind of configuration that gives it the appearance of sharing its orbit with the planet.

"We’re investigating how it was captured by Jupiter and landed among the Trojans.

"But we think it could be related to the fact that it had a somewhat close encounter with Jupiter."