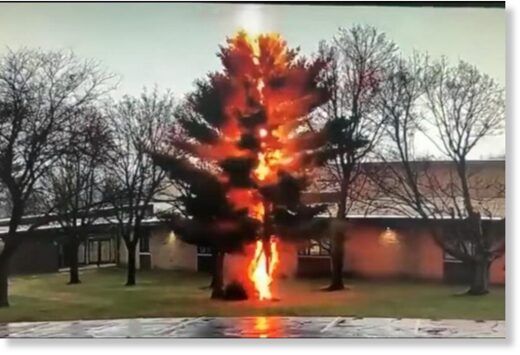 Mother Nature flexed her muscle Thursday when a lightning strike took down a tree outside Wautoma High School.

Principal Jennifer Johnson says it happened at about 8:25 a.m. while 9th and 10th grade students were preparing to take the ACT Aspire test.

No one was hurt and there was no damage to the school.

"Initially, the students and staff were startled by the event; however, after realizing what had just happened, they were fascinated by the rare incident that occurred just feet from them," said Johnson.

The video was captured on the school's security cameras. Johnson shared that footage with Action 2 News.

If you can hear thunder, then you are close enough to the storm to be struck by lightning. Go to safe shelter immediately.

Get out of boats and away from water.

Move to a sturdy building. Do not take shelter in small sheds, under isolated trees, or in soft-top or convertible automobiles.

If lightning is occurring and a sturdy shelter is not available, get inside a hard-top vehicle and keep the windows up.