Gold miners in the Australian Outback recently discovered a gigantic meteorite crater dating to about 100 million years ago.

Found near the Western Australian town of Ora Banda, the newly dubbed Ora Banda Impact Crater is about 3 miles (5 kilometers) across.

This huge hole was likely created by a meteorite up to 660 feet (200 meters) wide, or longer than the length of two American football fields.

When geologists at Evolution Mining, an Australian gold mining company, came across some unusual rock cores at Ora Banda, they called Jayson Meyers, the principal geophysicist, director and founder of Resource Potentials, a geophysics consulting and contracting company in Perth.

Meyers examined the geologists’ drill core samples, as well as rock samples from the site, and he immediately noticed the shatter cones — telltale signs of a meteorite crash.

Shatter cones form when high-pressure, high-velocity shock waves from a large impacting object — such as a meteorite or a gigantic explosion (such as would occur at a nuclear testing site) — rattle an area.

These shock waves shatter rock into the unique shatter cone shape, just like a mark that a hard object can leave on a car’s windshield.

Because “we know they didn’t do any nuclear testing at Ora Banda,” the evidence suggests that an ancient impact crater hit the site. 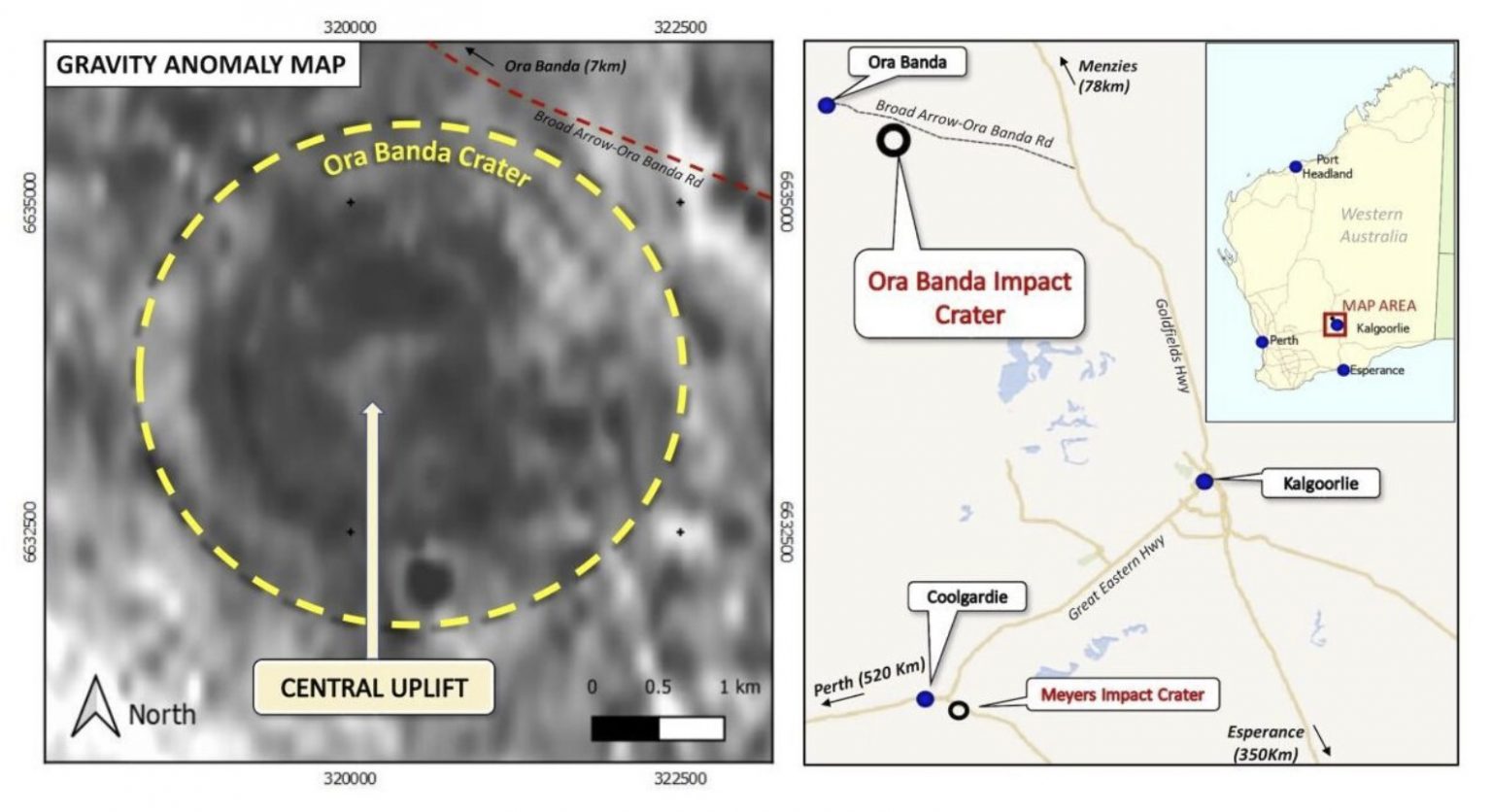 To learn more, Meyers examined the site’s topography (that is, its varying elevations) and examined a gravity anomaly map, which shows how the gravity field at a particular site differs from a uniform, featureless Earth.

Any gravitational anomalies that turn up on the map can give insight into hidden features that affect the amount of mass, and therefore gravitational pull, in a given area. For instance, a mountain range would have more gravitational force than a featureless surface, while an ocean trench or crater would have negative gravity anomalies, the Earth Observatory explained.

Meyer’s work revealed a hidden impact crater with a pucker in the middle. This pucker is where shattered rocks came back to the surface after the meteorite struck, like a compressed spring that bounces back. When the geologists went to the “pucker” part of the site, they discovered shatter cones in the rocky outcrops.

Now, scientists from Curtin University in Perth are investigating the Ora Banda site on a microscopic level. In particular, the team will examine whether minerals at the site were vaporized and then re-crystallized under high pressures.

“The energy released when the [meteorite] impacted would have been more than the combined energy from every atomic test ever conducted,” explains Meyers.

Research on zircons and other minerals from the crater will likely reveal when the meteorite struck — right now, Meyers thinks it hit between 250 million and 40 million years ago.

If it struck after the Cretaceous period ended, about 65 million years ago, this meteorite wouldn’t have bothered the non-avian dinosaurs, because they were already dead.

The dinosaur-killing asteroid was much larger and more lethal. That asteroid, which hit the area that is now Mexico’s Yucatan Peninsula, was about 6 miles (10 km) wide and left an impact crater about 90 miles (150 km) across.