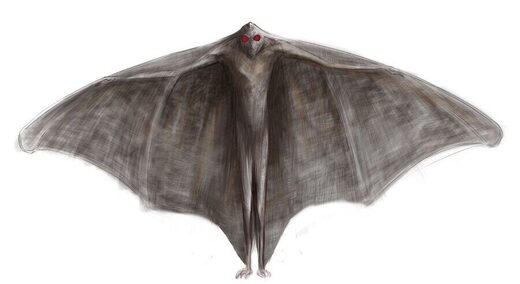 I had just left work at the USPS Sorting Facility at O'Hare Airport at about 11:00 pm on Thursday the 24th of September and was walking out to my car when I saw something standing at the far end of the parking [lot] where I usually park . At first I thought it was a very tall person with a long coat. As I got closer to my car, I unlocked my car, which caused my headlights to come on. My headlights hit the person standing about 20 to 25 feet from my car causing it to turn and look right at me.

I saw that this was not some person but some red-eyed [creature], and what appeared to be a coat were actually wings which it spread out as it turned to look at me. At first I thought it was some kind of very, very large bird, but I've never seen any bird that stood almost seven feet tall. I'm 5'4" and this thing looked taller than me by at least two feet. This thing then started making some type of chirping sound, almost a half chirp and half click like someone was clicking their tongue but much much faster. It then made some type of screeching sound and took off running toward me, it got to within 10 feet of me and took off into the air and flew above me.

I was screaming hysterically as I crouched down behind cars open door and I dived into my car head first. I was in a near panic as I tried to start the car, close and lock the doors and turn on my interior lights. I started my car and took off out of the parking lot and flew down the road till I hit the main road. I got home and told my husband who also works at the same facility and he was the one who told me about the sightings of this thing. I was scared shitless and hope I never see this thing again. This thing is roaming around the area, scaring people half to death. I hope the airport people decide to do something about this thing someday.

Navarette was able to meet with the witness to discuss her sighting, although she "was at first reluctant to discuss the issues after the initial report."

According to Navarette, "The witness is a 17-year veteran of the USPS and has worked at the O'Hare sorting facility for the last 15 years. She advised that on the night in question, she was walking toward her car after her shift had ended and was checking her text messages on her phone as she made the familiar walk to her vehicle. I asked her if there were other people around, to which she answered no, as most of the other employees leave right at shift change and she usually sticks around to take care of the transition."

"As the witness walked to the car, she noticed what looked like a very tall man at the very far end of the parking lot that she reasonably thought was one of her fellow co-workers," he continued. "As she walked toward the car, she deactivated the car alarm which automatically turned on the car headlights. The headlights illuminated the person at the other end of the parking lot and it turned toward her revealing a pair of bright red eyes and it spread what looked like a giant pair of wings. When asked how big the wings were, she could not give me a definitive answer but guesstimated that they must have been between 10 to 12 feet across. The being then began making a series of clicking noises which she described as a cross between a click and a chirping sound. The being then let out a loud metallic screech that she described to [me as sounding] like the brakes on a large truck or train."

Then, said Navarette, "The witness described [how] it began running toward her in these very long strides, at which [point] it took off into the air. When I asked her to describe the being and how it looked or flew, she said she did not look up at it as she was too busy flinging the car door open and diving into her car while screaming. The witness stated that she started her car and turned on the interior lights all while trying to keep her wits about her. When [I] asked her if she saw which way the creature flew away, she advised that she 'Didn't care where it flew off to and she was not gonna stick around to find out.' The witness advised that she left the area in a hurry and did not slow down till she had left the area and had joined the main road and traffic."

The sound described by the witness is similar to that reported by witnesses in Rockford, near Hedgewisch Park and on the southern end of Northerly Island in Chicago, and in another encounter near O'Hare. The witnesses in those incidents said they heard a sound like screeching brakes during or prior to their sightings.

O'Hare International Airport has been the epicenter of recent winged humanoid sightings in the Lake Michigan Mothman investigation, with at least 10 sightings coming from the airport itself since August of 2019, and many more reported in the surrounding communities.

This report constitutes the latest news in a string of 'Mothman' sightings from within a few hundred mile radius surrounding Lake Michigan, including every state bordering the great lake. These sightings ostensibly began in the spring of 2017, but more historical accounts are being reported as more people become aware of the phenomenon. They generally take place in the evening or at night, often in or near a park or natural area, and around water. Witnesses consistently describe a large, gray or black, bat or bird-like creature — although in a small number of cases the creature was described as insect-like — sometimes with glowing or reflective red, yellow, green, or orange eyes, and humanoid features such as arms and legs are often reported. Some witnesses have reported feeling intense fear and an aura of evil emanating from the creature they encountered. Many of the sightings are also of something seen only briefly or are described only as a flying creature with few details, which leaves open the possibility that a misidentified large bird — such as a heron or crane — or some type of anomalous avian species could explain some, although certainly not all, of the encounters. A number of associated high strangeness incidents have also occurred alongside the creature sightings; including reports of UFOs, other anomalous flying creatures and mysterious humanoids, parapsychological phenomena, and bizarre events experienced by those investigating the sightings.

To report a sighting reach out to us directly at the Singular Fortean Society through our contact page.

You can view a timeline of the sightings so far here.