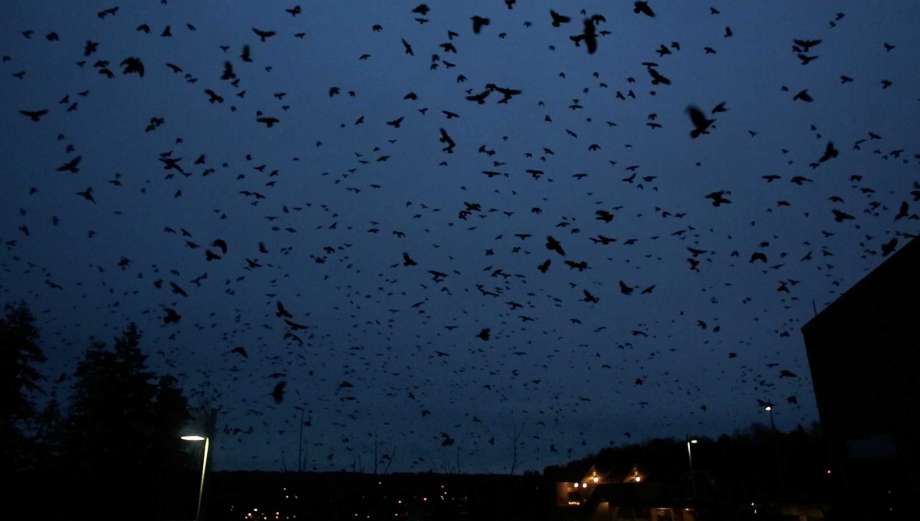 Crows are also associated with death and dying… And the epidemic outbreak is more than apocalyptic in Washington State. Similar scenes, where millions of crows are showing in massive murders have also been reported in China, Italy, Spain, Iran, UK, and even Tajikistan, sparking fears of incoming crisis

If a congregation of crows is called a murder, then the nightly gathering at North Creek Wetlands could be described as a massacre.

At dusk the sky darkens over the University of Washington Bothell as up to 15,000 pitch-black crows descend on the campus. Swooping and cawing, they come from all directions to roost for the night.

Those crows join up with more crows along their nightly route and eventually a murder of many thousands of crows converges on the rooftops and trees around the University of Washington.

The mammoth mob might seem ominous to a casual onlooker.

But it’s roused the curiosity of Bothell educators and students that are working to better understand crows and their connection to humans.

Four years ago, as a freshman, Colton Niblack was caught off guard when he first spotted the flying horde gathering overhead in 2012. “I thought it was the apocalypse,” he said.

Like many others, Niblack’s initial surprise turned to intrigue. Now, he’s studying the crows alongside fellow biology students and UW researchers. The clever creatures could give them insight into the evolution of intelligence.

Crows have left their mark on culture too. For centuries, they’ve fascinated people all over the world.

Crows are known to recognize and remember people’s faces and share that information. They mate for life and are thought by some to hold funerals for their dead.

Flying in the face of the slur “birdbrain,” some have showed their smarts by making and using tools, a feat few animals have accomplished.

People have even reported getting gifts from the avians. While other birds’ numbers are dwindling, crows have adapted and are thriving alongside humans.

The American crows started coming to roost in the treetops of a restored wetland at UW Bothell about 10 years ago. After spending the day scavenging for food in their usual spots around Seattle, Monroe, Everett and Edmonds, they take safety in numbers as night falls.

As the sun sets, small groups of crows sail through the air above campus. One by one they land, perching on rooftops and along fence posts.

There seems to be a pecking order as some wait longer than others before heading to the roost for the night. At dawn, they rise, making their way back to their feeding spots.