Bizarre footage has emerged of a pink glowing object suspending in the dark sky just hours after a huge fireball fell from space.

The clip, which went viral on social media in China, left witnesses baffled when they saw it on the highway in the city of Delingha of Qinghai province across the Tibetan Plateau on December 23.

In the video, the bright pink-hue UFO appears to be stationary as the motorist drives on the deserted highway.

The object seems to be glowing around a sphere and it can be seen from various angles in the nearby area.

Many viewers said it resembled a moon but some said the light gathered like a cloud formation.

One said: "Isn't there an alien base in Delingha? Maybe they are returning to the base?"

"What is this?" another asked. "This is close to that famous 'alien ruins'!"

A woman told a local newspaper: "This is not a moon, it's more like a cloud, a glowing pink one.

"It stayed for 35 minutes to 40 minutes and disappeared."

This incident came just 12 hours after a mass sighting of a glowing meteor plunging towards the city of Yushu, somewhere 700km south of Delingha. 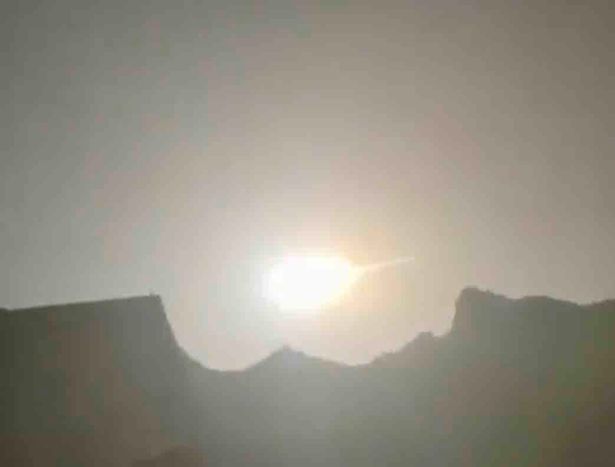 The fireball was seen emitting a bright white light while passing above the towns.

It was also recorded by the China Earthquake Networks Center, which said on social media that it had reports of a suspected bolide - a form of a very bright meteor - landing between Nangqian County and Yushu County at 7.25am on Wednesday, December 23.

There are speculations that the glowing pink light could be emitted from the bolide but experts have yet to identify it.

Watch: Mammoth Ball of Fire 'Falls from the Sky', Crashes into Ground in China