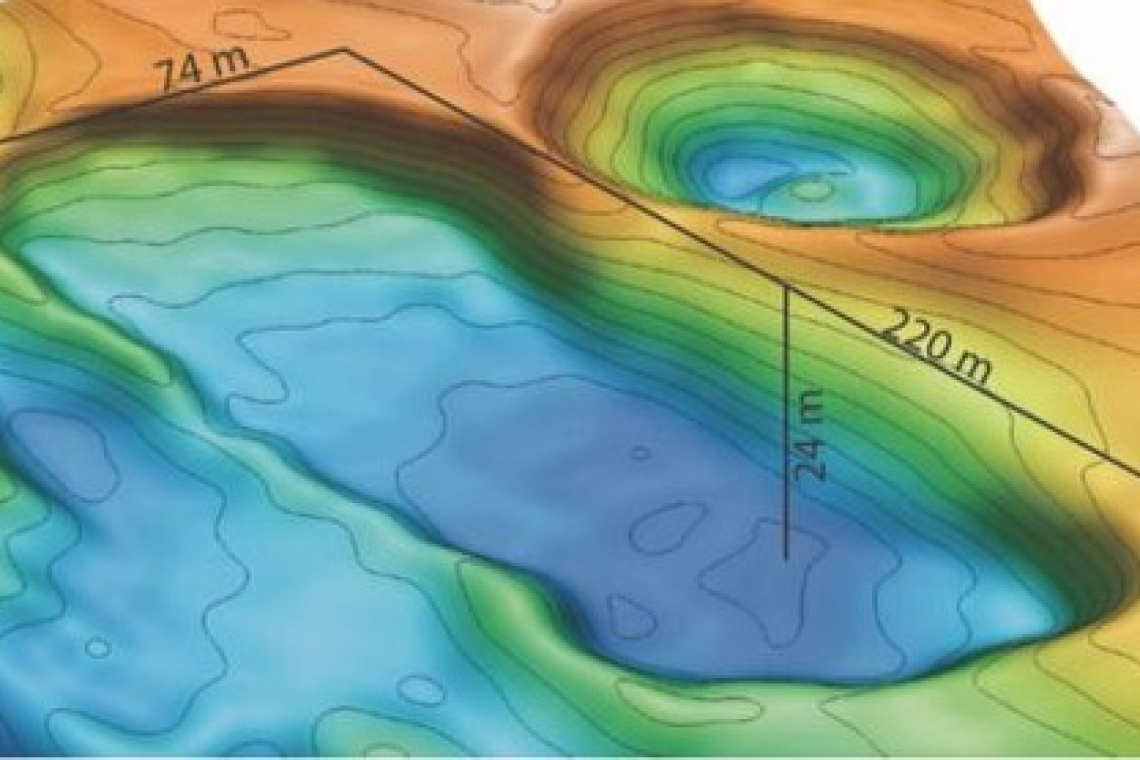 Giant "sinkholes" — one of which could devour an entire city block holding six-story buildings — are appearing along the Arctic seafloor, as submerged permafrost thaws and disturbs the area, scientists have discovered.

But even though human-caused climate change is increasing the average temperatures in the Arctic, the thawing permafrost that's creating these sinkholes seems to have a different culprit — heated, slowly moving groundwater systems.

The Arctic permafrost at the bottom of the Canadian Beaufort Sea has been submerged for about 12,000 years, since the end of the last ice age, when meltwater from glaciers blanketed the region. Until now, the frozen seafloor had been hidden from scientists' peering eyes. This remote part of the Arctic has only recently become accessible to researchers on ships as climate change causes the sea ice to retreat, the researchers said.

With access to the area, the study researchers relied on both ship-based sonar and an autonomous underwater vehicle (AUV) to complete high-resolution bathymetric surveys of the Canadian Beaufort Sea.

"We know that big changes are happening across the Arctic landscape, but this is the first time we've been able to deploy technology to see that changes are happening offshore too," Charlie Paull, a geologist at Monterey Bay Aquarium Research Institute (MBARI), said in a statement. "While the underwater sinkholes we have discovered are the result of longer-term, glacial-interglacial climate cycles, we know the Arctic is warming faster than any region on Earth," added Paull, who co-led the research with Scott Dallimore from the Geological Survey of Canada and Natural Resources Canada, with an international team of researchers.

When the researchers first started undertaking seafloor surveys in the region in 2010, they focused on the shelf edge and slope in the Canadian Beaufort Sea. About 110 miles (180 kilometers) from the shore, they spotted a 59-mile-long (95 km) band of unusually rough terrain along the seafloor. That stretch of seafloor once marked the edge of the Pleistocene permafrost during the last ice age. The team wondered what was causing the rugged nature of the ocean bottom.

To understand how this roughness evolved over time and what might be causing it, the team conducted three more surveys, using AUVs in 2013 and 2017 and then ship sonar in 2019. These snapshots of the same areas over time showed the emergence of steep-sided and irregularly shaped depressions. The largest sinkhole-like crater is a whopping 738 feet (225 meters) long, 312 feet (95 m) wide and 92 feet (28 m) deep, the researchers said.

Here's how the researchers propose the circular holes are forming: As gradual warming thaws the permafrost beneath the Arctic Shelf, an area that was once filled with a solid (frozen ground) becomes fluid. The surface material then collapses into that liquid-filled void; these seafloor collapses happen intermittently over time, the researchers said.

In some areas, where the discharge of this warm groundwater is more limited, the seawater on the floor stays cold enough that any groundwater percolating up refreezes once it's reached near-surface sediments. That frozen sediment expands, heaving upward to form little conical mounds called pingos. These frozen mounds interrupted by the sinkholes are responsible for the unusual roughness that the researchers first spotted in their surveys.

The surveys also showed that the sinkholes are expanding over time. "The continued enlargement of some depressions observed over multiple surveys indicates that the development of these depressions is part of on-going processes," the researchers wrote in their research article published online March 14 in the journal Proceedings of the National Academy of Sciences.

As for the cause, the researchers said that slow changes in climate related to the ending of the last ice age — which have been occurring for thousands of years — are the likely culprits that started the cycle. Once the submerged permafrost begins to melt, the heated groundwater from that melted permafrost inches upward along the bottom of the still-frozen permafrost, leading to more thawing of those sediments above. The process continues in this way to give birth to lots of divots.