A ‘Swarmageddon’ of Locusts Decends Upon India's Capital 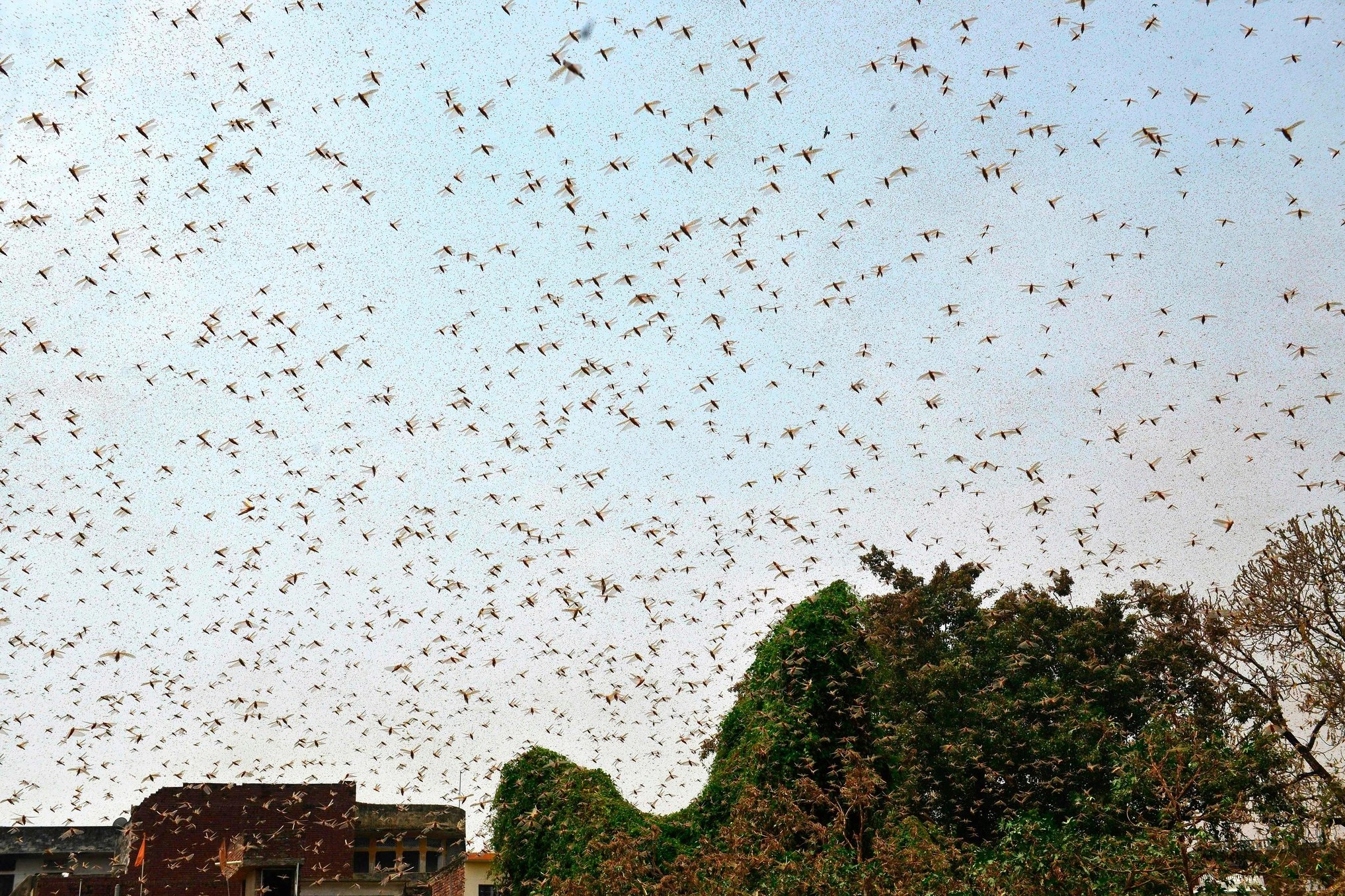 NEW DELHI — A miles-long cloud of locusts swarmed India’s capital region over the weekend, flying through metro stations and playgrounds, invading sugar cane fields and threatening major losses to the agriculture sector at a time when coronavirus restrictions have already caused the loss of millions of jobs.

Indian officials have struggled for weeks to contain the country’s worst locust invasion in decades, as the insects have moved from western regions to the New Delhi area and farther east to Nepal despite efforts to douse crops with pesticides and kill swarms using drones. More than a half-dozen Indian states have been affected.

In a year punctuated by cyclones, heat waves, surging coronavirus infections and overwhelmed hospitals, scientists warn that the locusts could push agrarian parts of India to the brink of disaster, severely disrupting food supplies and slashing earnings for millions of struggling farmers.

Hari Chand Sharma, a prominent Indian entomologist and agriculture scientist, said the number of locusts in the country could top a trillion if the spread were not checked. He blamed foreign nations for not doing more to stop the insects from traversing large parts of Africa, Asia and the Middle East this year.

“There were hardly any containment measures taken at all,” he said, noting that India had weathered around 20 locust swarms this year, about 10 times the average. He said that coronavirus restrictions may have played a role in the inaction, but that governments had been lax in the past, too.

India’s locust problem began when millions of the insects flew in from Pakistan and Iran a few months ago. Scientists say unusually warm water in the Indian Ocean triggered heavy rains over East Africa and the Arabian Peninsula, creating ideal conditions for desert locusts and leading to serious infestations in countries like Kenya and Somalia.

In India, after hungry swarms crossed into the state of Rajasthan, officials mounted pesticide sprayers on hundreds of tractors in an effort to save farms. In a single day, a modestly sized swarm can eat as much food as 35,000 people and travel more than 100 miles.

Strong winds in recent weeks have blown the locusts farther into India, dispersing the insects across the northern plains. For several hours on Saturday, thick swarms darkened the skies over the outskirts of New Delhi and in Gurugram, a neighboring city.

Local officials placed the capital region under “high alert.” Residents set off fireworks, banged kitchen utensils and blasted music from their balconies to chase away the locusts. The Times of India, a leading newspaper, called the attack “swarmageddon.”

“The sky was almost invisible,” said Madhusudan Satija, who was outside his apartment building in Gurugram when the swarm passed. “It was so terrible. They were sticking to the building wall like a thick layer of wet mud.”

Will Anything be left for 2021 ?#Locust Heading towards #Delhi#LocustsAttack pic.twitter.com/XlgWZcXLjo

Initial damage assessments were modest. Officials in the state of Haryana, which includes Gurugram, said only a few thousand acres of crops had been damaged.

But as a new planting season nears, farmers worry that more than 200 million acres of rice, sugar cane, cotton and soybeans could be decimated. In parts of Rajasthan, more than 60 percent of crops have been damaged, and a government relief package has covered only a small fraction of farmers, according to local news outlets.

The coronavirus has complicated efforts to stop the locusts. With confirmed infections topping 500,000 nationwide and many cities still under partial lockdowns, officials have strained to keep supply chains open and enforce locust containment measures across state borders.

Opposition politicians have seized on the lapses and accused Prime Minister Narendra Modi’s government of negligence. 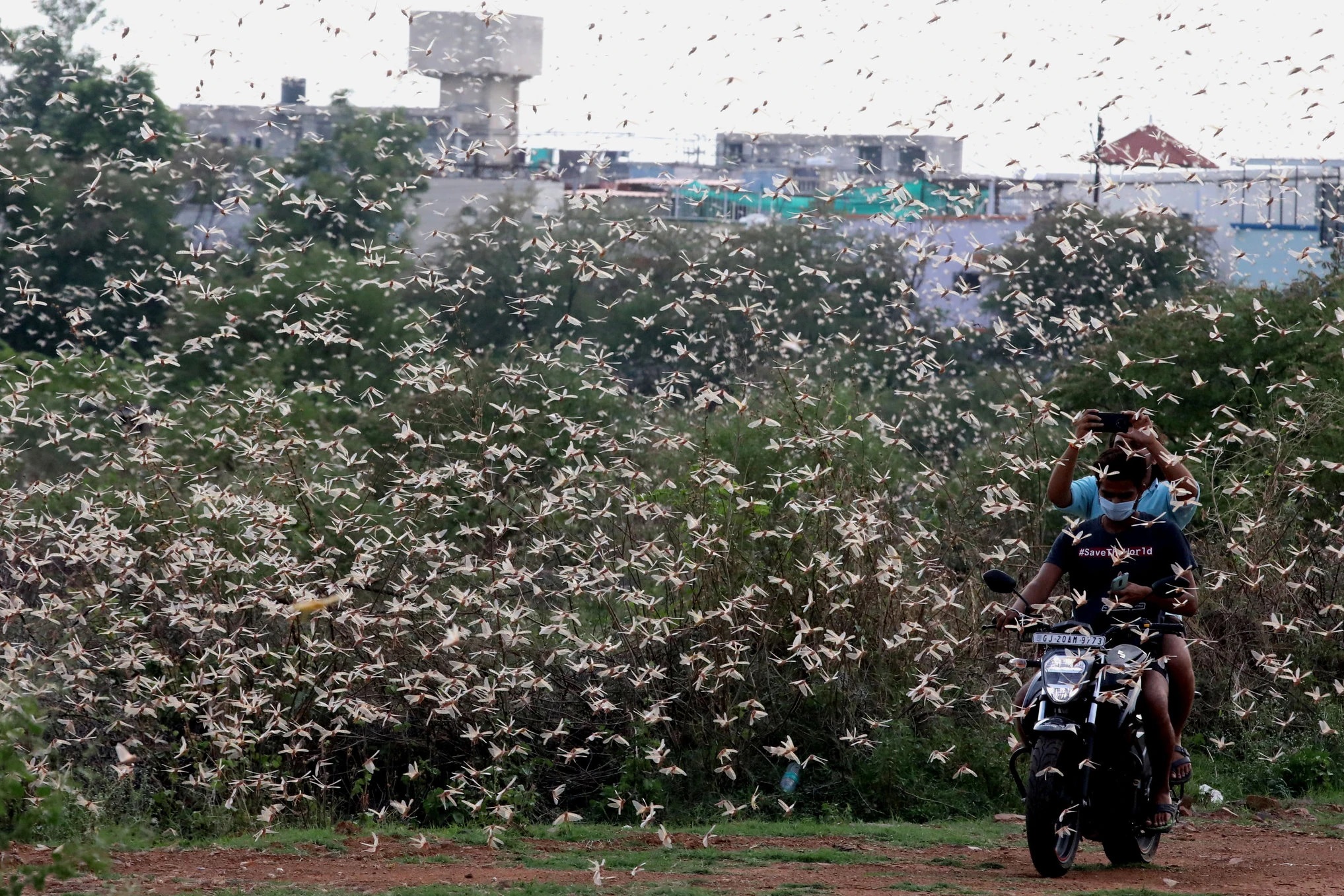 Randeep Surjewala, a spokesman for the opposition Indian National Congress party, said insurance companies were refusing to compensate farmers for their losses because the central government had not classified locust swarms as natural disasters.

Mukhtar Abbas Naqvi, a minister in Mr. Modi’s cabinet, shot back over the weekend, chastising the Congress party as using the locust crisis to “turn disaster into anarchy.”

“In the time of a calamity, there is torment by locusts and losers, and both should be dealt with strongly,” he said.

With the monsoon season looming, Dr. Sharma, the entomologist, said the next few months would be critical. As heavy rains nourish the soil and the locusts begin to breed, he said, officials will need to move aggressively against the insects. Even then, their efforts may not be enough.

“They practically feed on anything,” Dr. Sharma said. “First they eat leaves, and then fruiting bodies like maize, seeds, parts of legumes, flowers, young fruits. If they still persist, they will damage future crops of lentils in Rajasthan, and in Haryana and Uttar Pradesh.”

“No crops are left standing when swarms attack,” he added.