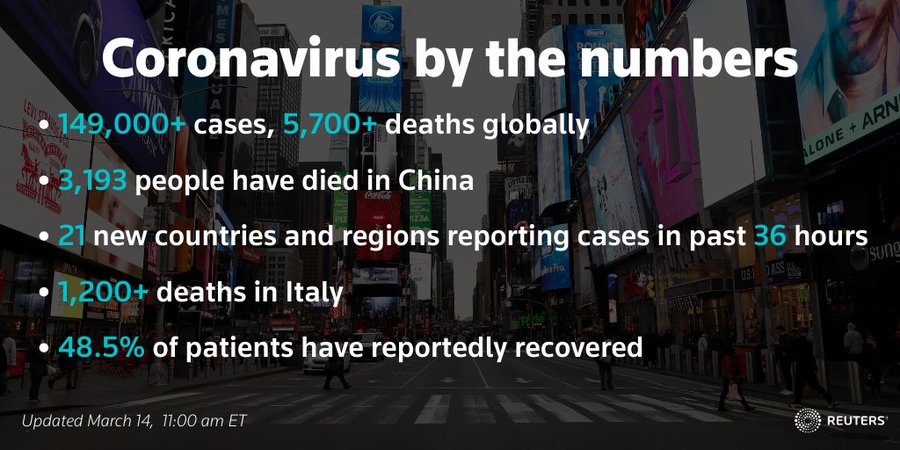 The Spanish government is poised to declare a 15-day national lockdown on Monday to battle coronavirus.

Under the decree being finalised, people would be allowed out only for emergencies, to buy food, or for work.

With 191 deaths and 6,046 infections, Spain is the worst-hit country in Europe after Italy, which declared a nationwide lockdown on Monday.

The US is extending its European travel ban to the UK and the Republic of Ireland from Monday.

President Donald Trump confirmed the news in answer to a reporter's question at the White House.

On Friday, the World Health Organization (WHO) said Europe was now the "epicentre" of the pandemic.

What is the situation in Spain?

Prime Minister Pedro Sánchez discussed the emergency measures at a meeting of his cabinet in Madrid. The restrictions are expected to come into force at 08:00 (07:00 GMT) Monday.

All public transport would be cut back with airline, train, bus and boat operators told they need to cut their services by at least half and that any plane, train, bus or other means of transport can only be a third full, Reuters news agency reports.

The interior ministry would control all police forces, including those at local and regional level.

Adding to the drama, Deputy Prime Minister Pablo Iglesias broke his own quarantine - which he went into after coming into contact with an infected colleague - to attend Saturday's talks.

It had not been possible for Mr Iglesias, who did not test positive for the virus, to attend remotely and his presence was agreed with the government after sanitary measures were taken, government sources told Efe news agency.

Two other ministers who are ill with coronavirus, Irene Montero and Carolina Darias, did not attend.

This will be the second state of emergency in the country since the transition to democracy began in 1975, the first being a 2010 air traffic controllers' strike.

Some measures have already been enforced at local level. The authorities in Madrid and its surrounding area have ordered the closure of most bars, restaurants and shops.

Shops selling foodstuffs, pharmacies and petrol stations are exempt. Similar measures have been brought in elsewhere, including the regions of Galicia and Catalonia.

The mayor of the southern city of Seville said he had suspended the famous Easter processions.

Catalan regional leader Quid Torra has said he wants to seal off the whole region, and has asked the authorities in Madrid to block access by air, rail and sea.

On Thursday the region's authorities locked down four towns north of Barcelona with a high number of cases.

Airlines are also stopping flights to Spain. Low-cost leisure airline Jet2 turned back planes in mid-air on Saturday as it announced it was cancelling all flights.

All but "essential travel" to parts of Spain should be avoided, says the UK Foreign and Commonwealth Office.

Why is Europe the 'epicentre'?

More than 132,500 people have been diagnosed with Covid-19 in 123 countries around the world, according to the WHO.

The total number of deaths has reached about 5,000 - a figure Dr Tedros described as "a tragic milestone".

"Europe has now become the epicentre of the pandemic, with more reported cases and deaths than the rest of the world combined, apart from China," he said.

"More cases are now being reported every day than were reported in China at the height of its epidemic."

As well as the increases in Spain and Italy, France has now confirmed 3,661 cases and 79 deaths.

Germany has seen 3,675 cases and eight deaths. There have been 798 confirmed infections in the UK and 11 deaths.

A number of European states are enforcing border closures:

Belgium, France, Switzerland and parts of Germany are among the latest countries to close schools.

There are also widespread curbs on large gatherings and measures to close theatres, restaurants and bars.

Why Europe could be worse off than China

The number of cases of coronavirus reported every day in Europe has surpassed China at its peak.

But Europe is in a worse position.

The overwhelming majority of China's cases were in one place, Hubei province, and those were largely concentrated in one city, Wuhan.

The outbreak was dealt with by an authoritarian government that imposed the biggest quarantine in human history.

While there are hotspots in Europe, this is an outbreak across a continent, and different countries are adopting very different strategies for dealing with coronavirus.

All these figures are based on cases that have been detected, but scientists fear there could be large outbreaks going on unnoticed in countries that don't have the tools to spot them.

Latest Coranavirus figures from the U.S.