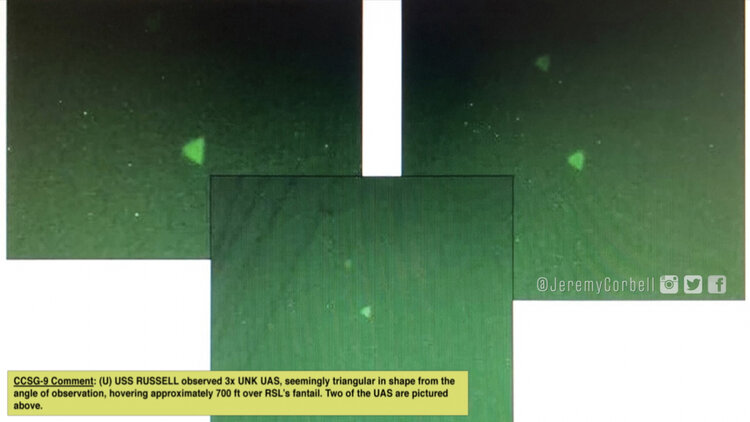 On May 1st, 2020 a classified briefing was generated about the UFO / UAP presence, via the Office of Naval Intelligence (ONI). Those familiar with the briefing articulated to me that the goal was to de-stigmatize the UAP problem and to promote more intelligence collection regarding UAP incursions and encounters with active military deployments. This UAP briefing was a build-on to a previous ONI briefing, generated October 18th, 2019. Both were distributed across a wide range of intelligence networking platforms (such as SIPRNet, JWICS, and various Intelink systems).

I was able to obtain information regarding these and other UAP related briefings - as well as - two unclassified slides and some of the most intriguing military captured UAP footage I have ever seen.

The context surrounding this content is important to understand - as its evidentiary value is best demonstrated through the lens of provenance. I want you to understand why this new evidence is worth your full attention - if it's not inherently obvious to you.

As an investigative filmmaker and journalist working in the field of UFO research - I receive anonymous communications and data drops on a daily basis. It's something I asked for publicly, long ago. I provided my contact information and prompted for people to reach out with cases and leads regarding the UFO phenomenon. I've repeated this request on radio, television, and popular podcasts.

Over the years the influx of data coming my way has grown to become almost unmanageable. I now receive no less 900 actionable communications a month - often with large attachments of audio, photos and video. I do my best to review and sort these leads into priority categories - top priority given to the best physical evidence with the highest possibility of being corroborated by multiple reliable witnesses. Military reports typically take the top position in my sorting hierarchy - due to the extensive and quality documentation often mandatorily performed due to the bureaucracy inherent within governmental operations.

Verifying the authenticity of obtained materials is the next step. This usually proves to be an exhaustive and lengthly process. I utilize a trusted network that I have built over the years when vetting potentially sensitive information. Investigative reporter George Knapp is always my first call, as he has navigated these murky waters for decades prior to my own efforts. By combining forces, we are capable of tapping contacts within almost any industry - including military and intelligence.

An example of this hurdle in reporting - is that I could have some great images and video of UFOs from military sources - but if I can't verify the origin and custodianship of the evidence... I have a policy to not pursue or publish.

The information related to this case was no different. I obtained the materials quite some time ago in an anonymous data drop. Included was detailed written context to accompany each item. My challenge was in activating my network in an attempt to validate or disprove some of the claims and details provided. This is done both through mining the materials themselves for revealing metadata - as well as - finding those who would have knowledge of the events described or who are confirmed to be in a position to have direct awareness of the items I obtained. This took time - seemed ages to me - but it paid off. George Knapp and I were able to verify the materials you are about to consider. I can confirm their authenticity - as well as - the narrative supplied to me when they were presented.

These are authentic photos and video from actual military encounters with UFOs - generated to educate high-level intelligence officers within our military on the nature and presentation of the UAP / UFO phenomenon.

Here is what I know about this footage and about the intelligence briefing that contained them.

"Recent UAP interactions have been put in our path with purpose, and should be looked upon as advantageous opportunities for future research. With every incursion, overflight and potential midair - it has never been more prudent to investigate this UAP phenomenon and deglamorize the UFO stigma through the ranks."

What's presented here is genuine UFO / UAP footage - evidence - with an impressive provenance. These are images and videos shot by our US Military - during a variety of UAP encounters. Incursions - by Advanced Transmedium Vehicles of unknown origin - interacting and observing our Navy's warships and fleet deployments in restricted airspace. The Night Vision and FLIR technologies represented in this content, in this case, is tied into some of the most sophisticated weapon systems known to humankind. The evidence here must be differentiated from other UAP documentation - due to the context of capture alone. Collectively, this data drop represents a small section within a large mosaic of UAP awareness by our DoD. And its presence in a classified series of intelligence briefings - clearly demonstrates how the UAP subject is being viewed, pursued, and handled by the United States defense industry.

It is my hope that these materials will be representative of a unique moment in modern history; a possible turning point towards the rational and transparent approach of investigating and exploring the mystery of the UFO Phenomenon. 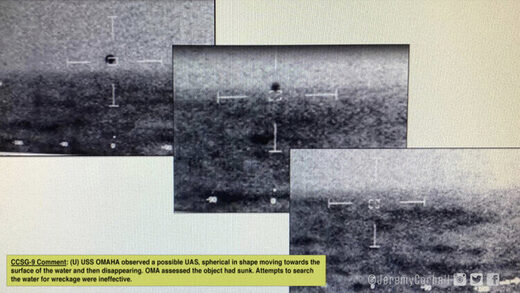 NOTE : It's important to mention that ensuring sources can speak freely and anonymously to journalists and reporters is a key protection provided by Shield Law. These protections of reporters' privilege - are established by the First Amendment and enforced by the Supreme Court of the United States. In a democratic and free society - Shield Law is a counter measure to ensure against the influence of power to deny transparency.