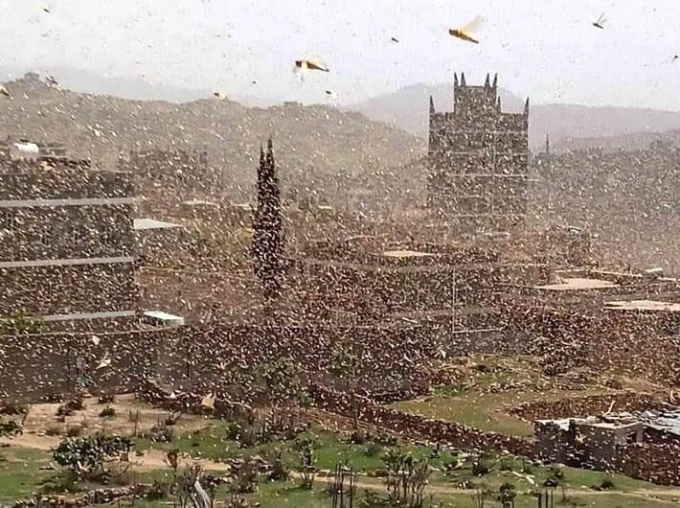 According to the Locust Warning Organization (LWO), the current wave of attack was by pink locusts-- adult locusts with very high capacity to consume and stamina for migrating on a long-distance.

Furthermore, the pink locust is the most destructive among all breeds. At 30 to 45 days old, they already have very strong wings than the usual black and yellow ones. LWO added that these locusts fly in groups, with speed faster than other breeds.

They are also "fatal for rabi crops in progress," said MJ Gujjar, head of LWO. Rabi crops are agricultural crops in India that are sown in winter and then harvested in the spring.

A swarm of locust flying over a field in Jaisalmer, last week. Rajasthan is suffering the worst locust attack in last 60 years. This video can’t capture the magnitude. They were all over the sky, on ground. They hit the windshield like thick raindrops during a very heavy shower pic.twitter.com/q59nLQPtHh

The situation in RAJASTHAN n GUJARAT is getting very worse as the farms attached by billions of Locust Insects n damaged entire crop in no time.@icarindia @AgriGoI @narendramodi @SachinPilot @ashokgehlot51 @narendramodi @vijayrupanibjp pic.twitter.com/2doz8opk3L

Local farmers and assessments by officials showed that swarms of these deadly insects have eaten up 75% of standing crops in Sri Ganganagar, the hardest-hit district.

This new wave of fresh attacks began ravaging crops in October 2019, leaving farmers in distress. The first attacks were reported in May 2019, when pink locusts came flying in from southern Pakistan.

Farmers alleged that for the past eight months since the first attack, the state government had not yet accomplished an assessment report, nor had taken efficient measures to monitor the swarms of locusts flying in at regular intervals.

Soha Lai Bishnoi, a farmer of 12KND village in Sri Ganganagar, said they are doing everything to scare off the locusts. "We have been spraying pesticides, playing loud music."

"Rajasthan witnessed first locust attack in May 2019 and since then, everyone, including the agriculture department, Locust Control Organisation (LCO) and others, has been merely spraying pesticides," said Kisan Sangharsh Samiti spokesman Subhash Sehgal

"This is the biggest-ever attack. Can’t they find out why the attack is still unstoppable and uncontrollable? If breeding is happening in Pakistan, the state administration should urge the Union government to talk to their Pakistani counterparts to control it."

On the other hand, LCO-Jodhpur deputy director KL Gurjar said he has been surveying the damage in the villages of Sri Ganganagar and Bikaner. "I think the menace is under control in the state, except Sri Ganganagar and Jaisalmer districts," he said.

"A good monsoon, greenery, and moisture have been the reasons behind the excessive presence of locusts this year. We have ample pesticides and are checking their movement to control them while they are settled in non-farming areas."

Seghal said they have written to Prime Minister Narendra Modi for his intervention in rushing the relief process. "We demand compensation of 20 000 rupees (280 dollars) per acre to each farmer."